David co-manages the Anchor Global Technology Fund (and is the manager of the Anchor Worldwide Flexible Fund) and has been with Anchor since July 2012. Prior to joining Anchor, David was at Stanlib.

Tech is close to accounting for 30% of US stock market value and 20% of global stock markets’ value. SA is in line with the global average, with SA’s sole major tech company – Prosus/Naspers – representing some 20% of our market.

At Anchor, we believe that our clients should be offered the opportunity to invest directly in this exciting sector. The prevalence of network effects in the tech sector has made it an extremely lucrative area for investors – over the long term. Fortunately, Anchor has the appropriate in-house experience (Anchor’s Global Tech unit) to offer this opportunity to our clients, hence the launch of the Anchor BCI Global Technology Fund in June 2019.

What makes the tech sector different?

Network effects are probably the most important attribute. As Brian Arthur described in his seminal piece in the Harvard Business Review in 1996 entitled ‘Increasing Returns and the New World of Business’, knowledge-based industries such as tech work differently to traditional processing industries. He wrote, ‘increasing returns are the tendency for that which is ahead to get further ahead, for that which loses advantage to lose further advantage.’

Think of the social media site Facebook in the 2000s as it strove to gain users. At first, the company targeted the university campuses before spreading its net wider – with the number of users soaring as the depth and breadth of the Facebook community became better and better. Who wanted to remain on MySpace and Friendster when everyone was shifting to Facebook? What happened over time was that users began to lock-in to Facebook and abandon other social media sites. If locking-in happens en masse (like Microsoft’s dominance in PC software), then tech products tend to establish monopoly positions in their markets.

Network effects partly explain why the five largest companies in the world by market capitalisation are all in the tech sector (I am cheating by ignoring the recent listing of Saudi Aramco – the Saudi state oil business – which is now the largest company in the world). 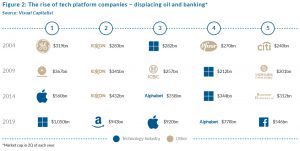 Most of us were schooled in the Benjamin Graham – Intelligent Investor – approach to understanding traditional processing companies.

Think of this as the East Coast (of the US) approach to investing, where company balance sheets are important and where income statements lend themselves to calculating price earnings (PE) ratios and returns on equity (ROE).

We spent less time on the somewhat racy approach on the West Coast (i.e. Silicon Valley) of user growth, lock-in and delayed monetisation of the fast-growing tech companies.

Here the balance sheets didn’t seem to have many tangible assets and income statements were expensing vast amounts of money on research and development (R&D). Frankly, traditional financial statements don’t provide a particularly insightful view on the world of a tech company.

Investors often struggle to be good at both the East Coast and West Coast approaches to investment partly because they don’t realise that they require different mindsets.

With tech shares having performed so well over the past decade relative to the broader market – is it too late and too risky to invest now?

There is no doubt that regulatory risks for the major tech platforms (Alphabet, Amazon, Apple and Facebook) have increased sharply in the past two years. With these tech firms having done more or less as they please in the past, the state is under pressure to reign them in. The question is how to do this. The Economist magazine expects a ‘grinding war of attrition’ over the next few years once regulators have established how to tackle the technology giants.

Core holdings are companies that have established market dominance in their expanding fields. Examples include Alibaba, the e-commerce giant in China, and Alphabet, the search giant in the western world. Core holdings are, typically, profitable and highly innovative businesses – and, depending on how attractively they are priced on global stock markets, may represent large weightings in the portfolio.

Emerging holdings represent the newer areas in tech, like Delivery Hero – the online food delivery company. These businesses are far riskier investments and are weighted accordingly in the portfolio. But they offer enormous potential for value creation if they are later able to establish market dominance in a brand-new category.

An area we are watching with great interest is quantum computing – the field of computing that will succeed classical computing (i.e. the computers of today). Google recently claimed its experimental quantum chip had completed a specific calculation dealing with random numbers in 3 minutes and 20 seconds. The Google researchers estimated that it would have taken the world’s most powerful supercomputer 10,000 years to reach the same result. Google, Microsoft, IBM and some smaller players are vying for an early lead in this new tech category. IBM is wanting to bring quantum computing into mainstream business use within the next ten years. It is possibly too early to pick a leader in this field, but we certainly will do so when, and if, this becomes apparent. Quantum computing will have profound implications for solving complex calculations about climate change, etc.

Since the 1970s we have seen three major trends in tech. These trends typically change every twenty years or so. The 1970s and 1980s was the time of Integrated Circuits – which facilitated computation at a level never seen before. This enabled the boom in personal computers. The 1990s and 2000s was the era of Digital Networks as computers and other devices became connected through various networks (fibre optic, wireless etc.). This facilitated offshoring and arguably boosted a strong period of globalisation. According to Brian Arthur, the 2010s and 2020s is the era of ubiquitous Sensors, providing enormous amounts of data that will fuel artificial intelligence. Computation, Connection and now Intelligence (AI) – and, arguably, the last of these major trends (i.e. AI) will have the greatest impact on the workplace.

The tech sector is a large component of global stocks markets. However, there are variations across the world with certain areas being heavily represented in tech, like the US (primarily Silicon Valley) and China (Beijing, Shanghai and Hangzhou), while other areas such as Europe and the UK are under-represented in tech. South Africa has one stellar platform company – the Naspers/Prosus group.

Network effects are prevalent in the tech world and this partly explains why the five largest companies in the US by market cap are all tech businesses.

Tech shares have performed better than the broader stock market over the past decade but, unlike the tech bubble of the late 1990s, this has largely been driven by strong earnings growth from the underlying companies. Market forecasts suggest this will continue in the years ahead. Alphabet, Amazon, Apple and Facebook are likely to face increased regulation in the future, which may curb certain of their activities.