Anchor rand view: Russia’s invasion of Ukraine and its impact on the rand and bonds 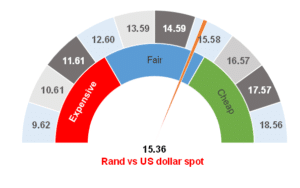 At the time we published The Navigator: Strategy and asset allocation report, 1Q22 on 16 January 2022, the rand was at R16.00/US$1. Our view, at the time, was that the rand would appreciate slightly against the greenback and probably hover just weaker than R15.00/US$1 for much of 1Q22. This view was based on the terms of trade remaining favourable and on a gradual, but protracted, rate-hiking cycle both in South Africa (SA) and in the US. Uncharacteristically, the rand behaved and did what we were expecting. A well-behaved currency made it unnecessary to update our rand views. However, with Russia’s invasion of Ukraine, much has changed. We have written about the minor trade and investment linkages between the local economy and the economies of Russia and Ukraine and the direct impact on SA is negligible (see our noted entitled Russia’s invasion of Ukraine: How will it impact the SA economy?, dated 8 March 2022).

Instead, we are faced with impacts from other avenues which include:

Looking at the rand, we are somewhat surprised that it has been so impervious to the negative EM sentiment and to bond outflows. For now, there is differentiation in the currency market between countries that are directly exposed to the conflict and those that are removed. We have seen the currencies of other commodity producing countries also hold up well. Our assessment is that if this escalates, then there is a point where all EM currencies will behave similarly, and the rand will capitulate. For now, the nature of our export basket, high interest rates, and limited contagion mean that we are being treated as one of the ‘good’ currencies to own.

We have adjusted our fair yields for bonds by c. 0.25% to 0.40% higher than they were previously. What this means is that we continue to think that bonds are cheap, even adjusted for the ‘new world’. We expect that bonds will bounce back from their recent sell-off once ETF selling dissipates. Unfortunately, we are in a position where we expect that the Anchor BCI Bond Fund and the Anchor BCI Flexible Income Fund will report losses this month, although it is too early in the month to guide as to the likely final outcomes.

We are watching the pace of ETF flows (which seem slower over the past 48 hours or so) and the oil price for short-term direction on how the market is likely to behave. Longer-term, it is going to be about keeping our inflation in check and making the most of the higher prices for the commodities that SA is producing. We have bought a few US dollars in our portfolios as a hedge. Our base case is that the rand will continue to confound by remaining strong, however, it makes sense to sell a small portion of rand for US dollars below R15.30/US$1, just in case our assertions are wrong. 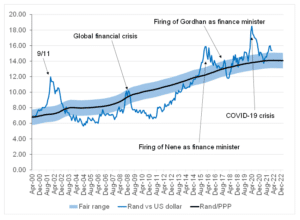