Russia’s invasion of Ukraine: How will it impact the SA economy?

As we move further into March, Russia’s invasion of Ukraine continues to dominate headlines, with markets now starting to worry that the war will persist substantially longer than the quick conflict originally anticipated. A lengthy invasion will have more severe effects on global supply chains and commodity prices. Sanctions against Russia are deepening, with global discussions now on banning/limiting the import of Russian fuels. At the time of writing, the Brent crude oil price had spiked to US$128.7/bbl, with the risk of it now reaching US$150/bbl. Consequently, strategic oil reserves have been released into the markets to attempt to quell the price pressure. Overall, the response by largely Western nations has been substantial, coordinated, and committed but Russia remains unwavering in its ambitions for Ukraine. While global hope for a more peaceful resolution remains, it will not be easy (or necessarily quick) to attain, and markets are beginning to reflect this. Given the fluid nature of the conflict, at this point, it is almost impossible to accurately estimate the full global economic cost. Nonetheless, key macroeconomic, market and credit implications could come in the form of:

This list is by no means exhaustive, and it is important to highlight that these shocks are likely to be asymmetric across regions, with Europe, the Middle East, and Africa expected to be hit the hardest overall (albeit unevenly across countries, according to their dependency on Russian energy) and the US less so. Sensitivities for other regions, countries, and sectors depend more on energy usage and trade patterns.

If we consider South Africa (SA) in particular, Russia’s invasion of Ukraine is likely to have several implications for the SA market, business, and the overall economy. Whilst SA has some direct trade and investment links with Russia and Ukraine, they are quite small. Although SA exports to Russia have increased over the past three decades, it has not risen meaningfully since joining BRICS (Brazil, Russia, India, China, and SA). SA exports to Russia rose by an average of 5% p.a. since joining BRICS. This compares with the average export growth of 30% p.a. in the decade prior.

SA imports from Russia increased by an average of 23% p.a. since joining BRICS. This compares with the average import growth of 38% p.a. in the decade prior. In 2021, SA’s exports to Russia stood at c. R6.1bn (0.3% of total SA’s total exports), while imports from Russia were at R9.2bn (0.7% of our total imports). SA exports mainly edible fruits and nuts, peel of citrus fruits and melons, ores, slag, and ash, nuclear reactors, boilers, machinery, and mechanical appliances to Russia while importing mainly copper and articles thereof, fertilisers, and mineral products from Russia. In our view, local importers will likely be able to secure alternative sources of supply for copper goods and petroleum products. However, since Russia is a major global producer of fertilisers (accounting for 13% of world fertiliser exports in 2020), its potential removal from global supply chains could have a major impact. For SA exporters, particularly those awaiting payment from Russia for goods already shipped, the situation will also be difficult. In addition, trade with Ukraine was even smaller and is therefore fairly negligible. 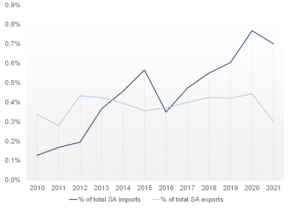 Investment linkages between Russia and SA are also quite small. Thus, we believe that it is the indirect effects of the Russia/Ukraine conflict on commodity prices that are relevant to SA and the impact of the war on global growth and investor appetite for risk that is likely to be more significant. Prices of commodities such as oil, coal, precious metals, and grain have increased rapidly, and some commodity price gains (for example coal and precious metals, such as iron ore) are beneficial to SA. Nonetheless, higher oil and grain prices will also push local inflation higher and, subsequently, place pressure on the already burdened SA consumer.

More generally speaking, even though the direct trade and investment linkages are tiny, SA is still likely to be significantly affected via three broad indirect channels. The first channel of these is via the impact of the conflict on commodity prices that are relevant to SA. The second is via the stagflationary shock which the conflict is likely to impose on the global economy. The third channel is via the contagion channel, in which a general increase in risk aversion sparks the flight of capital to safety. Consequently, we believe that the further anticipated upward price shocks cement the case for a 25-bpt rate hike at the SA Reserve Bank’s (SARB’s) Monetary Policy Committee (MPC) meeting later this month. The SARB has previously said that it ‘looks through’ the first-round impact of supply shocks such as these to fuel and grains, but it has also said that it is less tolerant when there are multiple price shocks hitting at the same time, because these increases for relatively price-inelastic essential goods may easily spark some second-order effects. For example, higher fuel prices increase distribution costs for food producers and public transport prices. High food and fuel costs might contribute to higher wage demands and/or cause inflation expectations to rise.

As Figure 2 illustrates, fuel prices impose a pattern on headline CPI. Although fuel directly accounts for only about 4.8% of the CPI basket, nearly all the patterns in headline CPI movements are driven by patterns of fuel price inflation. Naturally, oil prices would not rise indefinitely. At some point, oil prices peak out and then base effects would eventually pull fuel price inflation to zero. Nonetheless, the impact on the SA economy and the rand is somewhat shielded from the estimated increase in SA’s terms of trade on the back of higher export commodity prices – notwithstanding higher oil prices. 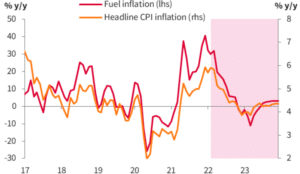 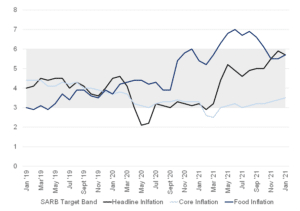 Overall, the indirect effects of the conflict on commodity prices and on global growth and investors’ appetite for risk are likely to be more significant than any direct links. However, attempting to fully assess the economic impact of the conflict is incredibly difficult and, at this point, given the fluid nature of the conflict and elevated uncertainty, precise estimates are impossible to quantify.