After listing on the JSE in late 2016, Dis-Chem has quickly become one of the better compound-growth stories on the JSE. Given what appears to be a lengthy growth runway, we believe investors can look forward to earnings growth of over 20% p.a. over the medium-term as the store base matures and as positive operating leverage flows through to the bottom line on the back of growing scale.

After a period of investment in wholesale distribution capacity in 2018 weighed on the share price, we believe this to be an opportune time to invest in the business.

Dis-Chem has developed the ability to open and scale-up new  stores in an impressively short time frame. Trading density typically grows from R27k in annual revenue per square meter in the store’s first year of existence to over R100k in year 3.

At the EBITDA level, a typical store will break even in year 1 and will reach an EBITDA margin of 10%–11% by year 3. At an operating profit level, the stores will make a positive contribution in year 2.

This rapid maturation process is fairly linear and, given Dis-Chem’s recent store expansion (20 new stores in 2017 and a further 21 new stores in 2018), we expect meaningful revenue growth and positive operating leverage to flow through in 2019, 2020 and 2021. 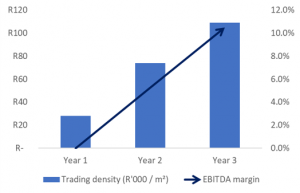 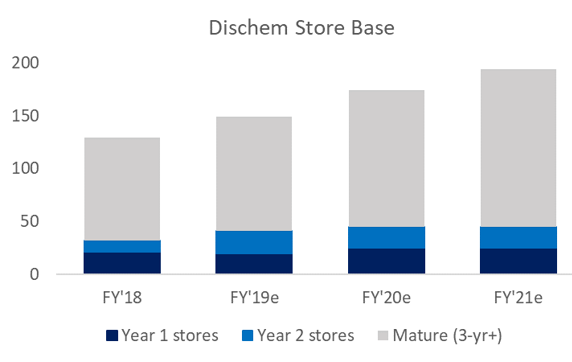 Dis-Chem’s investment into an additional 13.5k m² wholesale space in Cape Town over the FY18 period resulted in the division posting an operating loss of R180m. This disappointed the market, putting pressure on the share price and creating what we view as an attractive entry point.

The additional wholesale space is a necessary investment to cater for the group’s retail footprint expansion plans, and the drag on group earnings is a temporary function of sub-scale operations, which should already start to break even at the EBITDA level in FY19.

We expect positive operating leverage in the wholesale division to start to kick through in FY20 as new stores give the division the necessary critical mass (as illustrated below):

The Single Exit Price (SEP) mechanism, governed by the Medicines and Related Substances Act, regulates the rate at which pharmaceutical companies may increase the prices of their products. 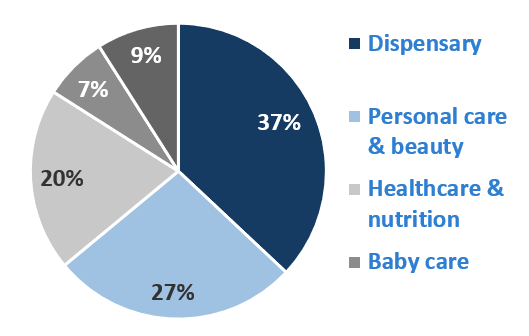 The formula used to derive the SEP price increases is shown below:

Given our long-term expectations for each of these key inputs, the dispensary business should benefit from annual price increases of 4% – 6% p.a.

The normalisation of these variables should hence prove to be a significant tailwind for the business going forward.

In considering the longer-term growth prospects for Dis-Chem, it is imperative to acknowledge the vast scope for growth relative to its primary competitor Clicks.

Dis-Chem currently operates a base of just 130 stores – a number which pales against Clicks’ much larger base of 640 stores. 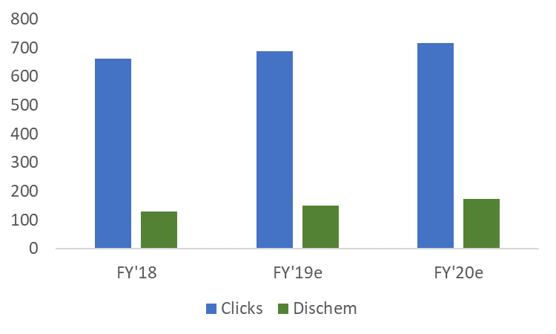 Management have guided that Dis-Chem will hit the 200-store mark around 18 months sooner than originally communicated, implying around 25 new store openings in both FY20 and FY21.

Naturally, this bodes well for the trajectory of group margins as the group expands its presence across smaller convenience-type shopping centres. 40% of Dis-Chem’s new store pipeline consists of these smaller-format stores. 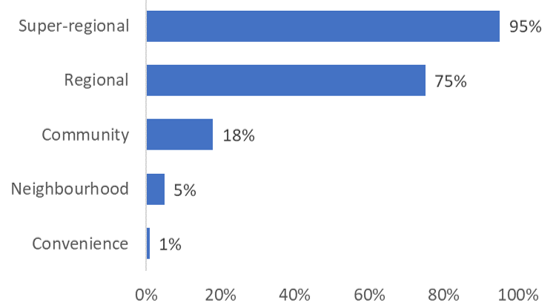 Dis-Chem’s management team have communicated specific medium-term guidance on targeted margins, which again points to positive operational leverage flowing through as the store base matures, and as the wholesale business gains critical mass.

Additionally, the SEP adjustment in 2018 was unusually low and we expect the normalisation of this legislated pricing adjustment to further aid the expansion of group operating margins.

Although the group’s current and guided dividend payout ratio lags that of Clicks, we believe it is appropriate given the group’s growth ambitions. As the business matures, we would expect the payout ratio to increase.

Assuming the group consistently delivers at the mid-point of guided margins, and factoring in the stated store opening targets – we expect the group income statement to progress as follows: 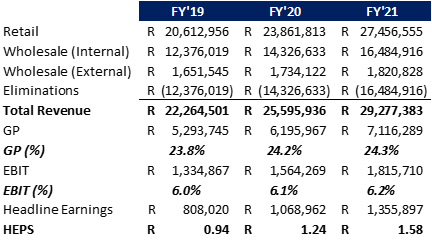 Dis-Chem’s valuation is attractive in relative terms, given the 25% CAGR in expected earnings over the next 3 years as compared to Clicks’ expected 13.5% CAGR. Although a forward earnings multiple of over 28x represents a material premium to the retail sector in general – this unwinds fairly rapidly to  19x over the next 3 years.

We believe there is certainly a “growth premium” inherent in both Clicks’ and Dis-Chem’s ratings given the low-growth environment we find ourselves in. We expect that this will sustain, provided Dis-Chem maintains a strong double-digit earnings growth profile (and we think it can). 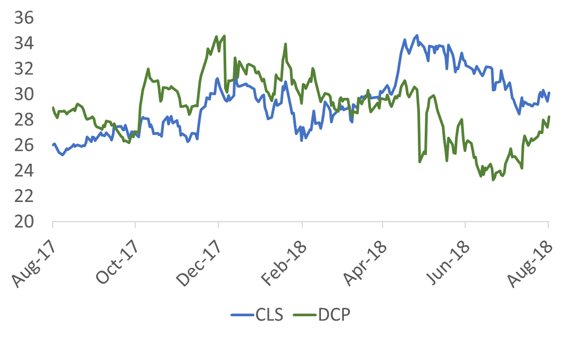 The combination of maturing stores, potentially significant positive operating leverage to come through from the wholesale division, and the normalisation of key input variables into the SEP pricing equation make for a compelling investment case with c. 28% upside. 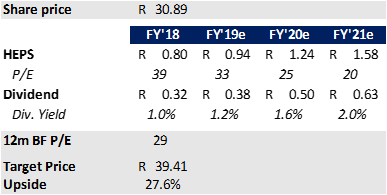