Naspers: Update on the Naspers/Prosus discounts

As a reminder, Naspers sold 22mn Prosus shares in an accelerated bookbuild on 22 January 2020. This equates to a 1.4% stake in Prosus, thus lowering Naspers’s holding in Prosus to 72.6% (from 74% previously). To recap, Naspers placed the shares at a discount of c. 4% to Prosus’ closing price on 21 January 2020 and raised c. EUR1.5bn (R24bn), which Naspers said it intends to return to shareholders via a share buyback of Naspers shares.

Figure 1: Naspers and Prosus’ discount to NAV since Naspers announced the plan to list Prosus 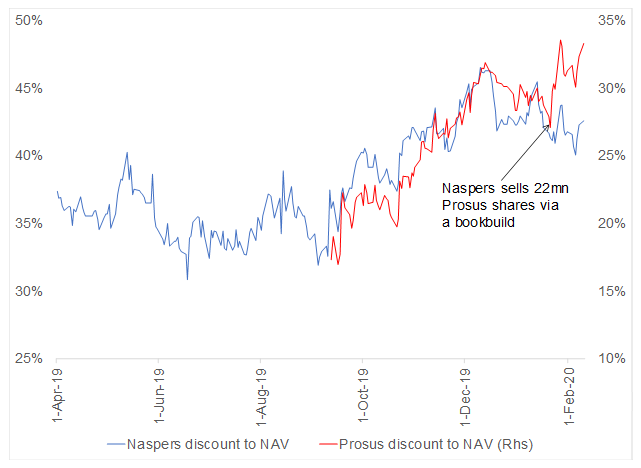 Looking at what has happened to the gap between the two discounts, unsurprisingly, this has narrowed since the bookbuild was done and is now at the smallest gap since the listing of Prosus took place on the Euronext exchange and the JSE in September 2019.

Figure 2: Gap between Naspers discount and Prosus discount to NAV 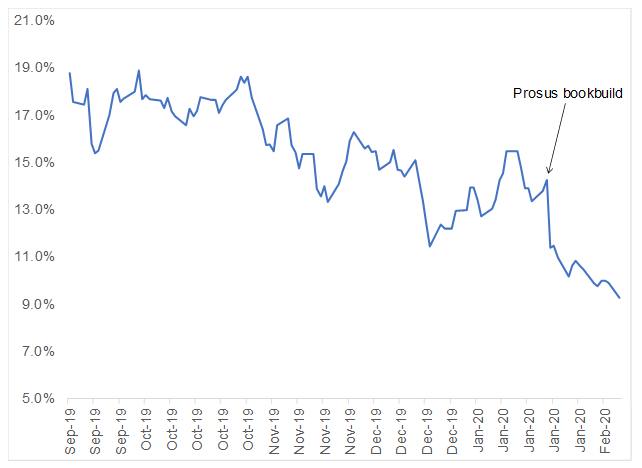 According to an announcement following the bookbuild, Naspers has a 90-day lockup on its remaining Prosus holding. It is also worth considering that if Naspers’ stake in Prosus falls below 70%, it loses certain conglomerate tax benefits. We believe those relate to Naspers’ ability to move investments around within the group without triggering a capital gains tax (CGT) event.

While Naspers could sell down a further 2.6% in Prosus after the lock-up period ends, with the gap between the discounts having narrowed to the extent that it has, in our view, it doesn’t appear attractive for Naspers to continue to do this. Therefore, we would be surprised if the best idea management has to reduce the discount at which Naspers trades to its NAV is to periodically dribble Prosus shares into the market (thus creating a Prosus overhang in the process) and then carry market and currency risk while it buys back Naspers shares with the proceeds. In short, we doubt that we will see Naspers announcing an accelerated bookbuild again soon, unless the discount gap widens materially.

To date, our view has been that for new money all the optionality around closure of the discount lies in Naspers. We maintain this view for investors with a long-term investment horizon. However, for non-tax sensitive investors, with the discount gap having narrowed so much, there may be a shorter-term opportunity developing in Prosus. Should a new source of demand appear for Prosus shares, we could well see the gap in the discounts widen again, even if that proves temporary. One source of such demand might be passive interest if Prosus is included in the Euro Stoxx 50 Index later this year. The decision around index inclusion typically takes place in September, but it can happen earlier if one of the existing Euro Stoxx 50 members disappears as a result of corporate action. Keep in mind, of course, that it is not a foregone conclusion that Prosus would get into the Euro Stoxx 50, as it all depends on Prosus’ market capitalisation at the time.