Naspers: The Chinese tech sector crash and its significance for SA investors

The accelerating decline in Tencent’s share price over recent days means that the share has now fallen by 42% from its all-time high, reached in February 2021. While it will serve as little consolation to investors who have likely suffered considerable losses on their investment exposure to this market, as the Chinese regulatory crackdown on its technology (tech) sector continued to widen, we note that this share price drop only takes Tencent back to levels last seen as recently as June 2020. Even after the recent decline, Tencent has still delivered compound growth of more than 20% over the past 6 years. 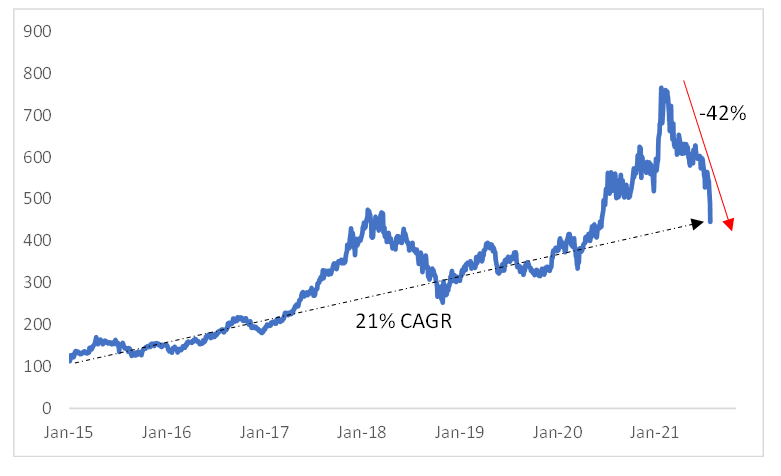 Naspers, for which its 29% shareholding in Tencent accounts for c. 82% of its underlying net asset value (NAV), has understandably fallen in sympathy with Tencent, declining by 34% from its February high. In this case, the fact that its share price has fallen by less than that of Tencent is entirely thanks to rand depreciation over the intervening period. We have been skeptical of the view that Naspers’ large discount to NAV would provide much protection for Naspers shareholders in the event of a large Tencent share price drop and, this time around, the discount provided very little protection.

Turning to the reasons behind the sharp fall in Chinese equities and tech counters especially, we note that this has been receiving extensive media coverage and it is not the intention of this note to address what has happened in detail. Briefly, the regulatory crackdown began with an eleventh-hour cancellation of Ant Group’s IPO last November, which triggered scrutiny of the financial technology (fintech) structures and practices being used by China’s tech companies. This move by the Chinese government was followed by a clampdown on what were identified as anti-competitive practices in the industry, which appeared to target the e-commerce players in particular. Hope among investors that the celebration of the 100th anniversary of the Chinese Communist Party in June marked the end of the regulatory crackdown were dashed when the Cybersecurity Administration of China (CAC) forced the removal of DiDi Global’s app from online stores just days after its US IPO, due to data security concerns. The dramatic sell-off in recent days follows the latest salvo by Chinese regulators – a sweeping regulatory overhaul of the private online education sector, which threatens to  completely upend the business model by requiring, among other things, that this industry convert into a not-for-profit model, while Tencent Music has been forced to give up its exclusive rights to music.

The severity of the latest selloff likely reflects the degree to which investors are reevaluating previously held beliefs about Chinese regulators’ willingness to cross perceived red lines. Aside from wondering which sector may be next in regulators’ crosshairs, anxiety has also mounted around a longstanding area of ambiguity – the use of “variable interest entity” (VIE) structures by Chinese companies to list offshore. These structures have enabled companies in sensitive sectors (such as technology) to get around the rules that prevent ownership by foreigners of their assets and intellectual property (IP). The listed entities outside of China, in which international shareholders hold shares, merely have a contract that gives them rights to the economics derived from the assets and IP, without any ownership of the actual assets in China. While up to now, Chinese authorities have tolerated these structures, their legal status has never been made completely clear. Consensus has been that, having never challenged them before and with China seeking greater inclusion in global capital markets, to declare such structures illegal has been seen as an extremely remote risk. Suffice to say that recent regulatory moves have reignited the debate about whether China’s regulators may be willing to nullify VIE agreements in certain instances. To be clear, there is no indication that China will threaten these structures, but their actions in recent months heighten anxiety. It is not our intent to scare investors and any threat to the status quo would amount to economic warfare on the part of China and would have implications well beyond the tech sector.

With the above brief overview of the multi-pronged regulatory crackdown on the Chinese tech sector and the ensuing re-evaluation of the risk of investing in this market, this brings us to the all-important question of what action investors in Naspers and Prosus should take at this point. We have long expressed the view that, regardless of the undoubted appeal of the investment case in more benign times, the unpredictability of Chinese regulatory priorities and the possible disregard for the interests of international investors, mean that one needs to manage this risk through controlling the size of one’s exposure to these shares. While it is extremely unsettling to experience share price falls of this magnitude, we believe that it is important to maintain a cool head at this point and to consider the following:

In summary, falls of the magnitude we have seen in recent months for Chinese tech companies do not happen without good reason, particularly when they occur alongside relatively buoyant global equity markets. Maintaining a cool head and remaining objective about how unfolding regulatory events impact the fundamentals for the companies concerned is critical. Undoubtedly, even if the intensity of regulatory intervention recedes in the months ahead (as we hope it will), elevated equity risk premiums for Chinese equities generally, and some downside risk to earnings as companies adjust to the new rules of the game, mean it is likely naïve to expect a return to “business-as-usual” anytime soon. We believe, however, that as things stand now, the right approach is to hold fast.

Our base case is that we are close to the end of the “regulatory cycle”, but we cannot predict this with certainty. Although investors have widely criticised the exchange offer in terms of which Naspers shareholders have the option to tender 45% of their shareholding in return for Prosus shares, as we have explained in our previous article on this deal, it will result in an uplift in the NAV per Naspers/Prosus share of between 6% and 10%. This exchange offer becomes effective on 16 August. A further US$5bn share buyback, due to commence thereafter, and the anticipated increased index weighting for Prosus offshore may also lend some support at the margin. These developments should lead to a much clearer investment backdrop in the months ahead. It is in this environment that we believe investors should be evaluating how the experience of events currently unfolding in China should change their investment exposure to this market. While the best course of action right now may be to do nothing, equally, guard against the tendency for greed/complacency to take hold as fear recedes.