Naspers/Prosus: Another difficult choice ahead for Naspers shareholders

As was widely expected by investors, Naspers/Prosus recently announced the next step in its plan to unlock value. The deal announced on 12 May, however, was probably not among the possibilities that investors had considered likely and, judging by the widening discount at which Naspers and Prosus have traded relative to their net asset values (NAVs) since this announcement, investors are distinctly underwhelmed by it. Considering the effort put into evaluating the various options available to unlock value by management, the fact that this was considered the best available option speaks volumes for the formidable tax and exchange control complications that confront the alternatives this Group has to unlock value. While this proposal does increase the NAV/share modestly (if it is accepted by shareholders), it comes at the expense of the creation of a large cross-holding structure, which adds complexity (investors hate complexity!), as well as removing the prospect for other corporate actions that would unlock value without significant tax consequences for the Group.

Furthermore, for private investors that hold Naspers shares in a tax-sensitive form, as was the case with the offer to take up Prosus shares when it listed, we think this latest proposal will create a difficult choice for them – accept the offer to exchange a portion of their Naspers shares for Prosus shares, thus securing a slightly enhanced uplift to the underlying NAV of their holding, but with the unwelcome consequence that it will trigger a deemed disposal of those Naspers shares and thus a tax event for those shareholders. What the correct choice is very much depends on each investor’s personal situation and what their subsequent intentions are for their investment in this Group.

The proposal in a nutshell

The main terms of the announcement are as follows:

How does this deal change the Naspers/Prosus structure?

Should all shareholders accept the offer, the consequence would be that the ownership structure of the Naspers/Prosus Group will change as depicted in Figure 1 below. We note that, as a consequence of Prosus buying Naspers shares as part of the current share buyback programme underway, a cross-holding (a situation where both Naspers and Prosus have a shareholding in one another) has begun. A consequence of the proposed offer by Prosus to acquire a portion of Naspers shareholders’ holding in return for Prosus shares is that this cross-holding will become significantly more material.

Figure 1: The ownership structure of the Naspers/Prosus Group pre- and post-transaction 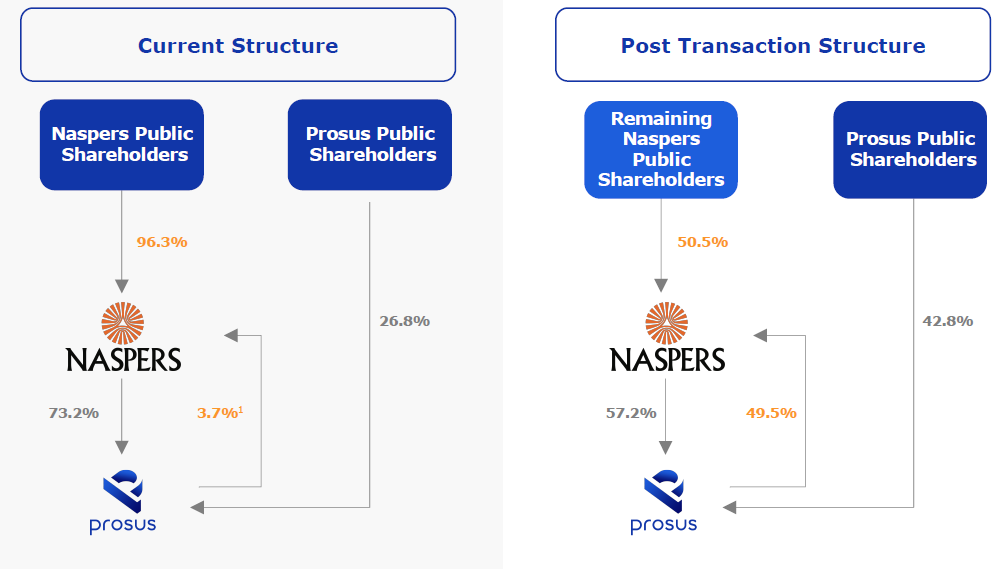 1. 3.7% estimated interest in Naspers held by Prosus once US$3.63bn buyback is completed.

Management’s rationale for the deal

In support of this deal, management highlighted the following benefits that it achieves:

The impact of the deal for shareholders

Although Naspers owns businesses such as Takealot and Media 24, these are completely immaterial in the context of the overall NAV of the Group. Thus, investors typically ignore them and focus on its investment in Prosus and the look-through discount at which it trades to the portfolio of investments that Prosus holds. At the time of writing, Prosus trades at a discount of c. 35.5% to its NAV, while Naspers trades at a c. 49% discount on a look-through basis to the same assets. Figure 2 below shows how these discounts compare to their respective histories. 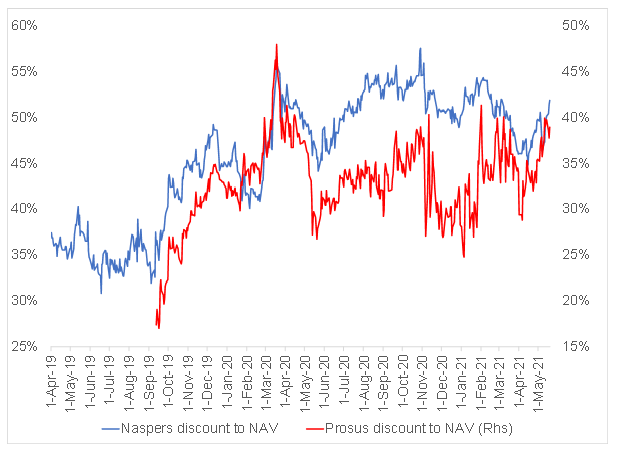 Another point to bear in mind is how the gap between the two discounts to NAVs have trended over time (see Figure 3 below). In recent months, the gap has been narrowing, implying that Naspers has been outperforming Prosus. This was possibly the result of investors positioning themselves in anticipation of a value unlock transaction in which Naspers shareholders stood to benefit more than Prosus shareholders. 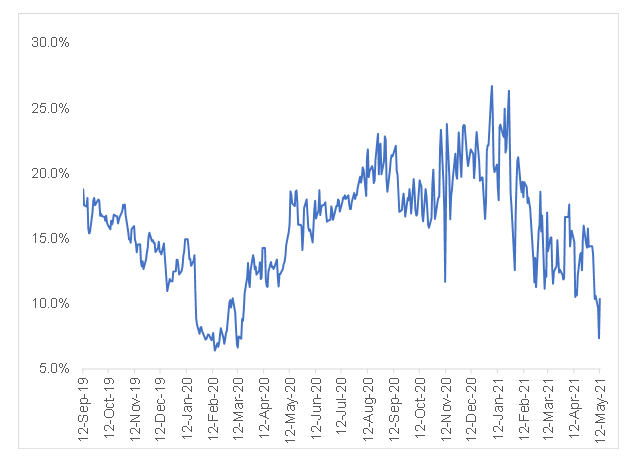 Although the gap between the two discounts has narrowed, the mechanics of this deal are still that, by using Prosus shares, which trade at a narrower discount to NAV, as the “currency” to buy the more deeply discounted Naspers shares, the result is that there is an uplift to the NAV underpinning the shareholdings of both Naspers and Prosus public shareholders. “Public shareholders” is a term which investors in this Group will have to get used to – it is the shares held by parties outside of the cross-holding that has been created. According to our calculations, assuming all shareholders accept the offer, the uplift to NAV will be as follows:

The market’s reaction and our thoughts on the deal

Although an announcement of the next step aimed at unlocking value was widely anticipated by investors, we think the current terms are quite different to the possibilities that were considered. Among these options was a further distribution of Prosus shares by Naspers, thereby reducing its shareholding in Prosus to 50.1%. The fact that, once investors had begun to understand the deal announced, the discount of both Naspers and Prosus widened, has sent a clear message that investors are disappointed that, after such extensive analysis of all the options available, this is the best that management could come up with. While there is an uplift to NAV for shareholders, and the points made by management are acknowledged, there are some drawbacks that have been glossed over. These include:

We are underwhelmed by this deal and we are also concerned about how the complexity introduced by the cross-holding structure might impact the discount over the longer term. Nevertheless, we think the deal will likely be supported by a significant majority of shareholders for two reasons:

For those that do not trigger any tax consequences by doing so, mathematically it makes sense to take the Prosus offer and thus benefit from the greater uplift to NAV. For those that face the prospect of triggering CGT by taking the Prosus offer, the right choice will come down to personal circumstances. For long-term Naspers shareholders sitting on significant unrealised gains, it is very likely that the tax triggered will more than offset the additional NAV uplift available by accepting the Prosus offer. However, even for these shareholders, it may be worth considering whether it might be worth triggering the gain and at least benefitting from some additional NAV uplift to fund part of the CGT. If we are right that there is no obvious next step likely to unlock significant value that follows this deal, triggering the gain now would offer the opportunity to look at one’s exposure to Naspers/Prosus afresh.

As for our relative preference between Naspers and Prosus going forward, we have historically favoured Naspers on the basis that the larger discount and the potential to distribute further Prosus shares meant that the optionality for greater value unlock resided in Naspers. While Naspers’ outperformance over Prosus in recent months means that was the correct relative call, the deal announced achieves a much more balanced benefit to Naspers and Prosus shareholders than expected. With the gap between the two discounts relatively narrow vs history, prospects for further corporate action to unlock value are remote for the time being, for a fresh R100 invested today, we are now largely indifferent between the two companies.