Anchor tech strategy: An overview of the global tech sector performance for 9M21

Having lagged in 1H21, the tech sector has now pulled slightly ahead of global markets for the 9 months to end September 2021 (9M21). Strong performances from many of the large global US tech firms over the past quarter (3Q21) have driven this outperformance – with all the FAANGMs (Facebook, Amazon, Apple, Netflix, Google [Alphabet], and Microsoft), barring Amazon and Facebook, rising in 3Q21. We are not in the business of explaining short-term stock market moves, but clearly the resurgence in 3Q21 of the COVID-19 Delta variant is having some impact on the economic recovery underway across much of the world. This may also have shifted investors’ attention back to growth shares, including tech, as the economically sensitive value categories have lost some of their lustre.

As we write this article, markets have entered the tricky season (September/October) when volatility often rises. This season we have Evergrande, the heavily indebted Chinese property developer, in the headlines as markets worry about the company potentially defaulting on its offshore bonds. Evergrande has onerous liabilities of RMB2trn (US$310bn). We also have the apex of earnings growth for 2021 (i.e., the second quarter) behind us and our attention may return to the elevated US inflation levels; the US Fed’s plans for bond tapering; a lingering Delta variant; poor US-China relations; and a likely increase in US corporate tax rates etc. Or the tricky season may pass by, and markets continue to rise. We are in a strong bull market after all.

For Prosus/Naspers shareholders it has been anything but a smooth climb in 2021. The Chinese regulatory storm, which started towards the end of 2020, has gained impetus and virtually the entire tech sector has been impacted (including Tencent). Some are even beginning to wonder if China has now become uninvestable. We provide some thoughts on this below.

As we did last quarter (2Q21), let us take a deep dive into the tech sector to understand what has happened over this latest quarter (3Q21) and in 9M21.

In 9M21, tech has overtaken the FTSE All World Index but slightly lags the S&P 500 Index. US tech has, however, performed significantly better than Chinese tech, a continuation of the trend seen in 1H21. Chinese authorities have intensified their scrutiny of Big Tech in China and have, more recently, expanded their aim to other sectors such as education.

What is unnerving about the Chinese regulatory storm is that there is no end in sight. Big Tech has been guilty of anti-competitive behaviour (for example Tencent and Alibaba and their allied companies have operated like two walled gardens with no interoperability between the two) and this must change. In addition, the Chinese government is prioritising other areas of the tech economy such as semiconductors, artificial intelligence (AI), the cloud etc. which suggests that existing Big Tech – rooted in the consumer internet – is of secondary importance in the country’s long-term plans. This also suggests to us that Big Tech should stay out of trouble and focus on innovation, fair competition within China, and offshore expansion.

For 9M21, the US online advertising giants (Alphabet, followed by Facebook), together with Microsoft, have been the star performers among the FAANGM stocks. Despite the recent good performance from streaming giant, Netflix (as investors have possibly warmed to content deals including Seinfeld and an expectation of improving subscriber growth in 2H21), it and Amazon are now the laggards for the YTD period. Apple has also strengthened of late, due to upgraded earnings forecasts.

As we explained last quarter, the forecasts for advertising growth (especially online) continue to be revised up. With the latest resurgence in the Delta variant, it will be interesting to see what happens to advertising projections for the balance of 2021. The US Fed also recently downgraded its forecasts for 2021 US GDP growth, a key driver of advertising growth, from 7% to 5.9%.

If we delve deeper into the various tech sub-sectors, semiconductors, online advertising, CRISPR genome editing, emerging fintech and the cloud companies have led the way in 9M21. We discussed the semiconductor and online advertising sectors in some depth last quarter (see The Navigator – Anchor’s Strategy and Asset Allocation, 3Q21). Both areas remain in a strong business upcycle and we are closely assessing how long this can be sustained.

CRISPR Cas-9 genome editing is a relatively new field that potentially offers cures for various genetic diseases. It is the subject of a wonderful new book by Walter Isaacson entitled The Code Breaker: Jennifer Doudna, Gene Editing, and the Future of the Human Race. Although the three main companies are yet to launch products into the market, they are all involved in clinical trials. Intellia Therapeutics, the top performer in 2021, is showing great promise in a trial to cure a liver disease known as transthyretin amyloidosis. James Watson, the now controversial scientist who in 1953 co-discovered (along with Francis Crick) the structure of the DNA double helix, believes that CRISPR Cas-9 is the most important discovery in genomics since their original discovery all those years ago.

At Anchor, we have expanded our coverage of genomics from gene sequencing (e.g., companies like Illumina that read DNA/RNA) into other fields like synthetic biology (e.g., companies like Ginkgo Bioworks that also write genomes, but not for humans!) – all of which are beneficiaries of the dramatic reduction in the cost of genome sequencing. Illumina, the dominant sequencing company, has largely been responsible for this reduction in the cost of sequencing. The cost is now as low as $600. Once we reach $100, genome sequencing would surely be feasible for a large proportion of humanity. As Figure 3 below shows, this rate of change (in cost) is even faster than what we expect from Moore’s Law ala semiconductors.

We note that Intellia Therapeutics is one of the largest holdings in the Anchor BCI Global Technology Fund and we have recently also invested in Ginkgo Bioworks.

Emerging fintech has performed strongly in 9M21, particularly within a category of fintech known as buy now, pay later (BNPL). BNPL firms like Klarna and Afterpay provide a very convenient payment service when you buy inexpensive items like apparel or shoes. Via a mobile app, these companies allow you to buy on installment, over say 4 months. This unsecured credit has become enormously popular amongst young shoppers. There is currently a land grab underway amongst the BNPL players to gain as many consumers as possible – as Figure 4 below shows.

Corporate activity has driven the latest surge in share prices of these emerging fintech players. Either large fintech companies are buying the smaller ones (e.g., Square buying Afterpay – a BNPL firm) or very large companies are buying or partnering with these minnows (e.g. Goldman Sachs buying Green Sky, or Amazon partnering with Affirm – also a BNPL firm). Consolidation appears to be underway in fintech. 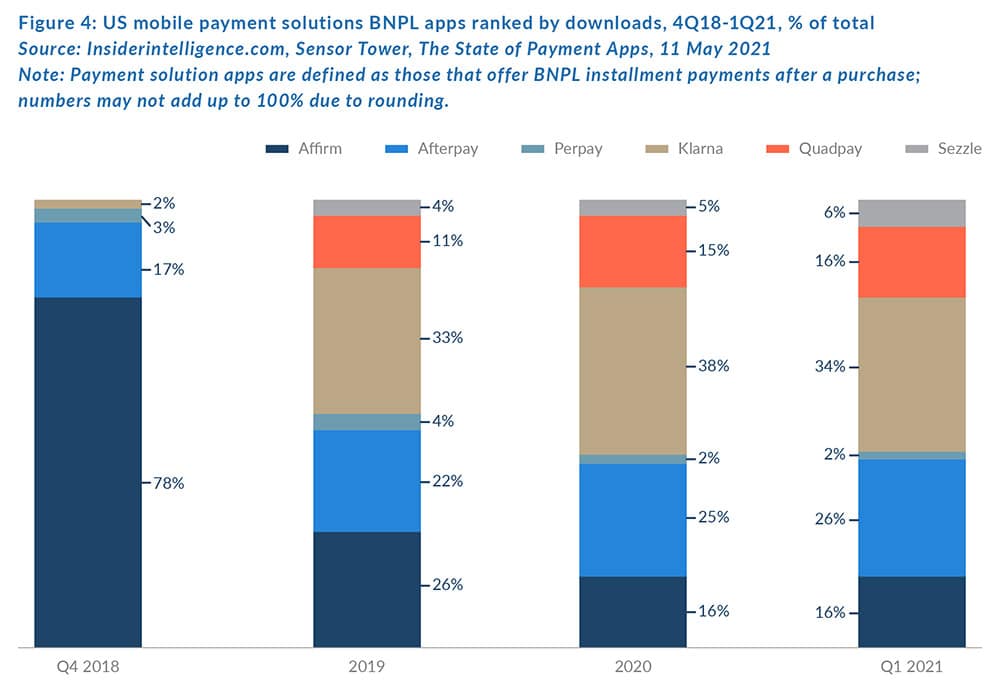 The laggards over 9M21 have been Chinese tech, video gaming, hydrogen fuel cells, and online real-estate. We also discussed the Chinese e-commerce segment in The Navigator – Anchor’s Strategy and Asset Allocation, 3Q21. Clearly, the pain has now spread from e-commerce to other Chinese internet categories like education.

The earnings outlook for the US tech sector looks promising, with continued earnings upgrades in 3Q21 (notably for Alphabet). The Nasdaq Composite is expected to grow earnings by a compound annual growth rate (CAGR) of 40% over the next 3 years. Chinese tech has seen consistent downgrades to earnings, although the reductions in 3Q21 are not as material as we saw in 1H21. The Hang Seng Tech Index is expecting earnings growth of only 8% over the next 3 years (CAGR). 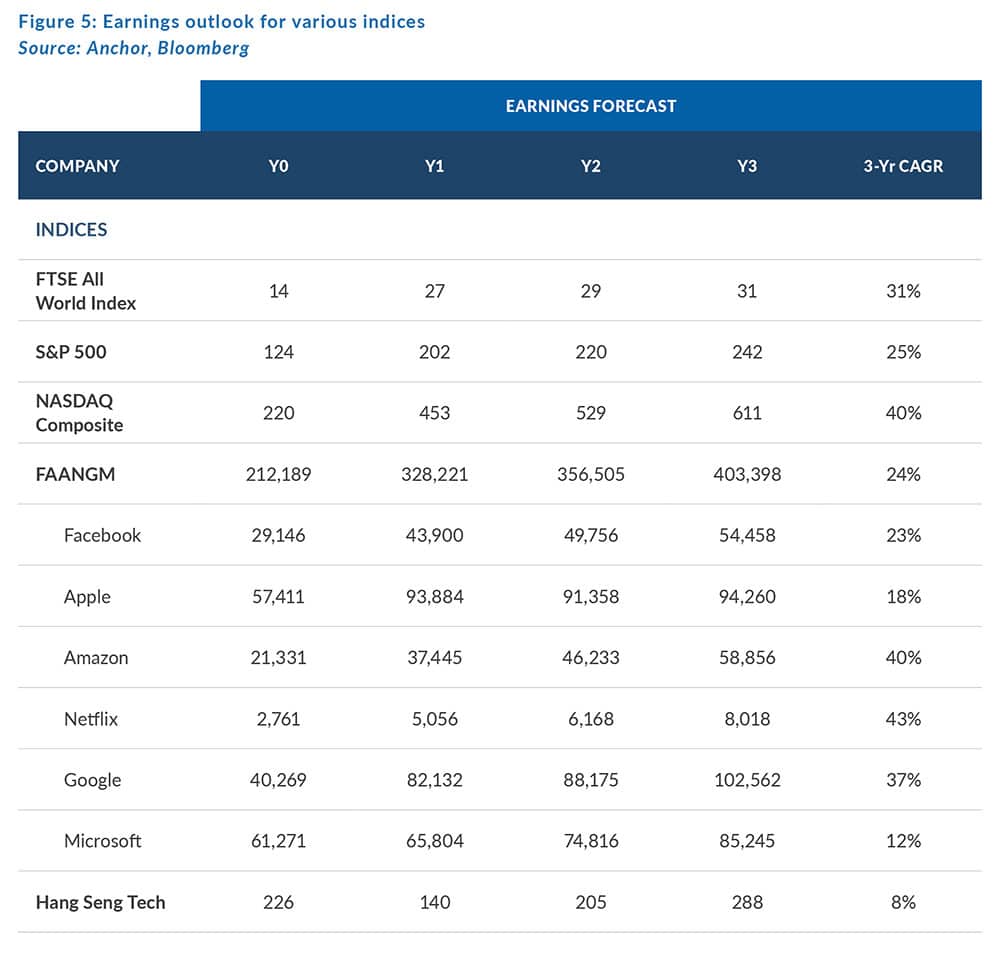 These forecasts can be compared with those of the FTSE All World Index and the S&P 500 Index of 31% and 25%, respectively, over the next 3 years (on a CAGR basis). These growth rates are both marginally up on the prior quarter (3Q21).

Sentiment is clearly still negative in Chinese tech, and in shares like Naspers, Lemonade, Teladoc, Stone, Zoom, Stitch Fix, MarketAxess, Beyond Meat and the gaming companies, while investors are generally bidding up for the cloud companies as well as ASML, Microsoft, Alphabet and DoorDash.

Some interesting investment opportunities have now emerged in the Chinese market. JD.com, the e-commerce giant, may be a net beneficiary of fairer competition between the tech giants. JD.com is allied with the Tencent stable of companies and competes with Alibaba. Tencent, probably the best of all the large tech firms in China, is also an interesting option. One of the long-terms risks for Tencent is that if the new rules restricting video gaming for children are successful, it will limit the supply of adult gamers in the future. The other would be if Tencent’s super app, WeChat, is somehow targeted by the authorities. Our assessment is that if Big Tech is to stay out of trouble in China, these companies should stop the obvious anti-competitive practices, focus on innovation, and expand offshore.

We are intrigued by the opportunities in the biotech industry arising from the vastly reduced cost of gene sequencing. Companies like Ginkgo Bioworks offer very interesting prospects for riskier early stage investing. And finally, Intel remains an attractive prospect if its CEO, Pat Gelsinger can deliver on his plans for accelerated chip development over the next four years.

As we stated last quarter, barring a prolonged period of high inflation (i.e., not transitory), we would expect the tech sector to perform well over the long term, relative to the broader stock market. This is purely a function of superior earnings prospects for the sector – partly driven by the digital transformation of the global economy. However, over the shorter term, we have a slightly different take. Our theme for tech investing in 2021 is ‘adjusting for risk’. And this is what we feel investors need to do while global liquidity remains high and market sentiment is strong – avoid taking undue risks.