Sasol reported results for the six months ended 31 December 2021 (1H22) on 21 February 2022. Operationally, this was a disappointing period for Sasol due to lower production volumes at its Secunda Operations due to “operational challenges.” However, this was offset by strong crude oil and chemical prices, coupled with increased demand. Earnings before interest and tax (EBIT) came in at R24.3bn (+12% YoY), while adjusted earnings before interest, tax, depreciation, and amortisation jumped 71% YoY to R31.8bn. Although net debt/EBITDA halved YoY to 1.3x, it was higher than we had expected, especially given that it was at 1.5x on 30 June 2021 and all earnings have been retained over the period. 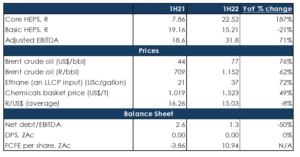 Cash generated from operating activities soared 73% YoY to R20.3bn, while capital expenditure came in at R10.4bn for the period under review vs R7.5bn in the prior corresponding period (this was due to a phased shutdown at its Secunda Operations in the prior period and increased sustenance capex in 1H22).

The company showed a significant improvement in its balance sheet with the finalisation of some of the asset sales and strong cash flow resulting in Sasol’s long-term debt declining by c. R36bn (short-term debt rose by c. half this amount).

The company again opted to hold onto its interim dividend (the last time it paid out an interim dividend was in 1H19) but it is guiding for the resumption of the dividend at this year’s June results (FY22). Consensus analyst estimates are expecting HEPS of R44 for FY22. Clearly, there is upside risk to that number given where oil and chemical prices are currently. We continue to believe the backdrop of higher prices outweighs the company-specific challenges (production volumes, climate change issues, etc.) that Sasol faces.

Figure 2: Sasol’s guidance for its balance sheet and dividend over time

Figure 3: A reconciliation of the difference between Sasol’s HEPS and core HEPS

As previously discussed in our note entitled Sasol 1H22 update: FCF to remain strong on the back of higher oil and chemical prices, dated 8 February 2022, Group capex should now sustainably be less than half of what it was just a few years ago. This, in addition to a lower net debt level, means that the risk profile of the business is different from what it was just a couple of years ago. These factors plus higher energy prices have the potential to drive a re-rating for the share, in our view.

Sasol is a cyclical business currently benefiting from the tailwinds of strong prices of its commodities. Simultaneously, much lower capex spending and a much-improved balance sheet mean that the risk profile of the business has improved materially over the past couple of years. Strong earnings growth and continued balance sheet improvement make the share attractive at current levels.