Will the tech rally continue?

It is a question that our clients ask us all the time. The tech rally has indisputably defined capital markets over the past decade, with all the COVID-19 drama in the last few months only serving to accelerate the economic paradigm shift where the new ways are replacing the old.

As we progressed into a global lockdown, everyone in the world was forced to become a digital native in a matter of weeks. We all have Luddite friends/co-workers who are suddenly highly proficient with Zoom, Teams, and cloud file sharing! It was an awkward transition that they had avoided for years, but 2020 would be the annum that would force them on a learning curve.

Investors now find themselves in the same dilemma! Often battle-scarred from the dotcom bubble of 2000, the IPO and subsequent rally of many tech firms over the past 10 years have left many believing that it is too late to rebalance their portfolios accordingly. This is an uncomfortable position of course, as it is squarely at odds with the way one is experiencing the change on a practical level in everyday life.

A portfolio skewed toward the broader tech space has outperformed by a notable margin. A good, practical example of this is the relative outperformance of the Nasdaq (a tech-heavy index) vs the S&P 500 since 2011. The cumulative result is staggering, with the Nasdaq having returned 267% vs the S&P 500’s 140% return over that period. 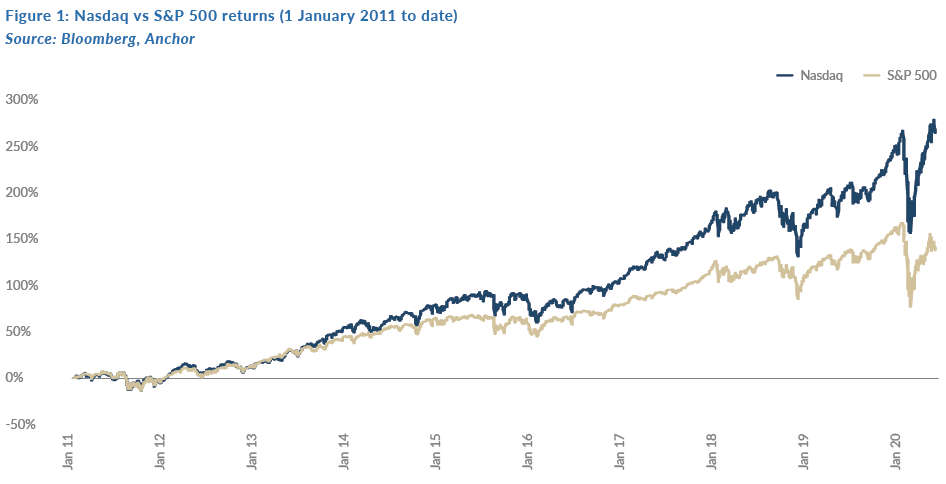 Another glaringly obvious example is the constitution of the five-largest companies by market capitalisation, and how this list has changed over the years.

At the turn of the millennium, the top spots were dominated by big oil and finance. Fast forward to today, and the top-5 spots are the exclusive realm of the tech juggernauts. Naturally, your portfolio’s relative performance would have been defined by your positioning into this theme. 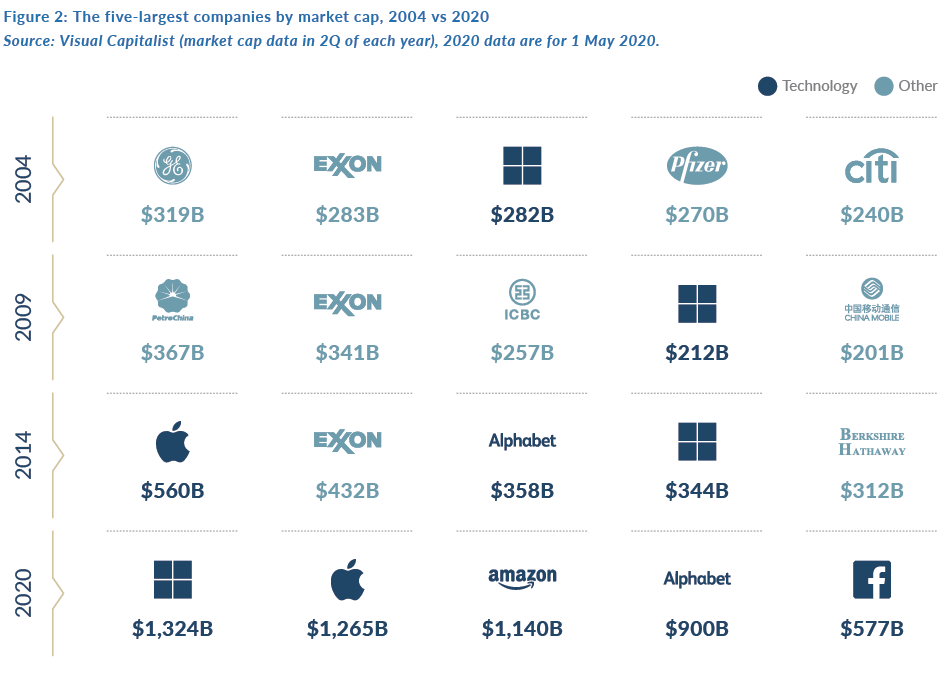 Importantly, this outperformance is attributable to factors that remain in force today – and will continue to drive the relative outperformance of the sector. Let us discuss some of the most significant ones.

One of the best leading indicators of growth, is investment. This makes intuitive sense. The companies that will benefit from the future, are those companies that are spending the money to create that future – and nobody is spending more than tech.

Far from the cash-burning cautionary tales of the dotcom bubble, the tech sector today is characterised by oligopolistic titans which generate billions of dollars in free cash flow. This has allowed these same firms to spend unprecedented sums on research and development (R&D).

Amazon currently spends around $37bn on R&D annually – more than the individual revenues of 425 of the companies in the S&P 500. The five-largest tech firms in the US, collectively, have spent around $1trn on R&D over the past decade. On an annualised basis, that is around one-third of SA GDP. 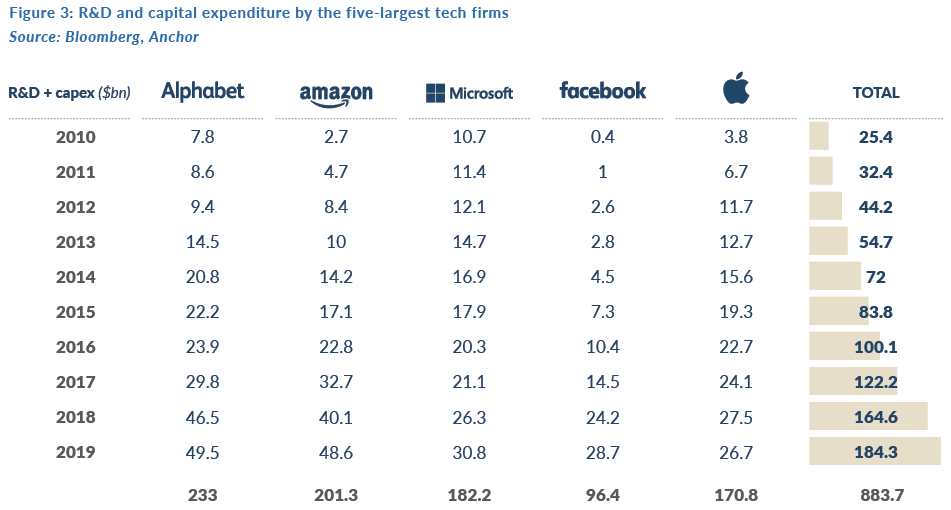 These five companies also earn an average return on invested capital (ROIC) of 20.5%. This means that for every $1 spent on R&D, USc20 in shareholder value is created every year. From an investor’s perspective, this high rate of reinvestment and the high return on investment are an extremely attractive combination – as this is ultimately the formula that will cause shares to compound in value over the years in a way that no other asset class can.

Given the tech sector’s capacity and propensity to reinvest at a high return, it stands to reason that this sector should continue to deliver market-beating returns over time.

Having said this, one cannot ignore absolute size. The five companies mentioned above constitute 20% of the S&P 500 today. How much bigger can they, and the rest of the sector, really get from here?

Facebook, Amazon, Spotify, PayPal, and Alibaba are a few high-profile examples of how these network effects play out.

Over time, this allows these platform businesses to earn more dollars per user – and to negotiate more profitable deals with their suppliers. 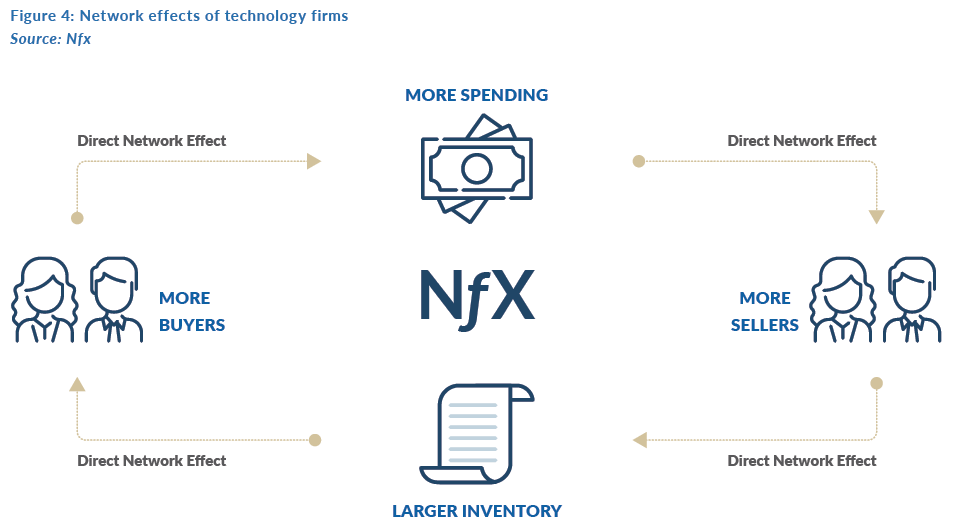 Financially speaking, this means that these large tech firms will likely earn a higher return on each incremental unit of capital they reinvest into growth. From an investor’s perspective, profit growth will likely accelerate as the firms becomes larger – and the value of the businesses will follow suit.

Take for example PayPal, a business that has been in existence since 1998. It took 17 years for the company to go public with an initial public offering (IPO) valued at $40bn, but just six years later this same firm now has a market capitalisation of $207bn. More astonishingly, around 50% of this value has been realised only in the past 12 months.

The point to make here is that the absolute size of the tech giants, and the tech sector itself, do not point to an approaching zenith. Instead, it points to a continuation of a secular trend that is now more powerful than ever.

The most important factor, beyond the investment theory, is the capacity to innovate. The tech sector, more so than any other, has an almost singular focus on innovation.

Alphabet spent around 15% of its $35bn in annual operating income on what it describes as moonshots – new ideas that stop at nothing short of changing the world.

Jeff Bezos’ infamous aphorism, “Your margin is my opportunity”, has come to define Amazon’s approach to capital allocation – where profitable segments of the business are used to fund the development of entirely new revenue opportunities (think Amazon Web Services [AWS], or Amazon Prime Video).

The resultant value creation for shareholders, while typically non-linear, can also be explosive. Amazon shareholders who remember when AWS’ revenue was first disclosed, or more recently Disney shareholders who can recall the company’s recent announcement of its Disney+ streaming service, will understand.

Looking to the future, the landscape is, in our view, as promising as it has ever been. There has never been more breadth of opportunity for investors in public equity markets to invest behind world-changing trends than now.

Facebook is set to put a major dent in global ecommerce with the launch of its partnership with Shopify. Predominantly an advertising platform until now, Facebook Shops leverages the human psyche by giving users the option to make purchases at the exact moment when their propensity to spend is the highest (i.e. when immersed in photos of their favourite activity or holiday).

Spotify is busy usurping the entire record label industry, which today still commands around USc60 of every dollar of revenue generated by music sales and streaming. This straightforward process of disintermediation could easily double the revenue of the business.

Chegg, an online tertiary education services platform, has over 3.5mn subscribers currently and aims to disrupt the overpriced, outdated US college system with a suite of affordable online courses that take six months to complete and payment only becomes due once their students are employed.

These are three examples of some of the companies we own that stand to create material value for shareholders through innovation over the coming years.

Make the allocation, and stay the course

As custodians of your wealth, it is necessarily our job to predict future investment trends. While it is notoriously difficult to identify the portions of the market that will outperform in the short term, the potential for the technology sector to continue delivering market-beating returns over the next decade is clear.

There is no one single formula for everyone, but our advice to you is to make an allocation to a tech strategy that is meaningful in the context of your overall equity exposure – and to stay the course. Tech shares, particularly the earlier stage businesses, can be volatile and often the value creation is only realised in later years – but the long-term impact on your portfolio’s performance will likely be material.

The Anchor BCI Global Technology Fund is worthy of your consideration. Managed by a dedicated investment team headed up by former Naspers corporate finance executive David Gibb, the fund has just completed its first full year to the end of June 2020 – having returned 49%, as compared to the S&P 500’s return at 26% and the MSCI World’s 21% return. If you would like to find out more about the fund, please contact your financial advisor or email [email protected].