WBHO returns to a profit with 1H21 results

Wilson Bayly Holmes-Ovcon Limited (WBHO) released 1H21 results (to 31 December 2020) on 3 March, moving back to profitability (a R44mn attributable profit vs a R508mn loss in FY20) for the period, on the back of solid results from its UK and Africa segments. However, its Australian Western Roads Upgrade (WRU) project’s losses continued to be a pain point in these results, as the construction Group had to account for further provisions amounting to AUD28mn. We note that the WRU project is now physically complete. The WBHO team is processing quality handover certification and commercial acceptance for the project, although the contractual date for achieving commercial acceptance is at risk and delays in handing over the project on time could result in penalties against WBHO. Management have indicated that the company has accounted for additional costs because of a further two-month extension of the project (due to the onerous process of receiving the certificate of completion for the WRU), but we think this could present further risks in the next six months (2H21). 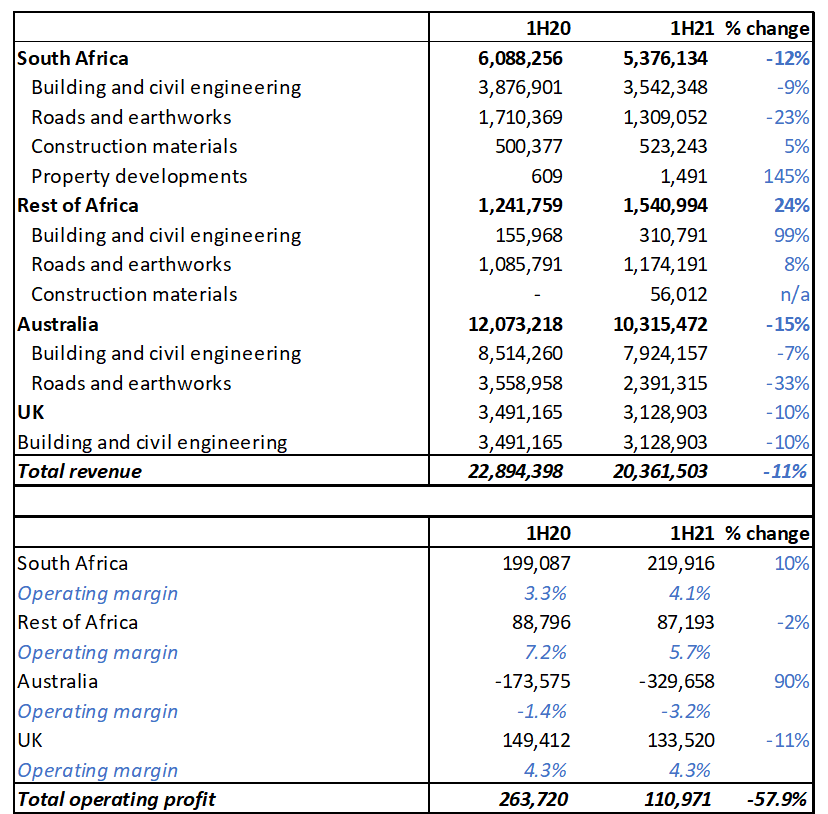 Although WBHO’s order book was flat from FY20 (30 June 2020) to 1H21, the African order book increased by 13% YoY, encompassing a 14% YoY increase in SA and an 11% YoY increase in the Rest of Africa segment. However, this was somewhat offset by a 23% YoY decline in the UK operations’ order book. During the earnings call, management emphasised that future work prospects in the UK were promising. Management also said that locally there was a “noticeable increase” in the availability of new projects from state-owned enterprise (SOEs) such as the South African National Roads Agency (SANRAL), Eskom, Transnet, etc., as well as in public-private partnership projects (PPPs).

Figure 2: WBHO order book and outlook by segment and geography, 1H21 to 2H21

*Note that the project pipeline consists of targeted projects expected to be adjudicated and awarded within 24 months.

Once WRU is out of the base, we expect a better operational performance from WBHO going forward. Overall, we think the worst from the WRU project is coming to an end and, although the order book was broadly flat in December vs June 2020, WBHO’s project pipeline is very promising and starting to gather good momentum locally and in the UK. We think the market is currently looking past WRU’s short-term risks and views the positive momentum in WBHO’s project pipeline in a favourable light. At current levels, we recommend holding the share.