Berkshire Hathaway (Berkshire) is the holding company for several businesses and is run by well-known investor, Warren Buffet, who is chairman and CEO. Buffet became the controlling shareholder of the firm in the mid-1960s and started a progressive strategy of diverting cash flows from the core business into other investments. By 1985, Buffett had liquidated the firm’s textile operations, and it transitioned into a holding company with a diverse portfolio of sectors – from technology to food. However, Berkshire’s principal operations are insurance business conducted across the US on a primary basis and worldwide on a reinsurance basis. Its core insurance subsidiaries include GEICO, National Indemnity, and reinsurance giant, General Re.

Berkshire’s other businesses include a railway company (Burlington Northern Santa Fe), a wholesale distributor of consumer goods (McLane), a clay bricks manufacturer (Acme Brick), a battery company (Duracell) and a specialty chemical company (Lubrizol). Through its insurance business, Berkshire also holds investment stakes in several US listed equities (See Figure 9 below) and it either fully owns or owns controlling interests in dozens of major companies – including Fruit of the Loom, Heinz, Dairy Queen etc. At 89 years of age, Buffet has yet to name a successor.

Berkshire has a market cap of c. $563bn (as at 17 January 2020) and, as at that date, it was the eighth-largest listed company in the world in terms of market cap. Berkshire is also one of the most expensive stocks investors can own – its Class A shares currently trade at over $344,000/share (it was trading at c $19 in 1965 when Buffet’s investment group acquired the company). There are also Berkshire Class B shares, which are significantly more affordable, closing at $230.20/share on Friday (17 January 2020). 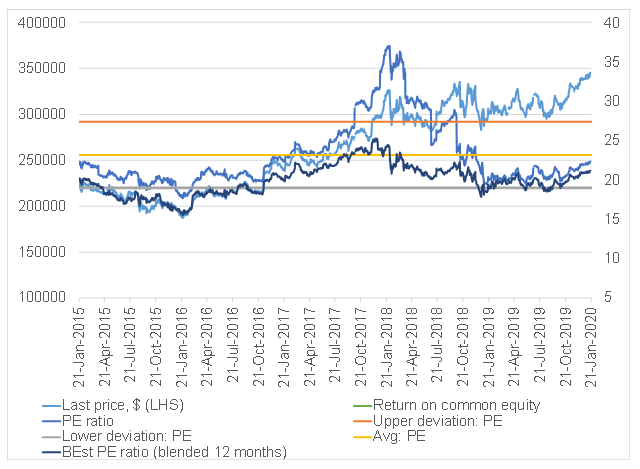 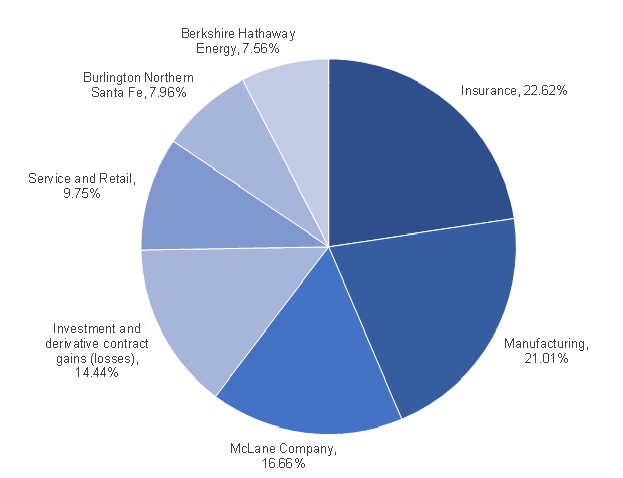 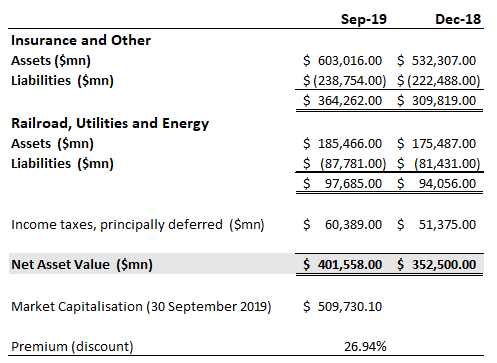 According to Investopedia, from 1965 to 2018, the annual performance of Berkshire’s share price was more than twice that of the S&P 500 Index. Berkshire’s stock generated an annualised 20.5% return over that period, while the S&P 500’s annualised return stood at 9.7%. However, in 2019 the share had one of its worst years relative to the S&P 500 Index and, according to Market Realist, Berkshire’s returns vs the S&P 500 were the worst in a decade. This despite its largest holding (in Apple) being an outperformer vs markets by a wide margin. 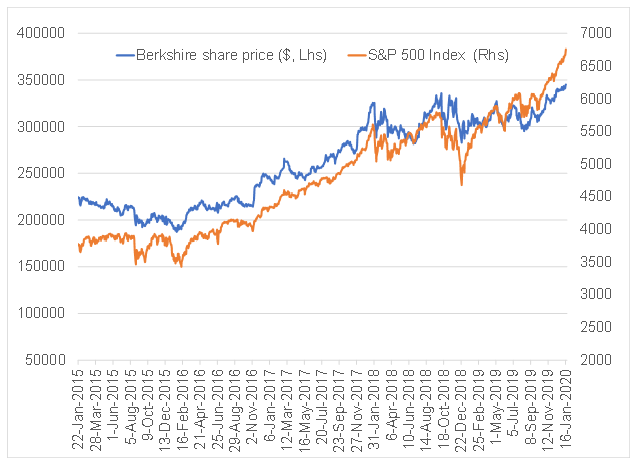 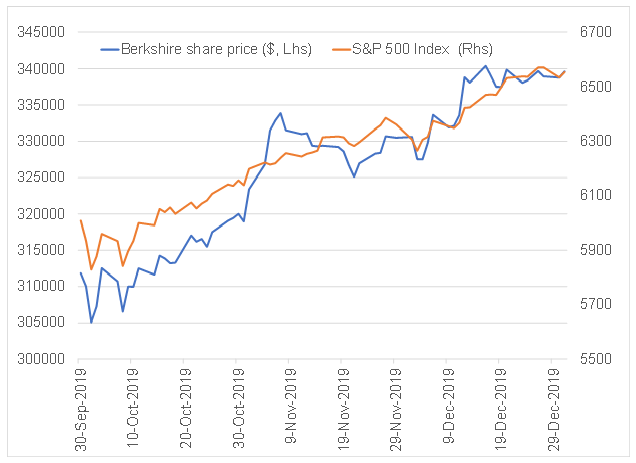 The float is the war chest which most articles refer to as being available to Buffett for acquisitions – the premiums earned but not yet paid as claim cover. Reviewing the Berkshire earnings release, it defines the major components of the float as unpaid losses and loss adjustment expenses, including liabilities under retroactive reinsurance contracts, life, annuity and health benefit liabilities, unearned premiums and other liabilities due to policyholders, less premium and reinsurance receivables, deferred charges assumed under retroactive reinsurance contracts and deferred policy acquisition costs.

Float was approximately $127bn as at 30 September 2019 and $123bn at 31 December 2018. The company’s average cost of float was negative in the first nine months of 2019 as its underwriting operations generated pre-tax earnings of $1.5bn, according to the Berkshire Hathaway 3Q19 earnings release.

Berkshire has made no large acquisitions since it acquired Precision Castparts in 2015. As Market Realist argues, the reason is likely because there were not many investment opportunities that passed Buffett’s investment tenets, with the publication noting that “stock market valuations are not looking cheap, especially for value investors. As for outright acquisition opportunities, given the abundant supply of cheap money, Buffett is facing competition from other hedge funds who can use leverage massively.”

Figure 7: Berkshire Insurance and Other assets are made up as follows 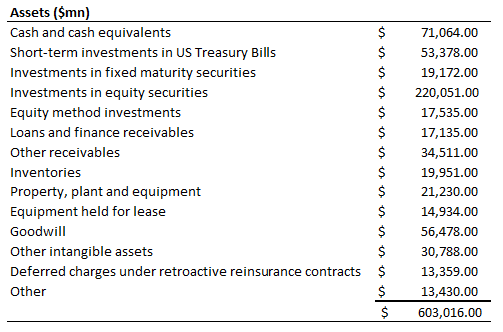 Looking at Berkshire’s 3Q19 earning release, we calculate the following: 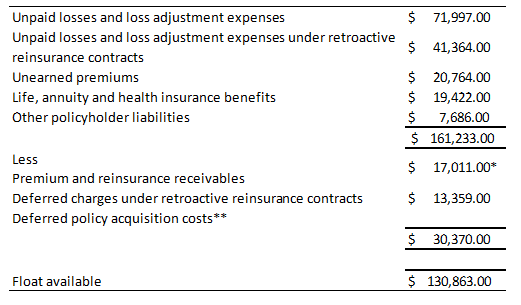 Berkshire made Barron’s 10 Stock Picks for 2020 list, which was published on 13 December 2019, with Barron’s describing the businesses within Berkshire, such as Geico and Burlington Northern Railroad, as being promising. While Barron’s notes that the company’s growing cash pile (c. 25% of its market value), has hurt its performance, its report cites “low valuations as positives, as well as its annual earnings stream of more than $25bn from its dozens of wholly-owned operating subsidiaries.” The report goes on to say that “Given Berkshire’s size, Buffett needs to think big with acquisitions,”. Possible targets which Barrons suggest are Walgreens Boots Alliance Inc., Delta Air Lines, Southwest Airlines, FedEx Corp. and United Parcel Service. 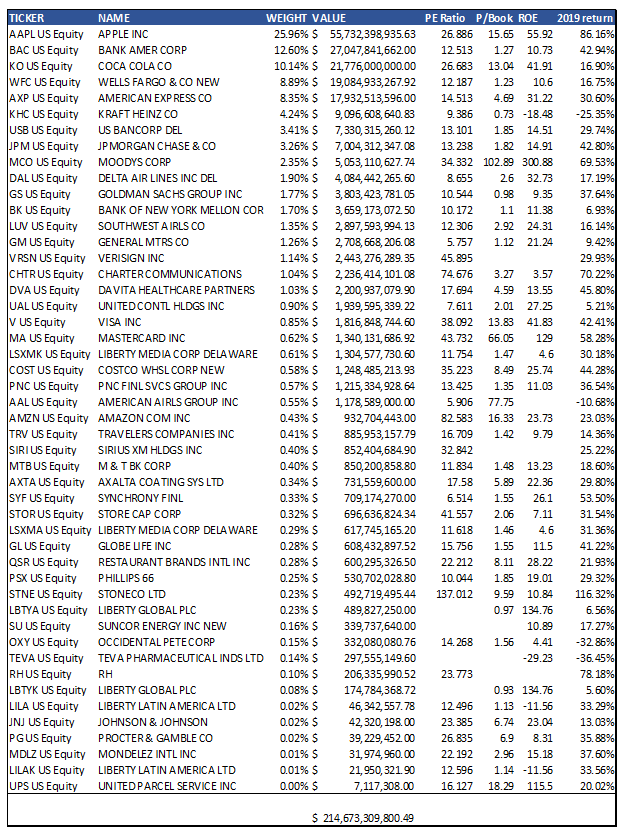