US Supreme Court Justice Ruth Bader Ginsburg, affectionately known as RBG, died on Friday (18 September). Ginsburg was only the second woman to serve on the US Supreme Court and had a reputation as a champion for gender equality and a fiery voice for civil liberties and women’s rights. She was proposed to the position by then-president Bill Clinton in 1993 and among the current crop of US Supreme Court justices, her 27 years of service is second only to Clarence Thomas who has been serving for 29 years.

Ginsburg’s passing shortly before the US presidential election (scheduled for 3 November), creates an opportunity for the Republicans (who currently have the presidency and control the Senate) to replace her with a conservative justice as a means to negate Chief Justice John Roberts’ attempts at a more politically neutral Supreme Court.

Soon after news of her death broke, Senate Majority Leader Mitch McConnell already vowed to hold a vote on US President Donald Trump’s nominee (still to be named) to fill the vacancy. This has raised the ire of Democrats as it was in direct contrast to McConnell’s position during the 2016 election cycle, when he refused to hold hearings and blocked ex-president Barack Obama from appointing Merrick Garland.

Attempts by Trump and Republicans to force through a Supreme Court justice appointment before the election is likely to increase already heightened political animosity into this year’s US presidential elections but does not have any obvious implications for markets.

There are 9 Supreme Court justices who are appointed for life. Their appointment is proposed by the sitting president and must be approved by the Senate.

The US Supreme Court has no power to create or change legislation (that is reserved for Congress), but it does play a critical role in deciding how legislation is interpreted. The Supreme Court is often called upon to create legal precedent on politically sensitive topics such as abortion, LGBT rights, religious freedom, and immigration. Thus, control of the presidency and the Senate can be critical in nudging the influence in the Supreme Court in favour of the respective party policies on these topics (subject to Supreme Court justice vacancies opening).

Prior to Ginsburg’s passing, the Supreme Court was already slightly skewed in favour of Republican appointees (5:4 – see Figure 1)

Despite the balance of power in the Supreme Court favouring Republicans, Chief Justice John Roberts has based his leadership of the Supreme Court on removing the perception of political bias. He recently sided with Democratic appointees in rulings on abortion, LGBT protection, and DACA (the controversial Dream Act [which stands for Development, Relief and Education for Alien Minors Act] introduced by Obama to shield the children of illegal immigrants from deportation): 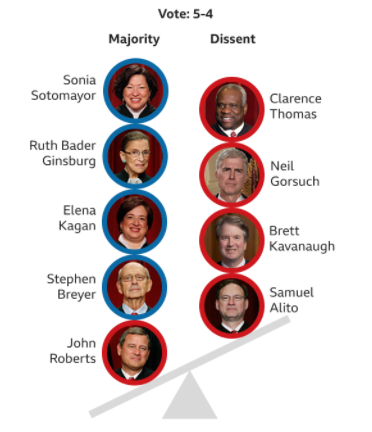 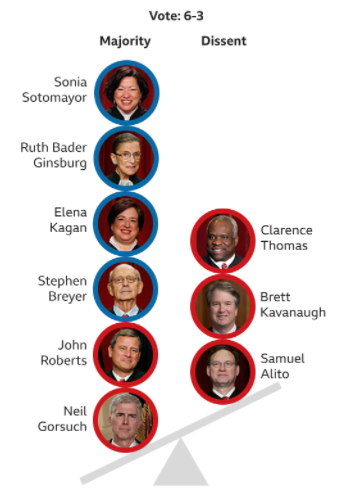 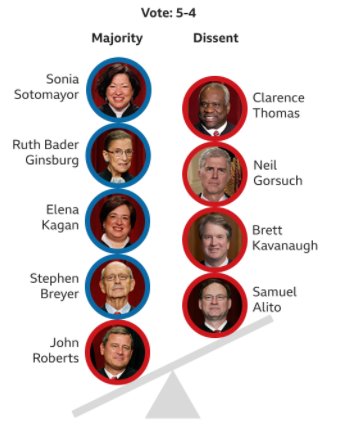