In September, the US and China announced a resumption of trade talks scheduled for early October and the US also released better-than-expected payroll and consumer data, which all helped ease fears of an imminent recession, reversing a trend which had seen US 10-year government bond yields drop to 1.5%. Plunging yields and muted economic growth expectations had helped drive a rally in stocks with high earnings growth (the Russell 1000 Growth Index outperformed the Russell 1000 Value Index by 9.5% YTD [through 31 August]) but, as recession fears eased and yields rose, the trend in the outperformance of growth shares reversed, with the Russell 1000 Growth Index giving back 3.6% of its YTD outperformance in September.

The rotation from growth to value also happened at a geographic level as recently underperforming stock markets such as Europe (+4.3% MoM) and Japan (+5.7% MoM) comfortably outperformed the US (+1.9% MoM) during September. Emerging markets (EMs; +1.9% MoM) again lagged developed markets (+2.1% MoM) last month, despite a strong performance from Indian stock markets, where a surprise cut in the corporate tax rate (from 30% to 22%) helped drive the country’s NIFTY 50 Index 4.1% higher MoM. EMs were held back by the performance of some US-listed Chinese shares, which fell following tweets from US President Donald Trump in which he suggested that he might restrict access to US capital markets for Chinese firms.

Global central banks continued to support markets, with the US Federal Reserve (Fed) delivering a much anticipated 0.25% cut to interest rates in September (its second consecutive cut). The European Central Bank also cut rates during the month, taking them further into negative territory and surprising the market with a pledge to restart quantitative easing with EUR20bn of monthly bond purchases from November. As central banks worked to calm markets, geopolitical noise continued to counteract that, with Trump now facing threats of an impeachment over revelations that he pressured his Ukrainian counterpart to investigate political rival, Joe Biden. The UK’s separation from Europe remains clouded in uncertainty with Prime Minister Boris Johnson suffering defeat in a court battle questioning the legality of his suspension of Parliament. Also, during the month, a drone attack on Saudi oilfields took 5% of the global oil supply out of commission resulting in a $12/barrel spike in Brent crude oil prices – the biggest single-day move since trading began in those contracts in 1998. However, the spike was short-lived as it became clear that the supply disruption could be dealt with fairly easily and the price of Brent crude ended the month largely unchanged.

Below we highlight the Anchor Tech Unit and our view of music-streaming service, Spotify.

Technology is changing the way we invest

The past decade has born witness to a dramatic shift in the way businesses interact with consumers, with technological innovation upending entire industries and value chains at a pace that was previously unthinkable. This phenomenon, which has now become commonly known as the Fourth Industrial Revolution, has profound ramifications for most aspects of our lives – not least of which is how we invest.

There are numerous examples of large, established corporations that have generated billions of dollars in earnings over several generations which have suddenly found themselves facing an existential crisis after failing to adapt. Conversely, small startups with disruptive models have demonstrated the ability to scale globally in just a few years. The consequences for the shareholders in each example are obvious – with fortunes being made and lost.

Naturally, an investor must embrace this new reality to both avoid exposure to redundancy and benefit from the outsized returns that will earned by the trailblazers. It is in this context that we have established the Anchor Technology Unit – a team of investment professionals dedicated to allocating capital in this high-growth space.

It will require a specialised approach

After the successful $1.3bn IPO of Apple Computers in 1980, the US West Coast’s Silicon Valley has become home to the highest concentration of venture capital firms in the world. The tech hub saw over $130.9bn invested across 8,948 deals in 2018 alone. Fundraising activities over the same period saw a further $55.5bn raised across 256 funds, suggesting this momentum will continue into 2019/2020.

The significance of this for us is two-pronged:

First, we expect the rate of innovation (and disruption) emanating from this region to accelerate over the coming years. More so than ever, investors need to follow the developments here closely. Potentially transformational startups that successfully raise early-stage capital will serve as a leading indicator for future high-growth market opportunities. Conversely, they will simultaneously play the role of the proverbial “canary in the coal mine” – helping us to recognise mature segments that lie vulnerable to disintermediation or displacement.

Second, a record rate of venture capital investment will drive an equally significant rate of exits. 2018 saw a 33% YoY rise in realisations to $120bn, with the major public equity exchanges on the US East Coast serving as the primary platform. As these earlier stage businesses swap forward-thinking venture capital investors for more traditional, near-sighted institutional shareholders – the focus on longer-term prospects is often lost, while quarterly earnings announcements take centre stage. It is amidst this phenomenon, and the resultant mispricing, that we will find opportunity.

The Anchor Tech Unit will be led by David Gibb, who has spent over 2 decades allocating capital within the tech sector. David first started analysing the tech sector in 1998, and went on to co-launch and run the Stanlib Global Science and Technology Fund for several years. This was a particularly interesting period for technology investors as the dotcom bubble of the early 2000s formed and burst, with valuable lessons to be learned around the valuation of earlier-stage businesses. During the global financial crisis of 2008, David worked for Naspers as its global internet and media analyst – helping the company with its acquisition strategy offshore.

David continued to focus on the tech sector since joining Anchor, and has relished the opportunity to lead the Anchor global Technology Unit, which is a continuation of the work originally done at Stanlib and later at Naspers.

Seleho’s natural investment idea hunting ground is Reddit, itself an online media disruptor that has created a unique news aggregation and discussion forum across thousands of subjects. Having started his career as a commodities analyst, Seleho has developed an analytical ability that is well-grounded in traditional investment fundamentals – and has since demonstrated a knack for recognising earlier-stage trends that guide our idea generation process. Seleho’s encyclopaedic knowledge of the high-conviction positions taken by high-profile global hedge fund managers is something to behold and gives the team a useful perspective on areas of the market that have gone hot or cold.

If Seleho is the Reddit guy, Henry is definitely the Twitter guy. “Fintwit” has become the go-to virtual meeting place for tech sector participants from all walks of life – from developers and entrepreneurs to venture capital investors and fund managers. Henry’s enthusiasm for researching the significance of technology-driven disruption for capital allocators has made him a natural fit for the Anchor Tech Unit team, with his 5 years as an equity analyst at Anchor serving as a useful skill base.

One of our favourites: Spotify

One of the most profound impacts of the communication technology we’ve seen come to market over the past two decades has been the disintermediation of the distributor or middleman. Businesses can now reach consumers directly, and instantaneously – with physical distance no longer a challenge and physical presence no longer a prerequisite. A noteworthy example of an industry that has been turned on its head by this direct-to-consumer revolution is the music industry.

The almighty and notorious record label is fast losing relevance in a new world where artists can release a new album directly to a global audience at the push of a button, and the economic ramifications for the business model are equally as transformational. Over 61% of music industry revenues are currently earned by record labels, with only c. 22% going back to the artists and 17% to streaming services such as Spotify. Naturally, a record label’s 61% share of wallet represents a huge opportunity AND incentive for both Spotify and for artists – who could EACH grow their own share of wallet 150% by simply going directly to the consumer. 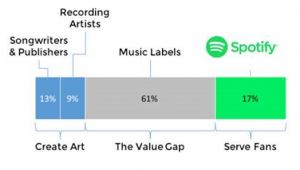 Spotify CEO Daniel Ek, a former guitarist in his own right, has shown the vision, determination and skill to build the largest music-streaming business in the world. Spotify has creatively used the ad-sponsored free model to initially attract customers (currently 217mn monthly active users) and to gradually convert these users to loyal, paying customers – with some 108mn at last count. With over 1.3bn payment-enabled smartphones across the globe, there is still a long runway for growth.

In addition, the business also has ambitions beyond music, with Spotify now also having established itself as a leader in the fast-growing market of podcasts. Spotify’s recently concluded deal with Barack and Michelle Obama to produce podcasts is a good example of how the company can continue to create new content to attract subscribers.

As is typical for relatively young technology companies, the initial objective is to grow its subscriber base and attain market dominance. The profits come later. This is how the technology industry works. So, as you would expect, Spotify is currently only breaking even.

The share price, however, is suggesting that the company will only achieve a 6% operating profit margin over the long term. Considering how the market may evolve, and the strength and vision of the team at the company, we think Spotify will do better than 6%. In other words, we believe the current share price undervalues the future prospects of the business.