Sasol reported good results for the six months ended 31 December 2020 (1H21) on 22 February. Looking at a “clean” number, such as core headline earnings per share (HEPS) or adjusted EBITDA, which considers Sasol’s black empowerment transaction and losses from the ramp-up phase of its US Lake Charles Chemicals Project (LCCP) Base Chemicals business, earnings were down for the period (by 15% and 6% YoY, respectively). However, diluted HEPS rose to R23.41 vs to R6.56 recorded in the prior period, with the big divergence between diluted HEPS and core HEPS being due to the following:

For us, the major announcement coming out of these results was no doubt Sasol’s decision regarding its balance sheet – the company has decided not to pursue a R30bn rights issue stating that it has raised enough capital via asset disposals (up to $3.8bn of announced transactions) and through cuts in its operating costs, capex, and working capital (c. $1bn). A recovery in oil and chemical prices has also alleviated pressure on Sasol’s earnings and the balance sheet. Net debt/EBITDA is now 2.6x and Sasol says that it intends to get that ratio to below 2.0x over time.

Sasol’s LCCP is now 100% complete, fully operational and ramping up. In 2020, the chemicals Group, Lyondell Basell Industries acquired a 50% stake in the LCCP business for $2bn and agreed to operate the new joint venture. Sasol is guiding that it has reached a cash flow inflection point as there is no more LCCP capex. FY21 capex (R19bn) is nearly half of FY20 capex (R35bn) and c. one-third of FY19 capex (R56bn). LCCP’s capex is now done and Sasol’s annual (FY21) capex will be less than half of what it was at the FY19 level. 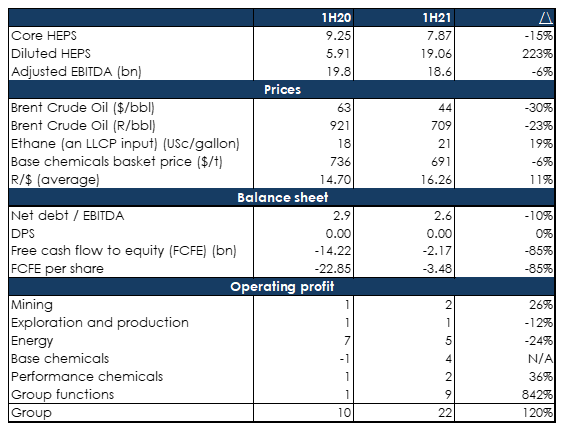 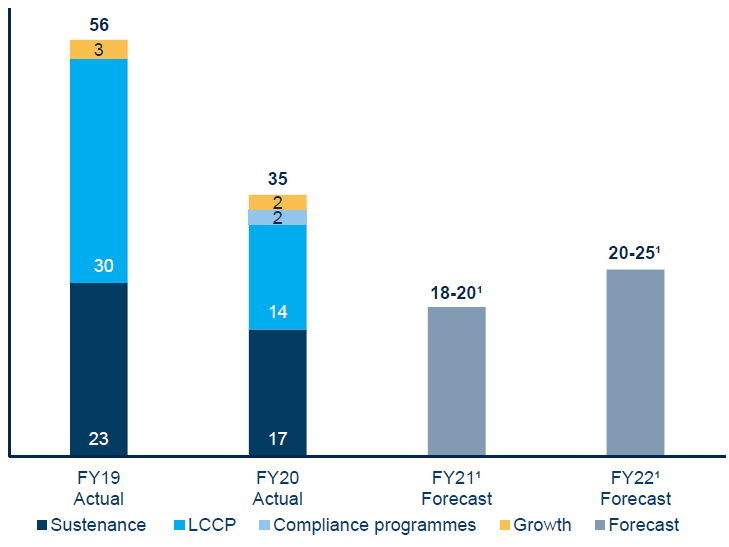 1) Translation (gains)/losses arising on the translation of monetary assets ad liabilities into functional currency. 2) Consists of realised and unrealised net gains on all derivatives and hedging activities. 3) Sasol Khanyisa equity-settled share-based payment charges recorded in the employee related expenditure line in the income statement. 4) Losses of R2bn attributable to the LCCP, while still in ramp-up phase, impacted by hurricanes Laura and Delta.

Source: Sasol. 1) Includes a loss on the disposal of R1.1bn and a corresponding gain on reclassification of foreign currency translation reserve of R3.1bn relating to the sale of a portion of Sasol’s US LCCP Base Chemicals business as well as a profit on the disposal of R719mn and a corresponding gain on reclassification of the foreign currency translation reserve of R246mn relating to the sale of Sasol’s 50% equity interest in the Gemini HDPE LLC. 2)Share-based payments includes both cash-settled and equity settled share-based payment charges.3) Consists of unrealised net gains on all derivatives and hedging. 4) Unrealised translation losses arising on the translation of monetary assets and liabilities into functional currency.

We estimate Sasol’s run-rate earnings at spot on 23 February 2021 are R30-R35/share. The share has re-rated sharply as pressure on the balance sheet subsides. Applying an 8x multiple to that number can justify a share price in the R240-R280 range (c. 30% upside from the current share price, at the midpoint). As a short-term trade, one could buy Sasol with that in mind. For longer-term investors, we remain cognisant of potentially more attractive opportunities on offer in other parts of the resources sector.