On Monday (28 October), Sasol released FY19 results and the outcome of the independent review into the cost and time overruns of its Lake Charles Chemicals Project (LCCP) in the US.

There was no further bad news related to LCCP, the independent review or the previous years’ financials. This, in addition to Sasol’s joint CEOs Bongani Nqwababa and Stephen Cornell stepping down due to cost overruns at the LCCP, has been well received by the market and Sasol’s share price surged 12.6% from Friday’s (25 October’s) close.

We note that the company’s balance sheet is still in a delicate state, but not to the degree that we had previously feared. If spot prices hold over the next year or so, Sasol’s balance sheet should be fine. However, at a 2.6x net debt/EBITDA vs a 3.0x covenant, rand strength or a downturn in oil or chemicals market prices still pose a threat. The dividend has been cut, but the market has already priced that in.

Looking forward, FY20 earnings are currently tracking lower than for FY19. The FY20 YTD average for the rand oil and polyethylene (the biggest part of LCCP and a major part of Sasol’s base chemicals basket) prices are 7% and 4% lower, respectively, vs the FY19 average. So, as it stands, we believe that there is not major upside to FY19’s R38 core HEPS number in FY20. At c. 8x FY20 core HEPS, the share is cheap vs history (9.6x). However, there is also the counterargument of increased attention to environmental, social and governance (ESG) matters and poor capital allocation justifying a lower rating going forward. Capex will just about halve over the next two years, which will reduce pressure on the balance sheet.

We estimate meaningful (c. 30%) upside if the share re-rates to its historical forward P/E of 9.6x and more moderate upside (of c. 11%) if the share settles at an 8.0x forward multiple. In our view, the share is currently cheap, although risks remain over the balance sheet in the short term.

Ethane is a major input for LCCP.

The balance sheet looks fine at spot, but the dividend has been cut and $400mn is to be raised via asset sales

The big concern for us has been the balance sheet. While net debt/adjusted EBITDA is high at 2.6x, it remains below the 3.0x covenant. Sasol is guiding for a range of 2.2x–2.4x going forward and, while there are levers within Sasol’s control, we think that, in large part, it will come down to what commodity prices and exchange rates do.

$400mn to be raised via asset sales

The portfolio review, first announced in 2017, has been completed and Sasol outlined a target of $2bn in proceeds from asset sales. Sasol believes it will achieve about 20% ($400mn or R5.8bn) of that $2bn target.

We have passed the peak capex years

Sasol has spent capital aggressively at the LCCP over the last couple of years. Over the next two years, capex should nearly halve from R56bn in FY19 to R30bn in FY21. 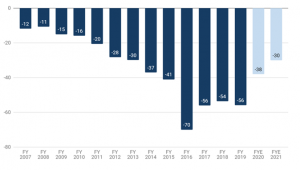 This reduction in capex will ease the cash burn of the last few years. 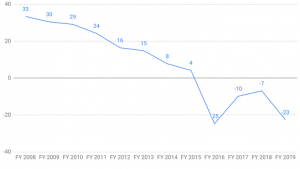 This will, in turn, ease the pressure on the balance sheet.

The independent review into the LCCP overruns are done

The big takeaways from the review are:

Why the big difference between HEPS and core HEPS?

At what do we value Sasol?

Figure 6 below uses a R35 estimate for FY20 HEPS from the existing business (i.e. ex-LCCP). Sasol’s forward P/E has averaged 9.6x over the past 10 years (see Figure 7 below). If that multiple is applied to the existing business (the third column in Figure 6), then we can value the business at R389/share (c. 30% upside from Monday’s close). 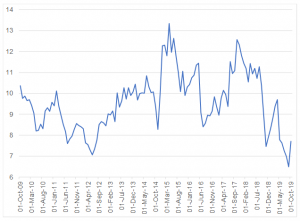 Some may feel that a lower multiple is justified going forward, due to ESG concerns, poor capital allocation and perhaps a weak macro outlook. However, applying an 8.0x fwd PE to the existing business translates to R325/share (11% upside from Monday’s closing price).

We note that the answer regarding the lower multiple is probably somewhere between the historical 9.6x and a lower multiple such as, for example, 8.0x (an average of the two suggests 20.5% upside).

And discounting it back to today at 10%. 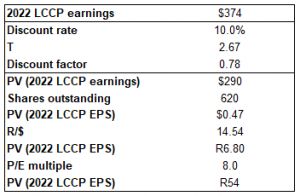 The R5.82/share LCCP FY22 EPS applies a 25% cut to Sasol’s guidance ($750mn instead of the guided $1bn). If Sasol achieves its FY22 EBITDA guidance, investors can justify a R79/share valuation for LCCP. 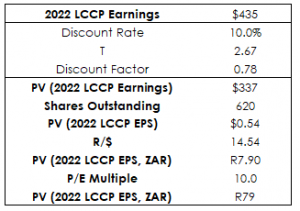