Following Sasol’s share price tumble over the last week, in which it lost c. two-thirds of its value, the company announced a new plan on Tuesday (17 March) to raise $6bn (c. R100bn) by the end of 2021. The Sasol share price recorded major losses on the back of a plummeting Brent Crude oil price (down c. 28% last week) and a worsening of the novel coronavirus (COVID-19). In addition to pressuring Sasol’s earnings, the low oil price places significant pressure on the company’s already strained balance sheet. Sasol has built up a large debt burden due to a combination of weak oil and chemicals prices and heavy capital spending at its Lake Charles Chemicals Project (LCCP). Sasol’s loan conditions require that its debt-to-profit levels remain above a certain level and the lower oil price, saw concerns mount that it will be in breach of debt covenants. This would mean that Sasol’s loans could become payable immediately.

However, on Tuesday, Sasol confirmed that it will be able to comply with these debt covenants – as long as the rand oil price remains consistent at c. R580/bbl. On an investor conference call yesterday afternoon, Sasol CEO Fleetwood Grobler and Financial Director (FD) Paul Victor outlined more details around a package of measures, aimed at addressing its balance sheet and ensuring its profitability in the current challenging operating environment.

Sasol views a rights issue as a last-resort option and, instead, it is aiming to generate $6bn from cost savings and asset disposals. If those two avenues don’t generate $6bn, a rights issue will be pursued. The scale of the asset disposal programme has been increased from $2bn to “significantly higher” than that (implicitly targeting closer to $4bn). Selling half of the US Base Chemicals business (LCCP) has now been put on the table. The roll-out of this plan is encouraging but, in our view, Sasol’s ability to successfully dispose of assets at reasonable valuations seems limited in the current environment. The range of possible outcomes is wide (see Figure 1 below) and, while it is definitely possible to construct scenarios with meaningful upside, there is significant uncertainty and risk in getting there. 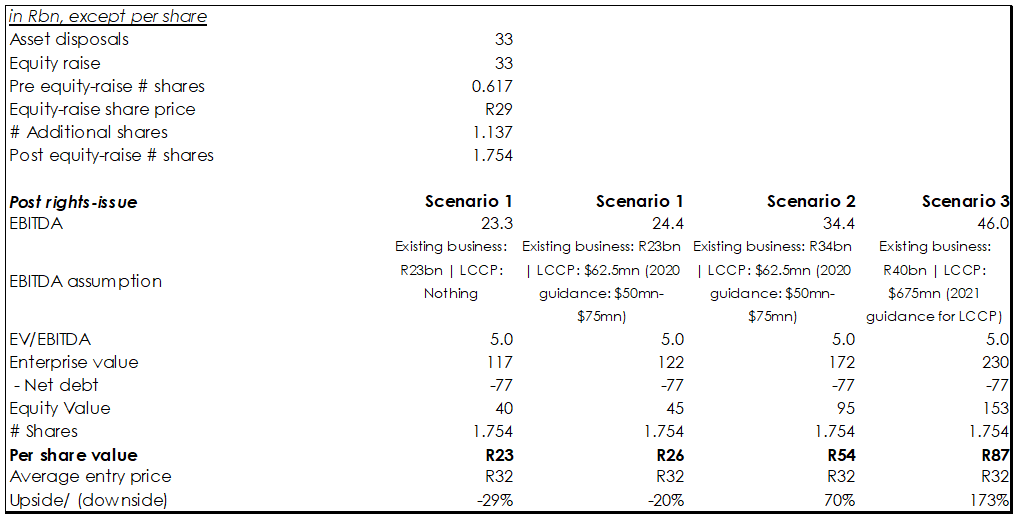 Sasol must act quickly and categorically given the current oil price (c. $30.45/bbl). The company is thus targeting $6bn by the end of FY21 (Sasol has a June year-end). Sasol’s current debt level is at around $10bn and it is looking to reduce that amount by $6bn (down to $4bn) by the end of FY21. The firm is viewing the rights issue as a last resort, with the intention being to get over the line with cost savings and asset disposals first.

What is Sasol’s plan to reduce debt by $6bn?

Sasol plans $2bn in cost savings, $2bn-$4bn in asset disposals (the explicit statement is, “significantly greater than the previous $2bn target”), and a possible $0-$2bn rights issue, depending on its achievement of cost savings and asset disposals. The company will need to decide on the rights issue around July 2020, at time of its annual general meeting.

Sasol is also in discussions with banks to lift its debt covenants. This is a 4- to 5-week process, which is currently underway. The company said it will disclose the results of these discussions in May. We note that this is the third time that Sasol is asking for leniency from the banks. At spot prices, Sasol will not breach covenants to June 2020, but it sounds like the company will breach 3.0x the December 2020 covenant at spot. Sasol’s FD, Paul Victor stated that there are asset disposals on the table currently that should allow covenants to be maintained by December.

In terms of Sasol’s $2bn cost savings, it is stopping all spending on non-essential projects – there will be no IT system upgrades, a total headcount freeze globally (job cuts are, however, not on the table at present), and it will also not be paying certain short-term incentive (STI) schemes for certain roles in the organisation. The firm is targeting a $1bn saving by June 2020, but we note that this is a high line of sight on FY20, given that only a couple of months remain before Sasol’s year-end. It expects a further $1bn saving by June 2021. More work needs to be done on this but most of the cost savings will come from the Secunda Synfuels value chain. Secunda Synfuels’ cash breakeven is currently with oil at $35/bbl (or at R520/bbl and a R14.65/$1exchange rate). It is unclear where the cut in capex will come from given that growth capex was already expected to essentially be non-existent. The risk of cutting “into the bone” of maintenance capex remains. Sasol’s working capital to turnover stood at 14% at the half-year and the company is aiming to lower that going forward, particularly as input costs should be lower in the current environment. On the call, Sasol mentioned its interaction with government on the delay of certain environmental projects (this process has already started).

As per the conference call, Sasol is targeting over $2bn in asset disposals by the end of FY21. Its US base chemicals asset disposals comprise ethylene crackers, polyethylene plants etc. Sasol is also looking to form a JV with a partner for up to 50% of the capacity of these assets. When pushed on the call on its ability to actually achieve asset disposals as a distressed seller, Sasol’s response was that it has the liquidity to not need to sell these assets tomorrow and it can get somewhere approaching fair value.

If cost savings and the asset disposals achieved are stronger, the rights issue amount is likely to be lower. The fastest that a rights issue can happen is during the August-September 2020 period and Sasol said that it is not looking to bring this forward due to current market volatility.

What requirements do the banks have in order to underwrite a potential rights issue?

Sasol will have to make progress on its asset sales for banks to underwrite a rights issue. Banks have had sight on the progress made up to now. Moody’s downgraded Sasol’s credit rating earlier this month and banks will allow one further downgrade from Moody’s and a two-notches downgrade from S&P. Nevertheless, banks want to see further progress on the LCCP ramp-up and also the continued execution on volume performance.

Sasol is still exposed in terms of oil prices, having previously only used put options. It is now considering forwards and zero-cost collars. The company said it was in the market for oil hedges prior to the collapse in the oil price, but the risk in the market was just too high and Sasol wasn’t able to fill the positions it had. It is now reverting more to a put-option structure to avoid giving up potential upside and is targeting 80% of Synfuels production to be hedged (c. 6mn barrels per quarter) at $30/bbl ($33/bbl at a $3 premium). 3mn of 24mn barrels have been hedged at $31/bbl and it has also increased its cover ratio on the rand vs US dollar exchange rate from 70% to 90%. Sasol is also less exposed to a rand below or close to R15/$1.