Proposed US listing restrictions on Chinese companies: What we know so far

On 20 May, the US Senate passed a bill that could block Chinese (and other foreign) companies from selling shares on the various US stock exchanges. This comes amid rising tensions between the two superpowers over the COVID-19 pandemic (close to 100,000 people have died in the US), technology, trade, and the Luckin Coffee accounting scandal. Below, we highlight what we know so far about this move and its impact on Iisted Chinese companies.

Republicans (and President Donald Trump in particular) have ratcheted up anti-China rhetoric as part of a campaign to shift the focus from the slow response to the COVID-19 pandemic and the dire state of the US economy going into the November presidential election. However, we note that this bill was passed by unanimous consent in the Senate (i.e. supported by both Republicans and Democrats). The bill will now also need to pass the Democratic-controlled House of Representatives before reaching the president’s desk to be signed into law. Given the strong bipartisan support, this is unlikely to be a major hurdle.

The aim of the bill is to compel foreign companies to allow US regulators access to their books, to ensure their accounting practices are honest, and of the same standard that US companies have to meet to be listed on stock exchanges in the country. The legislation stems from red flags raised by US lawmakers over the billions of dollars flowing into some of China’s largest corporations, much of it from US pension funds and college endowments. Alarm has also grown that US money is bankrolling efforts by China’s technology giants to develop leading positions in everything from artificial intelligence and autonomous driving to internet data collection.

The bill requires companies to certify that they are not under the control of a foreign government. If a company can’t show that it is not under such control, or the Public Company Accounting Oversight Board (PCAOB) isn’t able to audit the company for three consecutive years to determine that it is not under such control, that company’s securities will be banned from the various US exchanges.

At issue is China’s longstanding refusal to allow the PCAOB to examine audits of firms whose shares trade on the New York Stock Exchange (NYSE), the Nasdaq, and other US platforms. The inspections by the little-known agency, which Congress created in 2002 in response to the massive Enron accounting scandal, are meant to prevent fraud and wrongdoing that could wipe out shareholder value. While not technically part of the government, the PCAOB is overseen by the Securities and Exchange Commission (SEC). This ability to inspect audits of Chinese firms that list in the US is certain to come up at a roundtable that the SEC is holding on 9 July, on the risks of investing in China and other emerging markets (EMs). According to the SEC, 224 US-listed companies, representing more than $1.8trn in combined market capitalisation, are located in countries where there are obstacles to PCAOB inspections of the kind this legislation mandates – most of those companies (213 as per Figure 1) operate from China/Hong Kong. 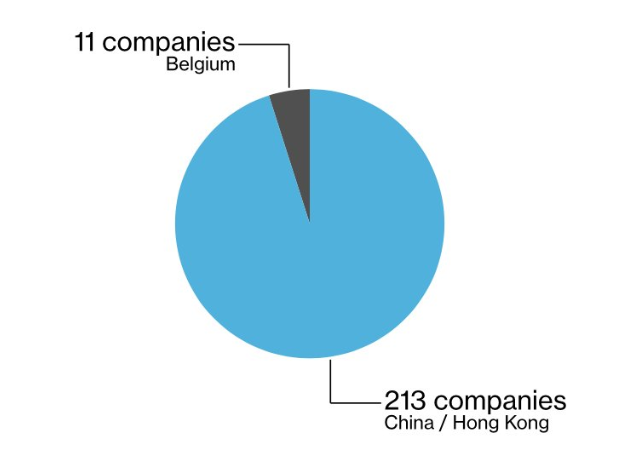 This all comes in the wake of a recent scandal around Nasdaq-listed, Chinese coffee-chain, Lukin Coffee, which Nasdaq has threatened to delist following a revelation that the company fabricated about $310mn of sales in its financial results (c. 40% of annual sales).

We’re not sure what the final legislation will look like, if and when it will be approved and it is also not clear to us, based on the description of the proposed legislation, whether the requirement for the PCAOB to access audits is in addition to the declaration regarding foreign government control. If companies which self-declare that they are not controlled by a foreign government would not be required to give the PCAOB access to their audited financials, then this seems like a fairly toothless piece of legislation. However, if companies do need to meet both requirements then it seems to us almost a foregone conclusion that Chinese companies will not be able to meet those requirements under current Chinese state-secret laws and may be forced to delist from US exchanges in three years.

US-listed Chinese companies may follow Alibaba’s Hong Kong listing. JD.com and NetEase IPOs are in progress, with large caps such as Pinduoduo, Baidu, TME and Trip.com likely to follow. The Hong Kong Stock Exchange (HKSE) has sought to position itself as an alternative for Chinese companies seeking international capital. This included a recent relaxation of its rules that prevented companies with multiple share classes and different voting structures from listing in Hong Kong. Alibaba listed on the New York Stock Exchange in 2014 and in November 2019 Alibaba raised $13bn with a secondary listing in Hong Kong, issuing shares that represented about 3% of its total shares in issue. The Hong Kong and US-listed shares are fungible (i.e. the shares can be transferred between exchanges), with each US-listed share representing 8 ordinary shares, while the Hong Kong shares have a 1:1 relationship with the ordinary shares. Currently about 22% of Alibaba shares are listed on the HKSE.