In March, Naspers unveiled plans to list a company (initially referred to as NewCo, but now named Prosus N.V.) on the Euronext Stock Exchange in Amsterdam. Prosus will include all of Naspers’ internet interests outside of South Africa (SA), including its 31% stake in Tencent and investments in mail.ru, OLX, Avito, letgo, and PayU etc. In August, Naspers shareholders voted overwhelmingly in favour of the Prosus listing in Amsterdam on Wednesday, 11 September. So, with the long-awaited listing day finally arriving, in this note we share some thoughts on Prosus, Naspers and the new entity.

In Figure 1 below, we highlight that Naspers is currently trading at a discount of about 33% to its NAV. Cash and its listed components account for c. 89% of Naspers’ NAV, so this is a relatively transparent number. 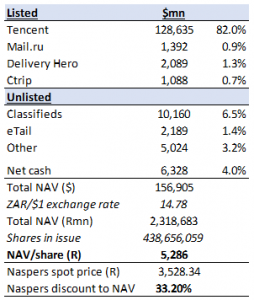 How does the current and historic discount compare?

Naspers’ very long-term historic average discount to NAV has been c. 25%. Over the past 2-3 years, as Naspers’ size on the JSE has become an increasingly binding constraint, we have seen the discount widen to 35%-45%. In Figure 2 below, we highlight Naspers’ discount range since the Prosus plan was announced. 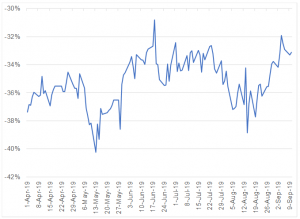 What type of discount is the market implying for Prosus and Naspers post the Prosus listing?

The million-dollar question currently is at what discount to NAV the two listed vehicles (Naspers and Prosus) will trade at in the future. We have argued that the case is strong for Prosus to trade at a considerably narrower discount to NAV than Naspers has in the past. In the case of Naspers, however, we can’t see anything changing that would cause its discount to narrow relative to its recent history. Our main concern is that, once all of the initial rebalancing noise is out of the way, Naspers’ market cap will still be too big for the SA market, making local investors forced sellers whenever Naspers outperforms the broader market. This is because local institutional investors will continue to be limited by the cap on maximum exposure they can hold in a single stock in their funds.

Ahead of the listing of Prosus, investors can calculate what the market is implying the discount will be on Prosus, depending on what they assume the Naspers discount returns to once it is no longer trading with the embedded option to take up Prosus shares. If we assume that Naspers returns to a 37%-40% discount once Prosus lists (a similar discount to that prior to Naspers announcing its plans to list Prosus), it implies that the market is pricing in a discount of 15%-23% on Prosus. This looks reasonable to us and suggests that there is not an obvious risk-free trade to be made here ahead of the Prosus listing. 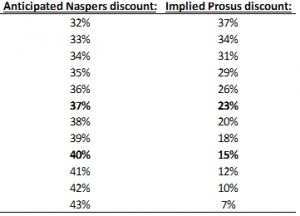 What are the critical dates/times of which investor should be aware?

We note that, from the above timeline, it is possible to see at what discounts the two instruments (Naspers and Prosus) trade relative to NAV before finally deciding which option to choose. For tax-sensitive investors, if the discount gap between Prosus and Naspers turns out to be much smaller than expected, it would be better to take the Naspers shares and NOT trigger the capital gains tax (CGT) event! However, the danger here is that trade in the initial couple of days might not be reflective of where the discounts ultimately settle.

Who can trade Prosus in the first few days before the shares physically appear in shareholders’ accounts?

The JSE operates on T+3, while Euronext is on T+2. This means that if you sell your Prosus stock tomorrow, these shares will be in your account to settle the trade on Monday. The problem lies with shareholders on Euronext who need to settle on Friday. According to stockbrokers, in practice, there is a grace period of an extra 2 days before trades truly fail on Euronext. Thus, it seems even holders of Prosus shares on Euronext will be able to trade their Prosus shares from the day of listing without the trade ultimately failing. There is a risk here that someone sells their Prosus shares and then has a change of mind and opts for Naspers. As a result, brokers may refuse to trade Prosus for non-institutional clients until the shares are physically in their accounts. Here it is important to bear in mind that Naspers is also free to sell its shares if it wants to, so this could be a source of liquidity.

The other area of confusion involves what various groups of investors intend to do:

It seems more likely that the greater natural demand will be for Prosus but a lot will depend on where each counter goes relative to its NAV. If Prosus trades at a discount of <10% and Naspers at a discount of >45%, for example, the smart money would probably be selling Prosus and buying Naspers

It’s pretty clear that the trade could be very noisy up until next Monday. This is especially so given the confusion about who can and can’t trade Prosus and that is the reason why we wish to flag the concern around assuming where the discounts are in this period being a good indication of where they ultimately settle.

Suffice to say that movements in the share prices of the listed investments (Tencent in particular) and the exchange rate mean that the underlying NAV is constantly shifting. However, as long as US President Donald Trump doesn’t make any reckless statements around the trade war with China over the next few days, the Chinese don’t decide to send the army into Hong Kong to confront protestors and Eskom keeps the lights on in SA and so on … we shouldn’t see too much movement.

At this point, we calculate that the NAV/share after Prosus lists will be as follows: