Naspers/Prosus: Update on the respective discounts to NAV

Following a c. 24% rally in the Tencent share price (Naspers owns a 31% stake of the Hong Kong-listed tech Group, which accounts for >80% of Naspers’ net asset value [NAV)]) from c. 4 December 2019 to Monday’s (13 January) close, we highlight what has happened to the Naspers and Prosus discount to NAV below. Currently, we estimate the Naspers discount to NAV to be c. 45.2% and the Prosus discount to NAV c. 30.2%. As can be seen from Figure 1, these discounts to NAV have gone pretty much one way since Prosus listed on 11 September 2019. 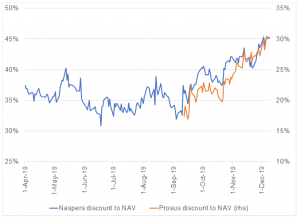 The discount has widened appreciably during the recent rally in the Tencent share price. A theory that made a lot of sense to us was that the discount widened during periods when Tencent was appreciating steadily, because the resultant rise in Naspers’ share price caused SA institutional investors to exceed their single-stock exposure limits, thus making them forced sellers of Naspers. SA investors being forced sellers of Naspers might explain why the discount has widened recently for Naspers, but what we find interesting is that Prosus has seen a similar widening in its discount and does not have the same problem. It is possible though that SA institutional investors are treating the two shares as the same exposure, irrespective of the decision taken by the JSE to treat them as separate for index purposes.

The other recent development, worth contemplating is that Prosus was not successful in its bid to gain control of Just Eat in the UK. Shareholders opted instead to back the board’s recommendation and go with the offer from Takeaway.com. Our sense was that Prosus shareholders were not particularly positive on this deal and fearful that Prosus was overpaying for Just Eat. Opinion on the ultimate profitability of the food delivery vertical is very divided (Prosus management’s extreme bullishness notwithstanding!). If concerns about this deal were behind the widening in the discount over the last few months, one would think that removal of this risk might be grounds for the discount to narrow.

It’s hard to apply much from a fundamental perspective to predict where this discount should be and hence where it goes from here. In the absence of a big correction in the Tencent share price though, the commitments that Prosus management have made to take further steps to address this discount in the medium term suggest that we are at levels from which there should be good upside if management does indeed follow through. We still believe the optionality lies in Naspers rather than in Prosus.