On 12 May, Naspers/Prosus announced the next step in its plan to unlock value, with the main terms of the announcement highlighted in our report dated 25 May 2021 and entitled, Naspers/Prosus: Another difficult choice ahead for Naspers shareholders. The deal announced was probably not among the possibilities that most investors had considered likely and, judging by the widening discount at which Naspers and Prosus have traded relative to their net asset values (NAVs) since, investors have been distinctly underwhelmed. In this note, we discuss how Naspers/Prosus shares have been performing of late, update investors on where things currently stand with the two companies’ respective discounts, and we look at Prosus’ trading update released on Thursday (10 June).

At present, we put the discount to NAV at 51% for Naspers and at 36% for Prosus. That is relatively wide compared to their respective histories but still some way off the widest the respective discounts have ever been. In Figure 1 below, we show a black dotted line where the recent share-swap offer was announced (12 May). Since then, the Naspers discount has tracked pretty much sideways, while Prosus’ discount has narrowed slightly. 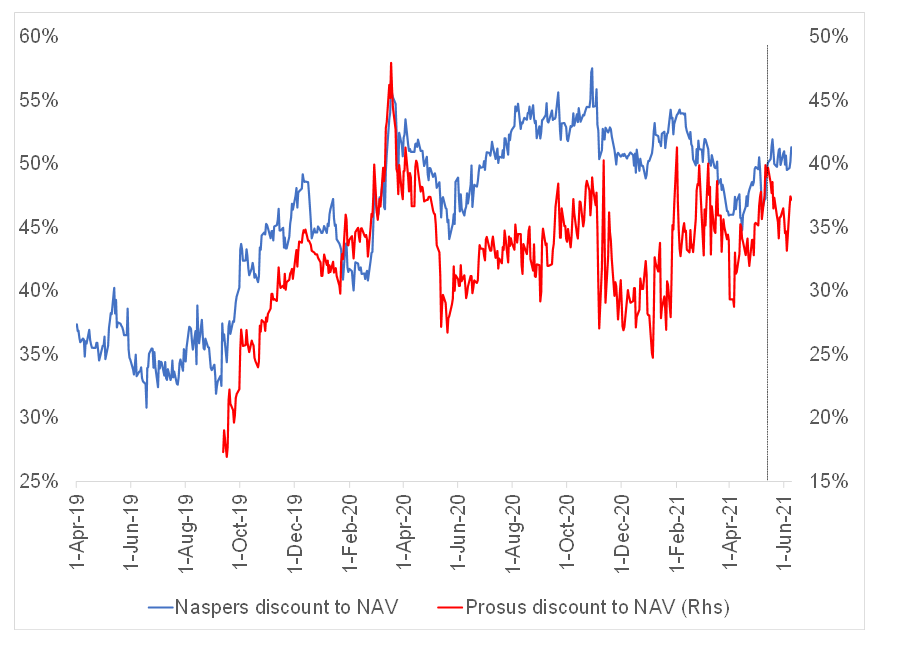 Looking at the gap between the two discounts in Figure 2 below, we see that for a long time before the deal was announced, the gap was narrowing (in other words, Naspers was outperforming Prosus). This was exactly in line with our expectation that the next step to unlock value would most likely favour Naspers shareholders rather than Prosus – recall that the move most of us were expecting was for Naspers to distribute more Prosus shares to its shareholders and reduce its stake in Prosus from 72% to 50.1%.

Figure 2: The spread between Naspers and Prosus’ discount to NAV 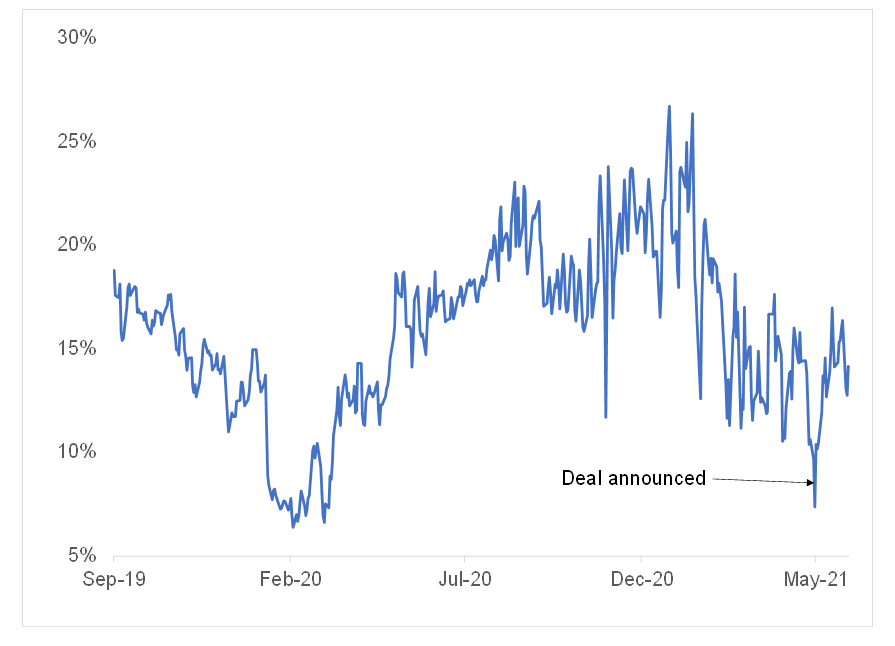 In summary, we note that investors have had a bit of outperformance from Prosus since the announcement. Although the poor absolute performance of these shares has made it feel like the discount must be blowing out, it has possibly been a bit more moderate than investors might think – Naspers has gone from a 47.5% discount the day before the announcement to 51% currently (most of that decline occurred on the day of the announcement), while Prosus’ discount has gone from 39.9% on 11 May to 36.3% as at 10 June. This price action could imply that investors that have been holding Naspers in anticipation of a big value unlock have sold their shares and given up on that trade (as highlighted in our note Naspers/Prosus: Another difficult choice ahead for Naspers shareholders).

Once this deal is done, it is very difficult to anticipate what corporate action comes next from these companies without significant tax/excon implications. If the deal does go through, as we pointed out, shareholders in Prosus get a c. 6% NAV uplift and Naspers shareholders, who opt to tender part of their stake, get close to a 10% NAV uplift. It is interesting that the current share price action suggests to us that none of this is currently being priced into their respective share prices. The next catalyst for these counters will be the release of FY21 results from Naspers/Prosus on 21 June. Given the decidedly underwhelming response to the announcement, it will be very interesting to see what management have to say at that point.

Regarding progress on the share buyback, as a reminder, the Prosus portion was completed in February 2021. In recent months, Naspers has been spending between US$100mn to US$150mn/week on the share buybacks. By the week ended 4 June 2021, it had US$238mn left to complete the US$5bn programme. According to our calculations, this share buyback should be done by the time Naspers announces its results. Keep in mind that, along with the share swap, the Group has announced another US$5bn share buyback. Given how little impact the last one had, however, it is probably not altogether surprising that this is being largely ignored by the market.

It is clear to us that sentiment around this Group is very negative at present. Given the way events have unfolded for tech companies during the COVID-19 pandemic, the company’s sales of Allegro (a Polish ecommerce marketplace), and Flipkart (an e-commerce company in India) are not looking so smart right now – admittedly, this is easy to say with hindsight, but the jury is also out on how well Naspers’ push into fintech, food delivery, and online classifieds is going. Certainly, pressure is mounting on management, and it will be interesting to see what management’s message to the market is when the company reports its results.

At present, our view is that we are close to maximum pessimism in terms of Naspers/Prosus – their discounts to NAVs are wide, the rand is strong, and recent weakness in Tencent means its valuation is much less demanding than it was in the past (if you strip out the tech investments that are not contributing to earnings, it is on a forward PE of c. 22x [or closer to 30x if you do not strip out these investments]). Assuming the share exchange does go ahead on 16 August, there is a NAV uplift that is not completely insignificant. It is proving very frustrating to have such large exposure to this Group when other SA Inc-related shares have been rallying, but we nevertheless believe it will be a senseless move to capitulate and sell the shares at this point.

In other Naspers/ Prosus-related news, Prosus came out with a trading update on Thursday (10 June) ahead of the release of its FY21 results (to end March) on 21 June. The most relevant number, in our view, is core headline earnings, which Prosus is guiding will be up by between 41.1% and 47.9% YoY in US dollar terms. This implies an earnings range of between USc292 and USc306/share. Bloomberg consensus analyst estimates are currently forecasting USc306.5/share – so not a major surprise. We continue to see Naspers/Prosus as more of a venture capital fund and we think it is not really fair to look at earnings when its business model is one in which it is investing in early stage (usually loss-making) internet businesses and then selling them when they have scaled, and the market is prepared to pay a full valuation for them.

Still, we believe that investors have also become tired of the never-ending losses in the rump and the inferior growth that Naspers has delivered vs investing directly in Tencent. While it looks to us like earnings are going to come in a touch below expectations, we think it is encouraging that the growth rate is well ahead of what Tencent is delivering. If Prosus can develop a track record where this remains the case, maybe it will start to build an investment following interested in the company for its own sake rather than just as a proxy for Tencent. The absolute growth which Prosus is set to report is impressive but, given where consensus analyst expectations are at, we are not sure this is likely to be market moving.

We are not sure that this latest announcement changes much, but it does confirm that management is intent on proceeding with the deal despite the chilly reception it has received from investors.