How did your assets perform over the past 10 years?

“I’ve learned that life is like a roll of toilet paper. The closer it gets to the end, the faster it goes”

This year end takes on particular significance as it marks the end of the decade. Does that matter particularly from an investment perspective? In reality, no it doesn’t. However, it is probably in our nature to use these points in the calendar to reflect on what has passed, as well as to re-evaluate our plans for the future.

With that in mind, we thought it would be interesting to look back at the past decade and see how investment choices you might have made would have turned out. In Figure 1 and 2 below, we show the total returns, in US dollars, for a selection of asset classes (including some unusual ones for the more adventurous out there!).

Figure 1: Asset total returns over the past 10 years (US dollar) 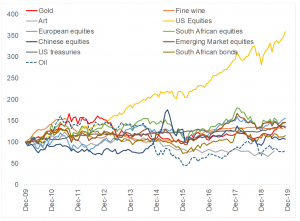 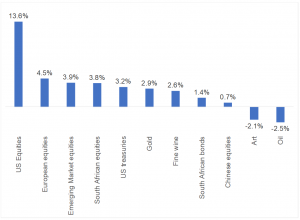 A few points to ponder:

Bringing the theory home: Our behavioural biases in a South African context

A generation that saves

Long-term investing in a world of instant gratification