On 20 April, we published our outlook for South African (SA) fixed income in a note entitled Update: SA bond yields and the implications for domestic income funds. It included yield targets for both the R186 (six-year bond) and the R2030 (ten-year bond). At the time, we set yield targets of 7.60% and 9.30% for the respective bonds, which meant that we were projecting significant capital gains for the asset class. However, the domestic fixed income recovery has been faster than we had anticipated, in part because of local market support from the SA Reserve Bank (SARB).

In Figure 1 and 2 below, we highlight the charts we use to monitor the yield on bonds vs our target yield. In both cases, local bonds have recently traded at our target yield, before selling off a little. This means that we think that the market snapback for fixed income is complete and that the easy capital gains are now in the bag. 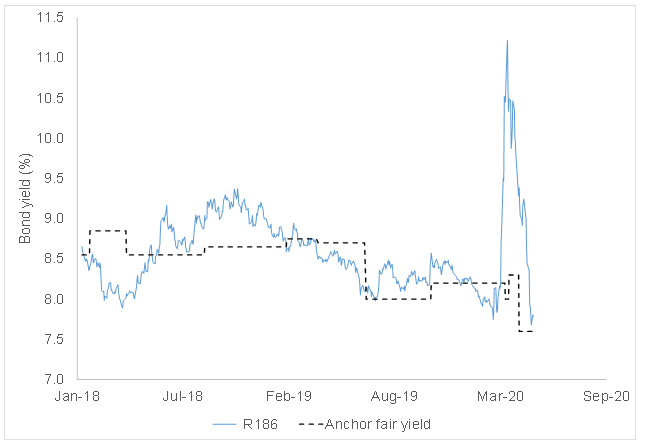 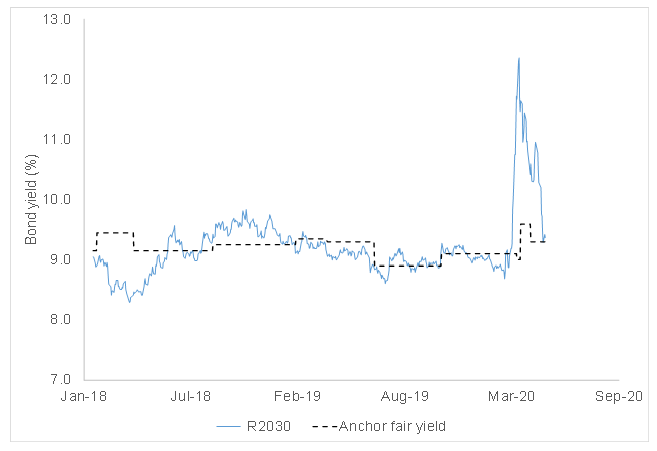 The above begs the question as to what the outlook is for this asset class going forward. We highlight that this has made for a spectacular start to May for those portfolios, with the Anchor BCI Flexible Income Fund returning 0.89% in the first 11 days of the month, while the Anchor BCI Bond Fund returned 4.66%.over the same period.

Key factors to watch over the next six months

SA yields remain high, which means that the asset class is still an attractive way of generating accrual interest income over time. The portfolio yield on the Anchor BCI Bond Fund remains above 10.00%, while that of the Anchor BCI Flexible Income Fund will probably be maintained at between 7.50% and 7.75%, over time.

The capital gains from domestic bonds are now in the bag, however, we maintain that there is still some recovery from hard currency bonds that will play out in the Anchor BCI Flexible Income Fund. We are guesstimating that we could still see a 0.50% benefit to the fund from this source in the next year. We expect a longer recovery timeframe for listed property.

This leaves us with the following outlooks for the next 12 months on a before-fees basis.

The reality is that as market yields have normalised towards lower levels, we have seen portfolio yields slide lower as well. Investors will therefore need to recalibrate their expectations from the asset class towards the new normal over time.

We point out that SA consumer price index (CPI) inflation will probably print with a 3% handle on it for the next while (likely even pushing below 3% for a few months). This means that, while the absolute returns are not what they once were, investors are still able to generate reasonably safe returns of CPI +4% to CPI +7% from the fixed income asset class. For many investors this is quite an attractive proposition.

We also highlight that all fixed income products will experience this downward drift in yield over time and that we expect call accounts to yield around 4.5%, whilst money market funds will offer c. 5.00%. Therefore, we still see some attractiveness to these portfolios.

We have noticed several clients risking up recently by moving from the Anchor BCI Flexible Income Fund to the Anchor BCI Bond Fund to maintain their income yield. Each investor is different, and their circumstances are specific to each individual. We therefore cannot comment on the appropriateness of risking up, however, we do advise caution in terms of understanding that the bond fund will be more volatile and that it is not suited for short-term investments.

The outlook for fixed income markets is dependent on global and domestic developments from here on out. Some of the factors that we are watching include:

The SARB has also been active in buying bonds. The extent to which it continues to do so will, in the short term, keep bonds well supported. We caution, however, that too much of a good thing is bad and that it is a delicate balance between buying enough bonds and buying too many. With bond yields now at our fair yield, we think that there is good reason for the SARB to stop supporting the market.

Overall, we remain optimistic on the country’s outlook, but we are also realistic as to the risks that investors face. We think that yields offer attractive income solutions for clients and we expect that, as the lockdown is inevitably unwound, this asset class may find that it benefits from a tailwind once again. The most realistic expectation from here is that the asset class will move broadly sideways, allowing investors to generate attractive income through a volatile period.