Fixed income investments and the implications of a rating downgrade

South Africa (SA) is facing a rating review from Moody’s, the only credit rating agency which still rates SA sovereign debt as investment grade, on 27 March 2020. After years of mismanagement of the economy, the inevitable is catching up with government (and the country) and there is a very real prospect of SA being downgraded to junk status. Along with the psychological effect on confidence that this will have, there are some impacts on the investment and currency markets that we need to discuss.

Moody’s downgraded SA to a negative outlook on 1 November in response to a diabolical Medium Term Budget Policy Statement (MTBPS) on 30 October last year. This does not mean that a full downgrade to junk is inevitable and, in practice, only 33% of countries that have been placed on a negative outlook have been formally downgraded within 18 months of that outlook change. In fact, Moody’s Vice President and lead sovereign analyst for SA, Lucie Villa said in an interview in late January that the outlook change was very recent and that it was a “bit early” to assess the situation properly.

Anchor’s view remains that a sensible budget towards the end of February and a believable and workable plan for Eskom will be enough to see the current rating affirmed, buying time till the review scheduled for 20 November this year.

That said, on the current trajectory SA is headed for an inevitable downgrade and eventual financial ruin. We need policy changes that will enable growth and encourage the middle class to invest for a future in SA rather than abroad. Current government proposals such as flying empty aircraft around the country to keep cabin stewards unproductively employed is a clear indication of how difficult government is finding it to adjust to the reality of fiscal constraint. The plan to invest R250bn of pension money to keep Eskom from rightsizing its workforce is equally hair raising. Think about it, R250bn to save 16,000 jobs amounts to R15.6mn per job. This is the amount of your tax money that the government is prepared to spend to keep the apple cart going. Unfortunately, economic reality always wins out, it’s just a question of how much money we want to spend in defying gravity.

If we assume a continuation of current policies and economic plans, then a downgrade to junk is inevitable. SA fixed income investments are incredibly attractive at present. Investors can lock in CPI + 5% as an investment return by just buying a 10-year government bond. In fact, simply putting your money in a bank deposit can earn you CPI + 2%. Indeed, we are not alone in seeing this as an attractive investment opportunity and foreigners have bought in excess of R16bn of local bonds in the first 40 days of 2020. While it is good to see bonds offering attractive returns, we also need to understand the risk of how these bonds will behave at the time of a ratings downgrade.

In Figure 1 below, we look at the domestic bond yields for several countries before and after a rating downgrade which resulted in those countries losing their investment grade status and becoming junk rated.

Figure 1: A comparison of countries 12 months pre- and post a sovereign debt downgrade 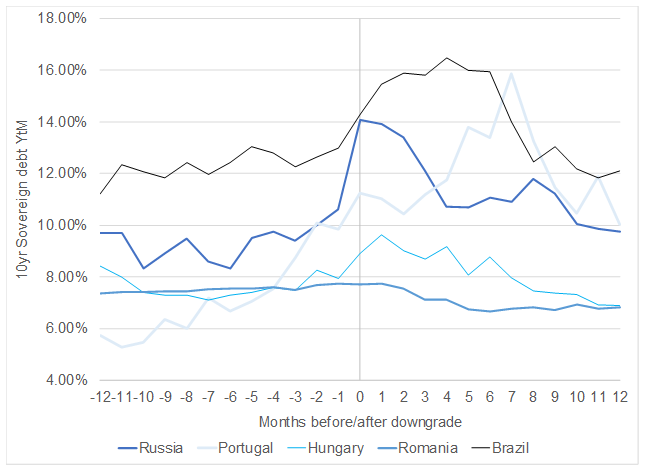 There were only two exceptions to this – Portugal and Greece. These two countries were pushed to junk status at the height of the European debt crisis. As a result, the sell-off in their bonds and their subsequent recovery took longer. If one were to redraw the chart in Figure 1, you would need to extend it to a little over two years for the Portuguese and Greek bonds to fully recover from the shock of being downgraded.

We also charted the behaviour of those country’s currencies against the US dollar (except for the euro, which is applied in Greece and Portugal). The domestic currencies followed a similar path, weakening into and just after the downgrade, before recovering to follow their historic trend as suggested by the purchasing power parity (PPP) model.

As portfolio managers of bond funds, this has some profound implications. First, we are not fully invested currently and we are holding cash back. If there is a downgrade, there will be a buying opportunity as forced sellers scramble to exit positions. We want to have some cash available to take advantage of the buying opportunity that this presents.

Second, SA bonds are highly attractive today. If the downgrade is delayed by a year (which is entirely plausible) then there is a significant opportunity cost to our client base from not being invested. We need to lock-in some of those CPI + 5% returns for savers. If the downgrade arises, then it is ok. There will be a three- to six-month period of volatility but, if we are comfortable to stay the course, then we know that in almost all cases, within 12 months the bonds have recovered all of their lost ground and often have shown some small gains. The downside from being invested through the downgrade is low, whilst the opportunity cost of sitting this one out can be quite high.

Finally, we also note that most retail clients prefer the Flexible Income Fund to the Bond Fund. Here the risk is materially lower as well. A portion of this portfolio is US dollar denominated. We are likely to see some gains on holding dollars through a downgrade. This would insulate the investor from the possible short-term adverse mark-to-market implications of holding bonds. We would expect a rather stable outcome.

The main risk is that investors panic at the time of a downgrade and sell out of their positions at the lows. This will crystallise the loss and lock it in. Bonds are a mean-reverting asset class which means that if they make a loss in one period, they will always earn this back for you before their maturity. A patient and stable investor can make this safety feature of bonds work for them, while they lock-in an attractive return profile for the next few years.