Exxaro reported results for the year ended 31 December 2020 (FY20) on 18 March. Group revenue rose 12% YoY to R28.9bn and, despite COVID-19 restrictions, the company declared a record ordinary dividend buoyed by its best-ever thermal coal exports (up c. one-third to 12.17mn tonnes), a weaker rand and a fantastic year for its iron ore operations, thanks to strong iron ore pricing (iron ore prices soared c. 88% in 2020).

Coming into these results, the focus had been on what Exxaro will do with its Tronox proceeds. On 1 March, Exxaro sold the remainder of its Tronox stake and received R5.76bn in proceeds. It announced last week that it will return the cash to shareholders through a special dividend and a share buyback of R1.5bn or 3.25% of the company’s closing market cap on 18 March.

Going forward, Exxaro said that it will continue to pass through the dividend it receives from Sishen Iron Ore Company (SIOC) to shareholders (that dividend was R3.7bn or R14.59/share in FY20). It will also pay out between 29% and 40% of Group core net profit after tax (excluding SIOC). Exxaro has been a very shareholder-focused company over the past few years in how it has returned cash to shareholders (dividends per share [DPS] over the past three years have amounted to R70.96 cumulatively), which is particularly attractive. This is also especially important at this stage of the commodities cycle. 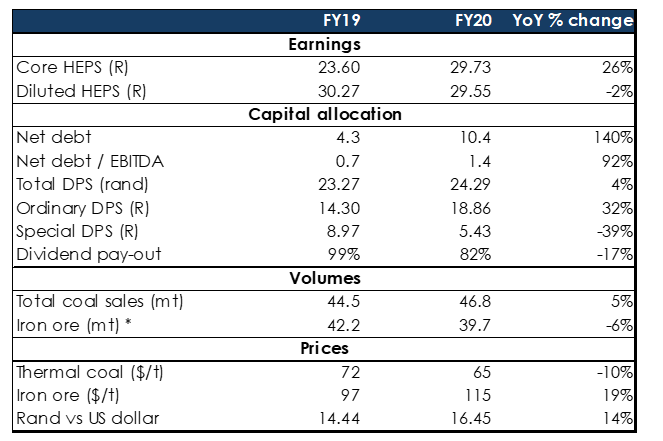 Exxaro has received R5.8bn from selling its Tronox stake. In addition to the ordinary dividend, it will return the cash to shareholders as follows:

The company wants to keep net debt/EBITDA below 1.5x. As at 31 December 2020, that ratio stood at 0.96x. Figure 5 below shows that Exxaro has been aggressive in its cash returns to shareholders over the past few years. 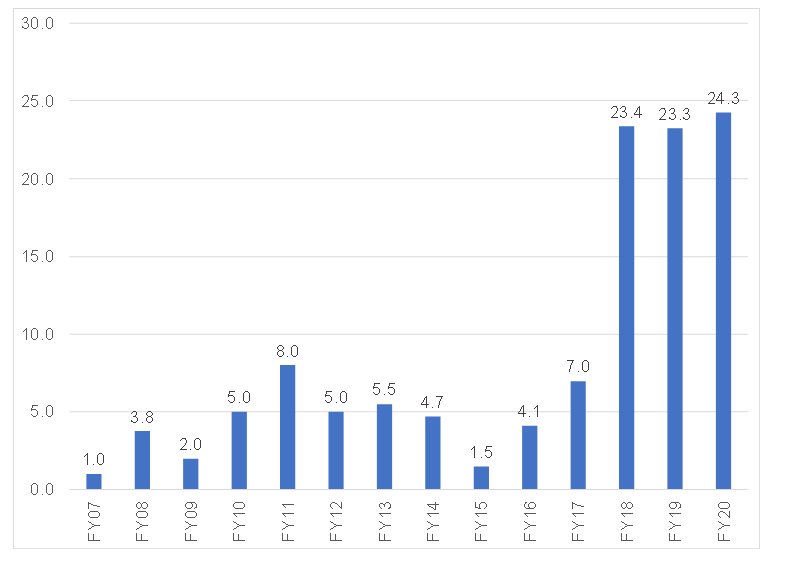 A SoTP valuation (see Figure 2), using market prices for Kumba is currently R218/share or 19% higher than Exxaro’s current share price. Most of that SoTP value lies in Kumba/SIOC. We therefore estimate that a 20% decline in Kumba’s share price would wipe out that upside in Exxaro’s SoTP value. Given the current caution around iron ore prices, such a decline does not seem out of the question for Kumba and, for this reason, we remain cautious and would not be buyers of Exxaro at current levels.