Could Apple double in value from here?

Apple has created an astonishing amount of value for its shareholders over the past decade and, indeed, over just the past 5 years as the share price has more than quadrupled. Now standing as a gargantuan 6% constituent of the S&P 500 Index, the trajectory of the business from here will have a meaningful impact across global retirement savings accounts and investment portfolios – meaning it is now more important than ever to have an informed view.

Given the US$360bn in annual revenue, and US$80bn in free cash flow (FCF) – you would be forgiven for scoffing at the prospect of Apple once again doubling in value over the next 5 years. However, it is important to consider that the company is in the midst of a transformation which may achieve exactly that.

As the growth of the hardware business moderates, so the services business (which includes the App Store and subscription services like Apple TV+) is beginning to accelerate. Apple’s walled garden of 1bn active iPhones worldwide means that just US$1 of incremental services revenue from each user per month would add US$12bn (3.3%) to Group revenues at more than double the hardware business’ contribution margin (Apple makes a 70% gross margin on services revenue, vs 30% on its hardware sales).

While we suspect this shift may double Apple’s profits by 2026, the share price is certainly not discounting this optionality – with the market effectively pricing in a slowing hardware business and steady-but-slow services revenue growth.

In our view, this presents investors with a window of opportunity to acquire Apple shares at a price that suggests Apple’s best days are behind it – when in fact we think the opposite may be true.

For those interested, we explore our thinking by expanding our thesis across four key subjects. These include:

1. Growth over the next 5 years will not be linear

Looking at analysts’ forecasts for Apple’s earnings growth over the next 2 years, the story does not appear to be overly compelling. Do not let this distract you – we have been here before. Historically, Apple’s growth path has been lumpy, and the years when earnings have consolidated have been those years when the stock has delivered outsized returns (in anticipation of the next wave of growth – see Figure 1 below).

Here we highlight how, despite several periods of flattish revenue/earnings growth, Apple’s 5-year compound annual growth rate (CAGR) for revenue stands at 11%, EPS at 20%, and the stock price at 34%.

This makes sense since the development, launch, and growth of new products and services is not linear – and we should not expect it to be. Hence, the unexciting numbers for FY22 and FY23 are not actually important if you have the right (longer-term) perspective. We have little doubt that a similar pattern will follow over the next 5 years, with similar CAGRs for revenue, earnings, and the share price.

2. The business has re-rated, but it is not too late!

As can be deduced from the increase in Apple’s price to earnings (P/E) ratio, a significant proportion of the increase in Apple’s value has been explained by the re-rating of the firm as a more valuable annuity services business, rather than a lower-value hardware business (see Figure 2 below). Barring a global financial crisis, Apple will never trade on a forward 15x P/E again.

The 34% CAGR in the share price over the past 5 years can be explained by 20% annual earnings growth, and a 14% rerating p.a. In order for the share to double again over the next 5 years, profits would simply need to continue to compound at a rate of at least 15% p.a. without any further rerating.

We contend that this is a fairly likely scenario, with earnings likely to compound at between 15%-20% as the growth rate of the higher-margin services business accelerates. 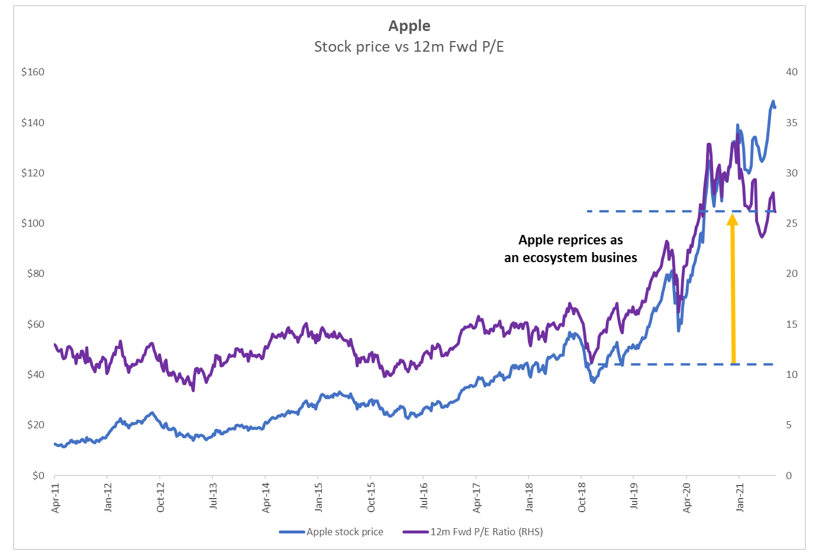 3. How fast does the services business need to grow for Apple to double in value?

Apple’s hardware business is maturing. Given its global market penetration (1.5bn active devices) and premium price points, investors (including ourselves) are likely to bet that further growth in this segment will be incremental.

The company’s ability to double its profits over the next 5 years is likely contingent on accelerating services revenue growth – and we suspect this is exactly what is starting to play out.

Some rudimentary math, assuming that the hardware business continues to grow at just 3% p.a. (i.e., the CAGR achieved over the past four financial years), shows that services will need to compound at a rate of 26% in order for Apple’s earnings per share to reach US$11.68 in five years’ time. Applying today’s forward earnings multiple of 25 yields a target price of US$292 – exactly 2x the current share price.

Although this is somewhat higher than the services segment’s current growth rate (low-20% excluding pandemic base effects), the trajectory of this growth rate is upward.

Roughly speaking, after excluding App Store commissions and Google’s licensing payments – Apple earns around US$24 in annual services revenue per iPhone user. This equates to just US$2 per month. Given the depth of Apple’s ecosystem, and its vision for it, we think there is huge scope for growth here (consider that Amazon Prime with music costs US$16/month).

Apple’s recently announced Apple One subscription service (US$14.95/month) points to a concerted effort to build out a compelling value proposition for Apple users, and the company’s US$80bn in annual FCFs certainly tips the odds of success in this endeavour in its favour.

We suspect that by 2026, Apple will be a business where hardware sales is the smaller contributor to profits – and a 26% services revenue growth rate from now until then will seem like a more obvious outcome in hindsight.

Figure 3: A 30% Services growth rate would more than double Apple’s earnings by 2026 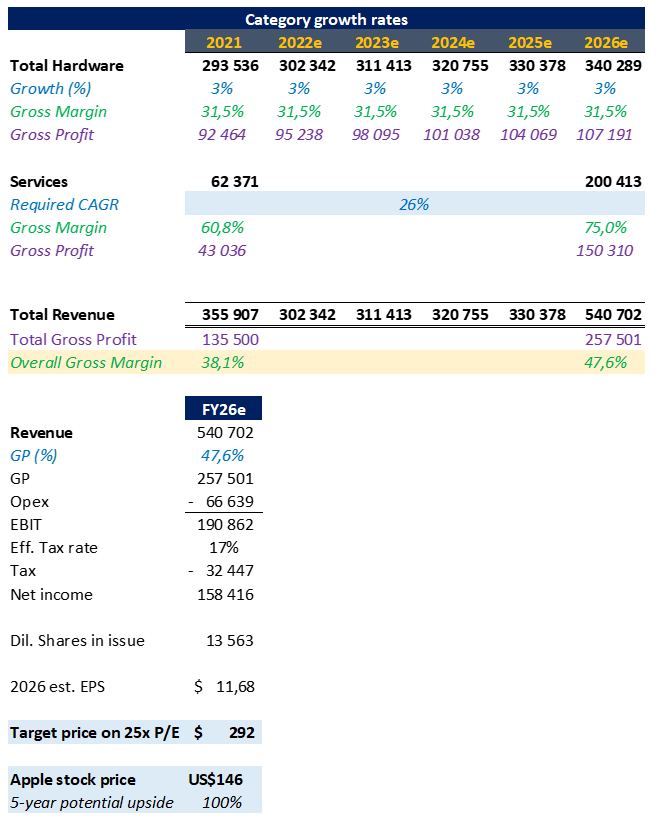 4. Appreciating the optionality inherent in Apple.

As has been the case for investors in the tech space over the past decade, having a firm handle on a company’s story and vision is equally as important as a firm grasp of the numbers. Evidence of good strategy, market optionality, and execution ability usually indicate success far earlier than the company’s financials – and we believe Apple demonstrates a high level of potential in all three of these areas at this point.

We highlight what are, in our view, some of the more exciting opportunities for Apple below.

Do not make the mistake of trying to contextualise Apple’s run-rate FCFF of US$80bn against its market cap of US$2.3trn. This grossly understates the optionality inherent in the business, and the logic would only make sense if its sole option was to return cash to shareholders.

Rather, think about the multiplier effect that a captive user base of 1bn users has on the value that can be created by an incremental US$80bn investment. By way of example, Apple only needs to spend 25% of its annual FCF to equal Netflix’s content spend. It could then flick a switch and activate a subscriber base of 1bn active users (3.3x the size of Netflix’s user base).

Anything that Apple IS NOT doing right now is a function of choice, not limitation. As an example, instead of trying to compete directly with Netflix, it has adopted the HBO model of quality over quantity, “featurising” entertainment keeps Apple users in the ecosystem, which seems to be Apple’s intention here (rather than building out a production business).

Some of the largest US sectors by revenue are probably not a bad place for a business with US$350bn in annual revenue to look to for growth including:

Currently, services accounts for just over 25% of Apple’s total revenue. This WILL increase, probably faster than anyone is expecting as the value proposition improves. There is no doubt that Apple is moving its ENTIRE business towards a recurring revenue model. The value proposition to consumers will probably be insanely compelling. Just imagine how sticky Apple’s revenues will be when your monthly subscription includes new hardware every 2 years (iPhone, Apple Watch, AirPods, etc.) and access to Apple Music, Apple TV+, and discounted medical/life insurance?

As this picture develops more fully, we suspect that Apple may even rerate further. Interest rates may impact growth stock valuations over the next 2 years – but the highest-rated businesses on the market are those with recurring revenue models.

If you have been watching the news lately, you would have noticed that Apple is attacking the privacy issue from the opposite end of the spectrum to Google, Facebook, and Amazon. Apple users are now able to opt out of app usage tracking, and email tracking has been disabled (both techniques used by advertisers to target users).

This is massively significant, as users who are increasingly privacy-conscious will choose the Apple ecosystem over others. We are not entirely sure how Apple wants to play this out, but it will be either:

Apple’s products are the gateway drug that hooks its users. It is the only technology company which is ALSO a luxury goods company. People want to BE SEEN using Apple devices, and BE SEEN shopping in Apple stores.

Have you taken a trip to the Apple store lately? Look at the Apple AirPods Max, or the new iMac. They are GORGEOUS devices that are literally leaps and bounds ahead of anything else in the market. Our guess is that Apple will continue to dominate the global on-person device profit pool which, at the risk of repeating oneself, will become a more valuable business as its devices are delivered via a membership model rather than through outright purchase.

Buy it, and hold it…

To summarise, the Apple share price currently looks like it is trading at fair value, even if we assume that the hardware business has matured and the services business continues to trundle along at a mid-teens growth rate.

We emphasise that the current share price is NOT discounting a meaningful acceleration in services revenue growth (which we see as a likely outcome in the future). Apple did not build a closed ecosystem of over 1bn devices globally, only to stop at hardware sales. It is also NOT ascribing a value to the insane level of optionality of US$80bn in FCF, which can be invested into an ecosystem of 1bn captive users.

In addition, several changes to Apple’s privacy policies are taking place beneath the surface, which is starting to make the company look like the panacea to the world’s data security and privacy crisis. The cynic, or perhaps the realist, might also see these new privacy measures as a walled garden that could hail the beginning of a new wave of shareholder value creation.

In our view, Apple can double in value over the next 5 years – although it is unlikely to be a linear journey. Buy it and hold it.