The Competition Commission’s (CompCom’s) final report on data prices entitled, Data Services Market Inquiry was released on Monday (2 December). Among the conclusions reached by CompCom was that mobile data is too expensive in South Africa (SA) and that pricing practices discriminated against the poor (the cost per megabyte [MB] for smaller bundles is higher than that for larger bundles). Remedies it is proposing include data price reductions of 30%-50% within the next two months, all sub-500MB bundles to have the same cost per MB, and that mobile operators should provide a daily free “lifeline package” of data to all prepaid users. Failure to comply would result in mobile operators facing prosecution. In our view, the findings have far-reaching implications, not only for the mobile telcos sector itself, but also for what the ruling says about the ideological direction of government regulators towards ever greater meddling in private sector commercial dynamics generally.

Since the publication several years ago of the Information and Communication Technologies (ICT) White Paper, which laid out the proposed new policy framework for the sector, we are seeing a clear intent from SA’s telcos regulators to be far more interventionist regarding price regulation. Meanwhile, government’s determination to press ahead with the Wholesale Open Access Network (WOAN), despite no precedent for such a project being successfully implemented anywhere else in the world, threatens to unnecessarily make SA the global guinea pig to test out this idea. Sadly, the history of telcos as state-owned monopolies means that governments tend to see the services they provide as a social right. This history and perception may explain the tendency to make demands that trample on normal commercial principles in a way that would appear totally unacceptable elsewhere.

Once governments cross the line and start dictating pricing for services, resulting in commercial returns on capital being undermined, the incentive to invest will disappear and the result will be a rapid degradation of services – provision of electricity in Nigeria is an excellent example of how destroying commercial incentives through price regulation ends. While it may not be perfect, the development of SA’s mobile telecommunications sector is one of the country’s success stories of the past 20-years – “don’t try to fix what isn’t broken” comes to mind

Below, we highlight the implications of the CompCom’s proposal: 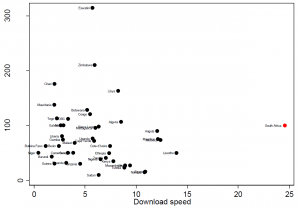 In conclusion, we see this as a very ill-considered move by the CompCom and we expect that there will be significant pushback with the chances of these demands being enacted as being quite low. However, it is yet another sentiment-negative blow for the sector and reinforces our view that this is a sector that is no more than a trading opportunity from time to time due to heavy-handed regulatory treatment across many markets in which they operate, which undermines our confidence in their ability to deliver sustainable growth. That said, the fall in share prices has pushed them to a level that presents just such an opportunity. Having been close to ZAc13500/share just a few weeks ago, Vodacom (11.4x 12-month forward PE; 7.3% prospective dividend yield) is now back at the bottom of its trading range of the past 18 months and has a strong dividend underpin at these levels. MTN (11.3x 12-month forward PE; 6.4% prospective dividend yield), at below ZAc9,000/share is also looking very interesting, with several potential positive catalysts over the next year or so (specifically around the disposal of non-core assets and cutting its gearing). We would, however, avoid Telkom, even after its share price drop. As pointed out above, its competitiveness in mobile would be seriously undermined if these price cuts were made by MTN/Vodacom. 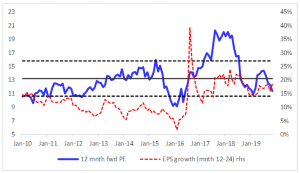 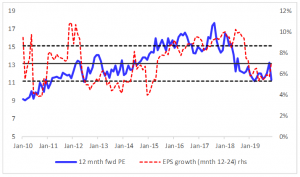 April global commentary: US earnings and economic activity surprise on the upside

Buoyed by resources, the JSE records a sixth-straight gain in April