Clicks reported good FY20 results on 22 October, despite incurring R44mn in COVID-related costs for personal protective equipment (PPEs), store hygiene, deep cleaning costs, etc. In addition, what Clicks may have lost in terms of the usual winter surge in demand for curative (pharmacy) products, due to a nearly non-existent flu season, were more than made up for by robust sales in preventative products (vitamins, supplements etc.). Group turnover rose 9.6% YoY to R34.4bn, with retail, health, and beauty sales up 8.4% YoY, while its medicine distribution unit, United Pharmaceutical Distributors’ (UPD’s) turnover jumped 11.2% YoY. The company’s online sales rocketed by 361% in 2H20, off a relatively low base with management saying that the business was now seeing the benefits of its e-commerce investments over the past four years.

During the period under review, Clicks opened 39 stores. It now has a retail footprint of 743 stores across South Africa (SA) as well as the largest retail pharmacy chain in the country with over 580 in-store pharmacies. Clicks’ UPD unit is also SA’s leading full-range national pharmaceutical wholesaler. The Group operating margin improved from 8.1% to 8%. Diluted HEPS grew by 13.7%. HEPS has recorded a CAGR of 12.3% since 2010, with maximum growth of 18.5% (in 2011) and minimum growth of 8.4% (in 2013). This highlights the remarkably consistent performance that Clicks has generated during a very tumultuous economic decade in SA. Clicks now has a net cash balance of R2.2bn, with return on equity (ROE) of 37.8% vs 37.0% in FY19. Clicks declared a solid full year dividend of ZAc450.  This dividend is up 1% from the FY19 full-year dividend of R4.45. Clicks also decided to reduce its payout ratio to 60%, which is slightly disappointing considering the Group’s very resilient business model and strong balance sheet. 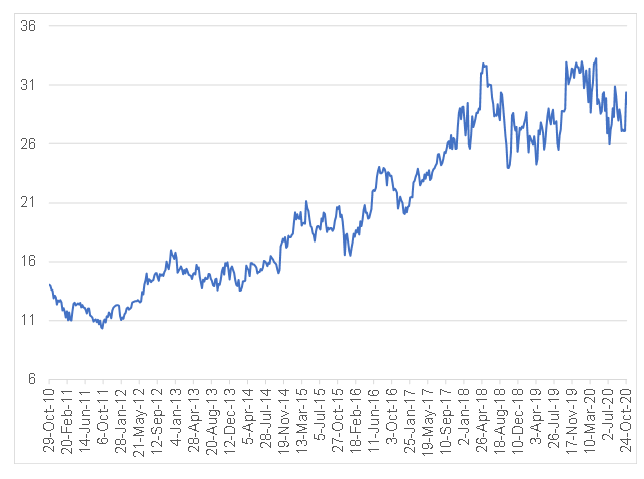 Clicks reported better-than-expected results in a difficult operating environment and the company said that, while it expects consumer spending to remain constrained in the year ahead, it has adapted well to trading in an economic downturn. Clicks is a high-quality business with a resilient business model and extremely capable management. However, the current valuation is very demanding, with the share price trading at a 12-month forward PE ratio of 29.4x. We also believe that Clicks’ growth profile is going to slow as its store expansion starts to move into more rural or more saturated markets. This may cause trading densities to reduce. Clicks does still generate significant operating cash and may start to distribute this cash pile to investors in the future. However, in our view there are other investment opportunities that provide a better risk-reward profile on the SA market.