Bidcorp released 1H21 results on 24 February, with the Group’s first-half characterised by a solid performance in Australasia, offset by a poor performance from its UK and European operations because of second-wave COVID-19 lockdown restrictions in Bidcorp’s second quarter (4Q20). We previously expected Bidcorp’s operations to normalise in FY22 and we maintain our view that the business will continue to benefit from out-of-home eating habits as the world returns to normal. We are pleased to hear that Bidcorp is already gaining substantial new business wins and contract extensions, indicative of market share gains in many of the regions in which it operates. Thus, we believe that these market share gains, the swiftness at which operations return to normality (given vaccination rollouts in most of the Group’s regions), and possible acquisitive opportunities in the near future, will stand the company in good stead. Although a degree of uncertainty does lie ahead, any positive newsflow on vaccine rollouts prompting a fast-paced recovery and a return to normality will likely be a catalyst for the share. We therefore recommend holding the share at current levels.

Key takeaways from the results 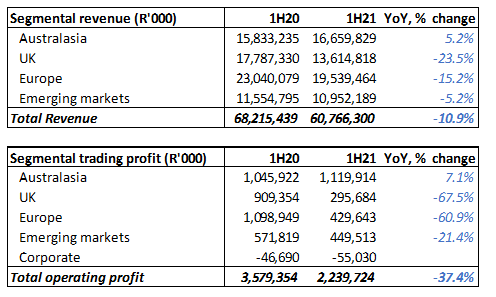 The company did not provide guidance given the uncertainty ahead but was nevertheless positive on its regions bouncing back relatively quickly from the easing of lockdown restrictions in affected regions. Management was adamant that they do not expect major long-term fundamental shifts in eating out-of-home but highlighted that the company is continuously looking to adapt and modify its business model to meet changing consumer requirements. Bidcorp is already experiencing market share gains in many of its markets as a result of a combination of its actions in FY20, as well as the exiting of competitors that were negatively impacted by the pandemic.

We have adjusted our estimates slightly and we now forecast R15.50/share earnings for FY22 (down slightly from our previous forecast of  R16.70/share)

Although we have adjusted our FY22 earnings expectations, given the uncertain operating environment, we think that Bidcorp could achieve earnings higher than R15.50 in FY22, depending on the pace of its recovery and return to normality, as well as the magnitude of market share gains. Using an exit PE ratio of 20x, we forecast a share price range for Bidcorp of between R310 and R340.