BHP Group last week reported decent, albeit not spectacular, results for the year ended 30 June 2020 (FY20). The company’s iron ore business carried the Group thanks to the strong iron ore prices during the period under review. However, BHP’s coal business, especially thermal coal, is facing structural issues and had a difficult year with BHP stating that it is looking to exit its thermal coal assets. At $12bn net debt in FY20, the company is at the lower end of its target range of $12bn-$17bn of net debt and said that it intends to remain there in the near term. We believe there is the potential for significant FY21 earnings growth, if iron ore prices remain at elevated levels for a meaningful period. In our view, BHP is well positioned as a low-cost producer to either capitalise (if prices remain high longer than expected), or to deal with a correction in the iron ore price, should that happen. The share is currently trading at a spot 8x multiple, which seems fair to us for a company that is the lowest-cost iron ore producer on the JSE. We remain buyers of BHP. 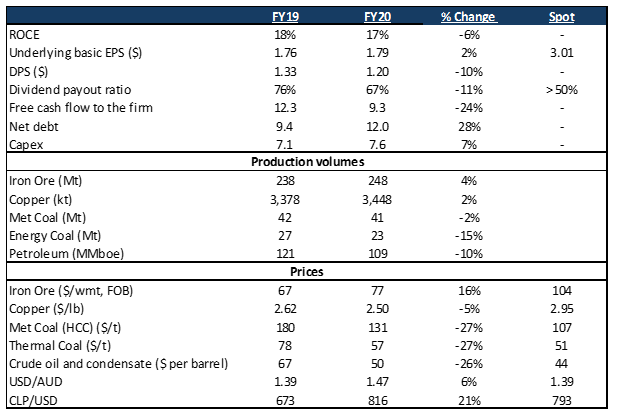 How good was BHP’s cost performance?

Which commodities were the major contributors to BHP’s FY20 earnings?

Iron ore was the major contributor to FY20 earnings, accounting for nearly half (48%) of BHP’s FY20 revenue and for 81% of its underlying EBIT (see Figures 2 and 3). 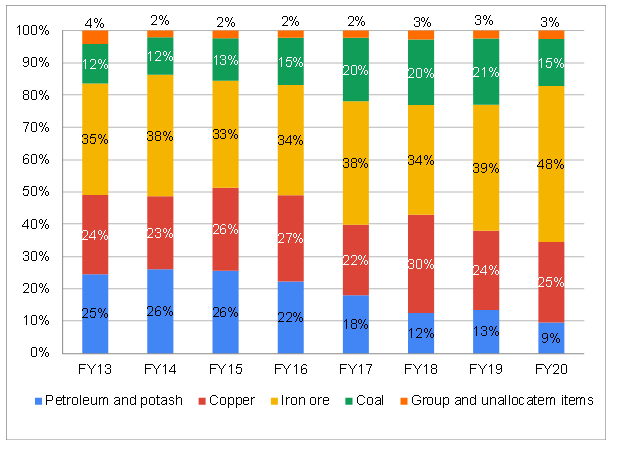 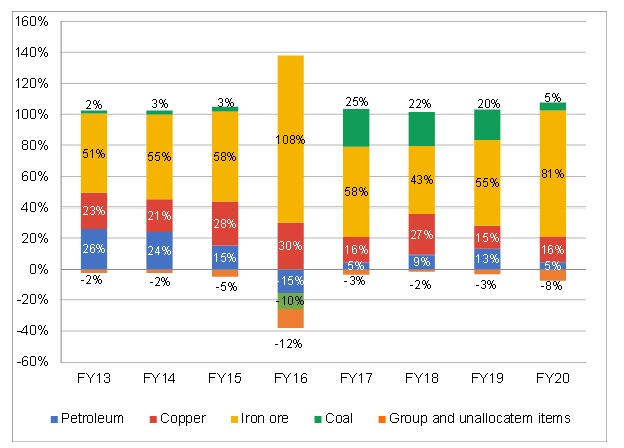 As Figure 4 shows, iron ore was the only segment which recorded FY20 EBIT growth. It was mostly higher prices that drove iron ore profits higher as iron ore volumes only rose by 4% YoY. Most concerning to us is BHP’s coal business. Metallurgical (Met or coking coal) coal prices are still languishing after demand evaporated due to the COVID-19 pandemic. BHP is hoping for these prices to recover during the first six months of calendar year 2021. Thermal coal prices are also struggling and BHP estimates that two-thirds of global export thermal coal production is currently loss-making. In addition, coal-generated power is expected to become increasingly less cost competitive compared to renewables and BHP has decided to exit all of its thermal coal assets as well as one of its met coal assets.

We have no concerns regarding BHP’s balance sheet (net debt/free cash flow is less than 1.5x). The company returned $7.0bn to shareholders in FY20 ($6.9bn in dividends, $0.1bn in share buybacks), much lower than the $16.8bn returned in FY19 ($11.4bn in dividends, $5.4bn in share buybacks). Net debt of $12bn is at the low end of BHP’s target range of $12bn-$17bn. The intention is to remain at the lower-end of the range for the near term. Further capital may be unlocked from BHP’s potential exits out of certain coal assets. Like several other major commodity businesses, BHP is looking to reduce the size of coal in its portfolio.

What is the outlook for FY21?

The FY21 volume outlook does not look exciting as per BHP’s guidance in Figure 5 below.

1) Petroleum medium-term production guidance has been revised from c. 110 MMboe following significant disruptions to oil and gas markets, reflecting BHP’s lower investment programme for the next 12 months. This represents average volumes over the period, with lower volumes now also expected at the end of the five-year period because of the Scarborough gas development delay. 2) Represents annual average copper production over the medium term.3) Other copper comprises Pampa Norte, Olympic Dam and Antamina. 4) WAIO’s current licenced export capacity is 290 Mt p.a. 5) Queensland Coal medium-term production guidance revised from between 49 Mt and 54 Mt, reflecting lower volumes due to a focus on higher-quality coals and a market responsive approach to bringing new tonnes into the market.

Iron ore, which currently accounts for 81% of BHP’s underlying EBIT, is expected to record 0% volume growth at the midpoint of guidance. Volume guidance for the Group’s other operating segments are generally also quite anaemic, but those segments account for only a small proportion of profit currently. So again, in FY21, the major focal point for BHP will be on iron ore prices. If higher spot iron ore prices persist, there is the potential for BHP to record meaningful earnings growth in FY21. Everything else in the Group’s portfolio, although important to watch, is currently small in comparison to its iron ore business.