Apple reported 4Q19 results on 30 October, which came in above expectations, with a 2% YoY revenue rise to $64.0bn and a 7% YoY increase in EPS to $3.03/diluted share vs revenue of $62.9bn, and $2.91/diluted share in 4Q18. Both beat Refinitiv consensus analyst expectations of $62.99n in revenue and earnings of $2.84/share, respectively. This was despite iPhone sales coming in lower (down 9% YoY, although Apple gave an optimistic forecast for 1Q20, saying that it expected a big holiday quarter), and as the company’s wearables and services businesses continue to grow. CEO Tim Cook described the 9% YoY decline in iPhone sales as a major “improvement” over previous quarters, which saw iPhone revenue drop by as much as 15% YoY. The rise in total revenue was partially on the back of 18% YoY growth in Apple’s services business and a 54% YoY jump in its fast-growing wearables segment, which fuelled a stronger-than-expected profit for the quarter (of $13.7bn). On the earnings call, Cooke said that outside of the iPhone, Apple’s revenue was up 17% YoY.

Total cash on hand now stands at $205.9bn (-2.2% QoQ) as the company continues its buyback strategy. Apple spent $18bn on share buybacks and $3.5bn in dividends during the quarter under review.

Looking ahead, to its all-important holiday quarter (1Q20), Apple’s forecasts came in ahead of expectations, with the firm saying that it expects $85.5bn-$89.5bn in revenue, with a midpoint of $87.5bn. This is above Refinitiv consensus analyst expectations of $86.9bn. In last year’s holiday quarter, Apple was hit by a major downturn of iPhone sales in China.

Apple sales declined in China (-2.4% YoY), Europe (-2.8% YoY) and Japan (-4.5% YoY) during the quarter. Greater China revenues came in at $11.13bn, down c. 2.4% YoY from $11.41bn in 4Q18, with declines across iPhones, iPads and the Macs categories. Interestingly, in China, Apple’s services segment grew by double digits according to Cook and the company also saw “some key gaming approvals”, while wearables are doing “so great at a company level and doing even better in China.”

Apple’s Chief Financial Officer Luca Maestri identified foreign-exchange losses as “… probably the biggest headwind that we got right now,”. He added that Apple faces a $1.1bn hit from foreign exchange woes, and a higher mix of product revenues during the holiday season will contribute to additional margin pressures. In terms of tariffs and the US/ China trade war, Cook said that he was “… very positive in terms of how things are going. And that positive view is obviously factored into our guidance as well. The tone, I think, has changed significantly,”. 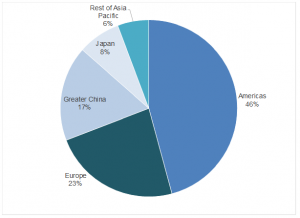 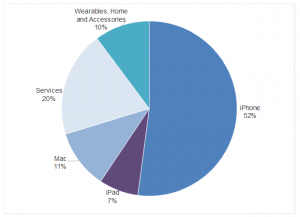 We note that Apple provided year-ago figures which have been updated to the new revenue-recognition rules that Apple adopted in its current fiscal year (FY19). In terms of its various product categories, the contributions to revenues were as follows:

iPhone (52% of revenue vs 59% in 4Q18): While Apple no longer supplies iPhone sales numbers in units, iPhone revenue was down 9% YoY at $33.4bn, but still above consensus forecasts of $32.77bn. With the lack of unit sales, we can no longer calculate the average selling price (ASP) for the products – a key metric that shed light on the rising price of iPhones. Cook did say on the earnings call that the iPhone 11 has become Apple’s best-selling iPhone since its launch in September. We note though that this likely means that the lower-priced iPhone 11 is selling more than the 11 Pro and the 11 Pro Max.

iPad (7% of revenue vs 6% in 4Q18): 4Q19 iPad sales of $4.66bn came in basically in line with consensus forecasts of $4.67bn but rose 17% YoY. On the call, Cook specifically called out the iPad Pro as a reason for the iPad segment’s outperformance.

Wearables, Home and Accessories (previously the Other segment; [10% of revenue vs 12% in 4Q18]): At $6.52bn (+54% YoY), this segment’s revenue also came in above consensus forecasts of $5.94bn and it is now growing faster than any other Apple business. In terms of wearables (Apple Watch and AirPods), the company recorded 4Q19 revenue records for wearables in every market, with Cook saying on the call that c. 75% of buyers are new to Apple Watch and he doesn’t think of the penetration “as anywhere near mature.”

Services (20% of revenue vs 16% in 4Q18): Services revenue, which includes the App Store, iTunes, Apple Music, Apple Pay, AppleCare warranties and iCloud is apple’s second-largest segment and recorded a revenue rise of 18% YoY to $12.51bn vs consensus forecasts of $12.22bn. In this segment, Apple Pay  posted an all-time record revenue for payments, with more than 3bn transactions in the quarter, exceeding PayPal transactions, and with Cook indicating that Apple Pay transactions are increasing four times as fast as PayPal (with Google Pay and Samsung Pay reportedly falling further behind). Apple will be giving users of its branded credit card, the Apple Card, no-interest financing on new iPhones. According to Maestri, Apple now has 450mn-plus paid subscriptions (+40% YoY) across Services in its platform vs c. 330mn a year ago. He added that Apple is … “well on our way to our goal of surpassing the 500mn mark during 2020.”

The Apple share price is up 5.2% from its 30 October close (prior to this results release) to Monday (4 November).