Anglo American (Anglo) listed its South African (SA) coal assets as a new company, Thungela Resources, on both the JSE and the London Stock Exchange (LSE) on Monday (7 June). Anglo shareholders will receive 1 Thungela share for every 10 Anglo shares held.

Thungela is a SA producer of thermal coal, with c. 80% of its total 2020 revenue coming from exporting thermal coal. It is important to note that Thungela is a very different investment case from a company like Exxaro, for example, which has large exposure to Eskom contracts. Thungela is much more exposed to spot thermal coal prices.

How big will Thungela be in an investment portfolios?

Thungela will be tiny. Anglo’s market cap is currently at c. R758bn (following the Thungela listing). At Thungela’s current market cap of R3bn, a shareholder with, for example, a 5% weight in Anglo coming into the spinoff, will have a negligible weight in Thungela. In our view, this means that there could be a lot of selling pressure as investors decide whether Thungela is too small to warrant keeping in their portfolios.

What is the investment outlook for Thungela? 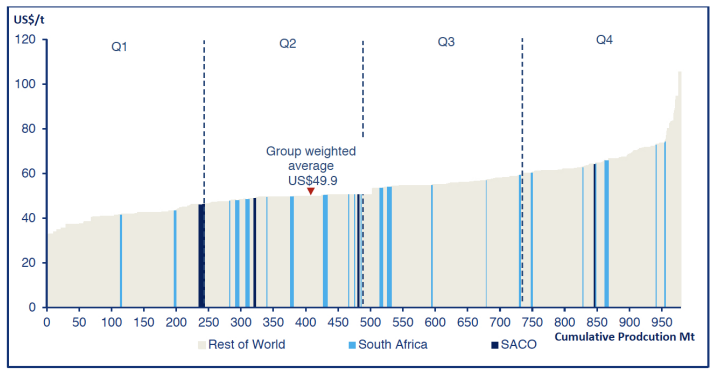 We estimate that, at a price of c. R900/tonne (i.e., at $67/tonne, which is roughly the ninetieth percentile of the cost curve and the spot exchange rate), Thungela’s assets will struggle to generate cash. Figure 2 below shows how Thungela’s earnings and free cash flow (FCF) fared over the past three years at different coal prices.

Figure 2: How Thungela’s earnings and FCF fared over the past 3 years

Thungela will list with net cash. It has gross debt of R344mn, and Anglo will inject a further R2.5bn in cash initially.  Anglo will also provide further support until the end of 2022 if rand thermal-coal prices fall below a certain threshold (in addition, Anglo will provide sales and marketing support for the next 3.5 years). Thungela intends to pay at least 30% of what is essentially FCF on a semi-annual basis.

How important is SA thermal coal to Anglo’s profitability?

SA thermal coal is not a large contributor to Anglo’s profitability. In 2020, SA thermal coal generated c. US$1.1bn in revenue (<4% of Anglo’s total Group revenue) and a US$62mn EBITDA loss at a free-on-board (FOB) cost of US$51/tonne (similar unit costs are expected going forward). Anglo has thermal coal assets in SA and Colombia and metallurgical (met) coal assets in Australia. These assets are grouped together and disclosed as coal in Figure 3 below. Given the small size of these assets, we do not believe Monday’s Thungela spinoff makes a major difference to the outlook for Anglo.

Points relating to climate change that investors should keep in mind

Figure 4: How much greenhouse gases are emitted by the things we do?

In his book entitled, How to Avoid a Climate Disaster: The Solutions We Have and the Breakthroughs We Need, Bill Gates argues that reducing emissions from power generation is a huge focus for two reasons. First, it is one of the biggest contributors to global emissions (see the table in Figure 4 above) and second, figuring out how to get low-carbon power will help the world decarbonise many other things we do, including manufacturing, transport, etc.

In addition, coal is responsible for the most deaths per unit of electricity out of all energy sources, as shown in Figure 5 below.

Figure 5: Deaths per unit of electricity by energy source 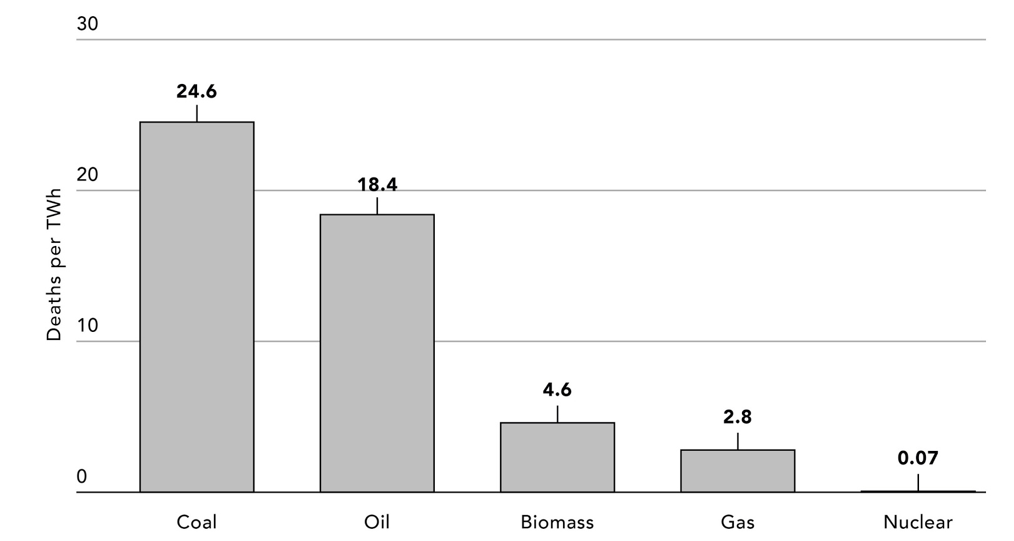 So, there is clearly a need to move away from fossil fuels such as thermal coal. However, such transitions can take time and Figure 6 below highlights the time it took historically for the world to transition to new energy sources. 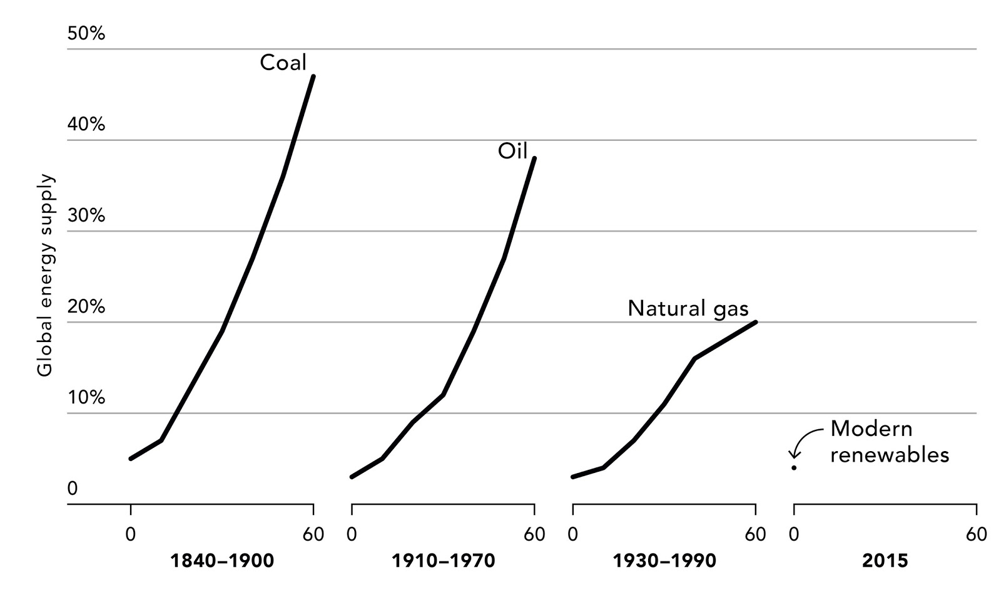 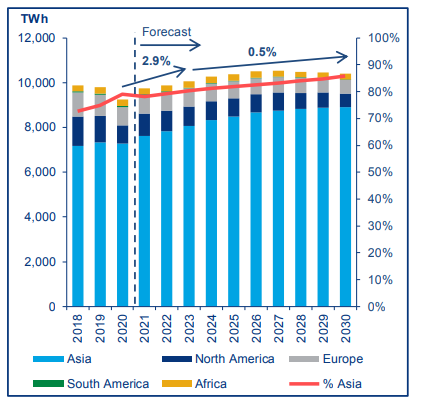 Major economies in the region, like China and India, have become big consumers of thermal coal over time (nearly half of all SA thermal coal exports went to India last year). Thermal coal stood at over 60% of India and China’s respective energy mixes in 2020. This can also be seen in their annual emissions over the past three decades (see Figure 8). 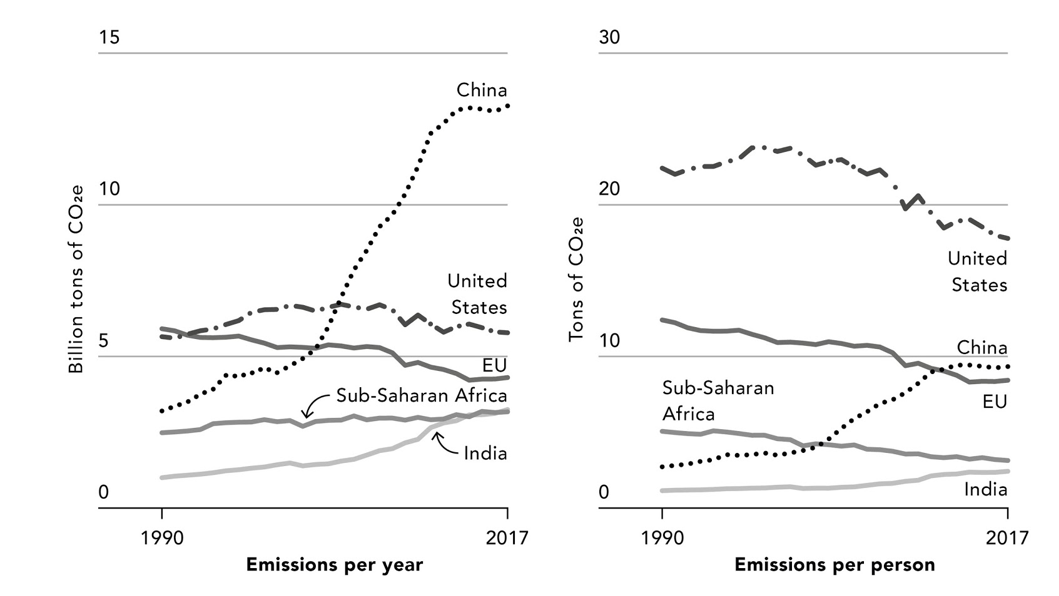 At the end of its first trading day Thungela closed at R21.90/share and with a R3bn market cap. This valuation appears cheap when compared to the earnings that the company may generate at thermal coal’s currently elevated prices. We remain cautious, however, of Thungela’s ability to generate cash if thermal coal prices correct back towards levels seen over the 2019-2020 period. Given the small size that the share will represent in investment portfolios following its spinoff from Anglo and environmental, social and governance (ESG) concerns that many investors will have, short-term selling pressure is expected. We will continue to evaluate the investment case if this selling pressure does materialise.