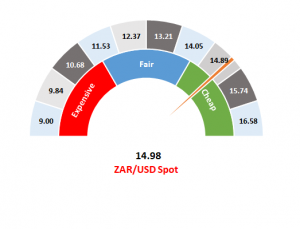 The South African (SA) rand was trading at around R14.98/$1 on Thursday morning (26 September), which is actually stronger than the rate of R15.18/$1 where the local currency was trading at the beginning of the month.

A recovery during the first half of September was primarily in response to improving prospects for a trade deal between the US and China. However, this past week or so has seen the rand come under pressure as it would appear that trade tensions between the US and China have begun to escalate once again. In a speech at the annual United Nations General Assembly (UNGA) in New York, US President Donald Trump again criticised China’s trade practices and said he would not accept a ‘bad deal’ in the ongoing negotiations between the two superpowers. China retorted by saying that it had no intention to “play the Game of Thrones on the world stage” and warned Washington to respect its sovereignty.

While this drags on, there is the very real prospect that Trump might be the third US president to be impeached. Bearing in mind that both of the previous presidents that faced impeachment were able to remain in office, we don’t believe that this will have a massive near-term impact.

Meanwhile, British Prime Minister Boris Johnson continues to find himself hamstrung by parliament which will neither call a new election, nor give Johnson the freedom to manage the Brexit deal as he sees appropriate. Effectively, Brexit is stalled by the parliamentary process and the most likely outcome is that the UK is forced to ask for another delay – this time in order to hold a national election. Initial polls indicate that an election most likely faces a hung parliament, bringing the country no closer to a Brexit resolution.

Domestically, the news is also disappointing. According to the South African Reserve Bank’s (SARB’s) Quarterly Bulletin, which was released on Wednesday (25 September), the local economy remains stuck in its longest downward cycle since 1945. The economy entered the 70th month of a weakening cycle in September. In addition, a banking strike, which is planned for Friday (27 September), followed by a possible private security sector employee strike will do the economy no favours. It also appears that value-added tax (VAT) and company tax collection has declined, notwithstanding the 1% VAT hike which was implemented in 2018. The government is increasingly strapped for cash and was forced to borrow R75bn in international markets in order to maintain itself.

Finance Minister Tito Mboweni has also delayed his medium-term budget policy statement (MTBPS) to 30 October, about a week later than is the norm. While we might not know what he is going to say, we do know that it isn’t going to be pretty. Our government is cash hungry and, while recent policies have focused on spending more cash by way of the proposed National Health Insurance (NHI) and other social programmes, little has been said about growing the economy. Tax rates are high and rate increases are unlikely to result in higher tax collection (just look at the decline in VAT collections despite the 1% hike in the VAT rate). The government is also unable to borrow at a much faster rate than the R1bn of debt it is accumulating every day and prescribed assets is a wonderful way to crash our economy and tax-base even harder.

Eskom remains a problem, although it is not our only problem. The plan to fix Eskom is workable, albeit slow. We continue to believe that government should put Eskom into a form of business rescue that allows it to raise secured debt in order to finance its operations, while it deals with legacy issues. It is increasingly clear to us that Eskom cannot come out of the rescue process with the same business model as it went in. We need to see a modernised business model and an ability to work with the private sector. Much of SA’s infrastructure is also dilapidated and in need of repair. The fastest and easiest way to kick-start our economy is to allow the private sector to partner with government in fixing this mess. The private sector stands ready to help with cash, expertise and passion. If society is the interplay of labour, government and private investment, then now is the time for government and labour to allow all three a seat at the table to rebuild our country.

With the rand at R14.98/$1, it is on the cheap side of our ranges. Unfortunately, we see very little being done that will bring a near-term recovery to the beleaguered currency. 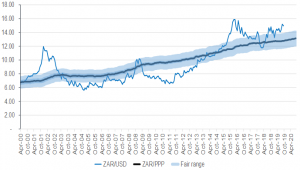