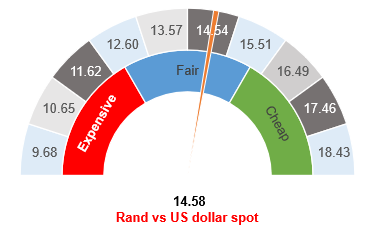 On Tuesday morning (31 August), the rand was trading at R14.58/US$1 – a couple of cents stronger than on 11 August, at the time of our previous rand view note entitled Anchor rand view: A new finance minister and future US tapering weigh on the rand. The currency has been behaving well in August and, although we saw a brief period where fears of policy action by the US Federal Reserve (Fed) pushed the local unit to above R15.00/US$1, the rand has remained resilient.

US policymakers attended the annual Jackson Hole Economic Symposium, which took place on 27 August, via Zoom this year. The Jackson Hole Economic Symposium is hosted by the Kansas City Fed with dozens of central bankers, policymakers, academics, and economists from around the world attending. Participants convene to discuss the economic issues, implications, and policy options pertaining to the symposium topic. At this year’s event, it seemed that the participants were engaging in efforts to talk bond yields lower, pointing out that interest rate hikes are many years away, while the Fed is preparing the market for a slowdown of its bond purchasing programme. The market seems to be buying into the lower-for-longer interest rate narrative, even though the taper of bond purchases is expected to start in the next couple of months. This means that we have seen bonds a little stronger, the US dollar slightly weaker and the rand a little stronger in response to what the US Fed is saying.

Domestically, we highlight that South Africa’s (SA’s) CPI inflation appears to be on a downward trend, with the three most recent prints being 5.2%, 4.9%, and 4.6% YoY. This gives some credence to the view that the inflation spike was temporary and that the SA Reserve Bank (SARB) can be patient regarding rate hikes for the local economy. Perhaps it is more telling that US CPI was last measured at 5.4% YoY. If you subscribe to a purchasing power parity (PPP) model (as Anchor does), then the fact that inflation is higher in the US than in SA means that your model is currently showing that the rand should structurally strengthen against the US dollar for the next couple of months.

The SA Department of Social Development also recently published a Green Paper entitled Comprehensive Social Security and Retirement Reform, with the proposals contained therein a bastion of socialist thinking and seeded in a deep desire for a controlled economy. Unfortunately, these proposals also lacked any foundations in economic reality or practical workability. The desire to nationalise most of the asset management industry and to expropriate most pension fund savings remains a delightful thought for the minister in question. Unfortunately, SA’s middle class is tiring of the abuse at the hands of government, and this latest salvo served to confirm the view that one should seriously consider emigration, financial emigration, and moving one’s tax base abroad. Another own goal from government, so to speak.

The tragedy is that this own goal takes place against a backdrop of several positive events in the country. People are just beginning to believe that Eskom might be able to dig itself out of the hole that it created. The new finance minister (Enoch Godongwana) has been doing all he can to communicate that the SA fiscal plan is unchanged. The direction of policy remains the same, just with a different finance minister driving the process. The domestic GDP numbers have been rebased (which is quite a normal occurrence every couple of years), and our economy is 10% larger than we thought. That means that our debt-to-GDP number will likely be at around 71% at the time of our Medium Term Budget Policy Statement (MTBPS), which is expected to take place on 2 November. Overall, things are less dire than we thought. Nevertheless, we note that SA’s debt remains unsustainable, and that policy slippage still has the potential to imperil the country’s recovery. It’s not just about the debt-to-GDP ratio. The government also published the rules allowing for self-generation of power (which should take some pressure off Eskom). There were issues with the initial rules and business complained. The government heard these complaints and responded with amendments to the rules – business and government moving closer together are what SA needs. We are pleased to see that Transnet will be open to working with the private sector as well.

The currency continues to take direction from global developments and where the US Fed goes the rand is sure to follow. We continue to expect a little volatility as the tapering of bond purchases becomes real. However, once the dust settles and calm returns, we would anticipate that the local unit will be trading close to our fair range of R14.50-R15.00/US$1. 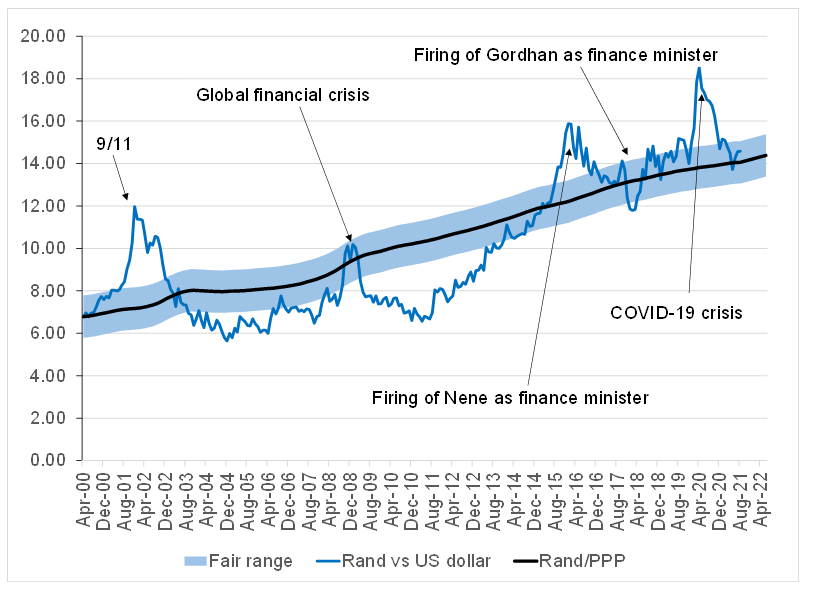