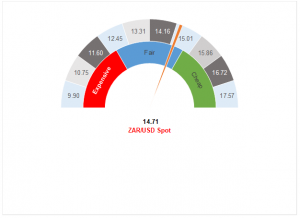 It has been quite an adventurous week for the rand, with the disappointment around Public Enterprises Minister Pravin Gordhan’s special paper outlining the proposed future path of Eskom to the horror of Finance Minister Tito Mboweni’s Medium Term Budget Policy Statement (MTBPS) both putting the local currency under considerable pressure. We saw the currency weaken to R15.17/$1 in short order. However, a temporary stay of execution from Moody’s on Friday evening (1 November) seems to have allayed some of the market’s fears, thus allowing the currency to recover a little bit of lost ground. The rand is currently (5 November) trading at around R14.71/$1, which is within our fair band range.

South Africa’s (SA’s) fiscal position is dire and the message from our finance minister could not have been more clear – if we continue down this current path, then we are about a decade away from becoming another Zimbabwe. The SA government is now left with very few options to address the massive imbalance and all of the choices that need to be made will be unpopular with the ruling party, its alliance partners and the SA population in general. We no longer have the luxury of kicking the can down the road and any delay in making the necessary decisions will only result in the medicine being even more bitter when we eventually have to take it.

In many ways, SA is fortunate that global markets are in a forgiving mood. The risk-on trade is seeing all-time highs in US equity markets, while emerging market currencies and other risk assets are benefitting. This positive global sentiment has clearly also been giving the rand some support.

In considering the difficult path that lies ahead for SA, we have been shifting our portfolios to include a greater exposure to non-resident assets and we have also been increasing our US dollar exposure while the rand is within our fair range. 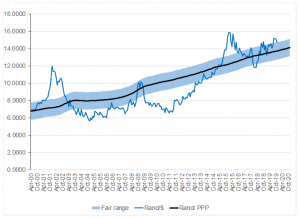