Anchor rand view: Rand trading at its best levels vs the dollar since early 2018 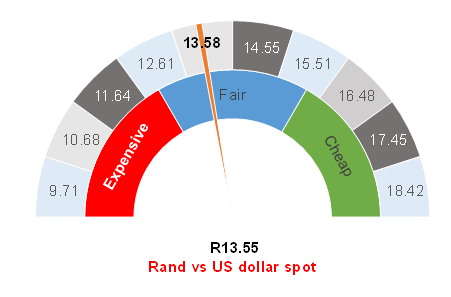 The rand pushed below R13.60/US$1 on Wednesday (2 June). At that level, it triggered several stop losses, firming further to R13.50/US$1 in New York trade. It has since settled back to c. R13.55/US$1 on Thursday (3 June) morning, while we await the US May employment (non-farm payrolls) report scheduled for release on Friday (4 June). Non-farm payrolls measures the change in Americans employed during May, excluding the farming sector, with a high-than-expected reading likely to be bullish for the greenback and vice versa. The sharp strength in the local currency has occurred in the absence of any meaningful new information for the market and the rand’s performance has analysts and market commentators searching for reasons. The political interference with the central bank in Turkey is mooted as one possibility, resulting in investors downweighting Turkey and upweighting South Africa (SA). Turkey President Recep Tayyip Erdogan this week sent the Turkish lira plummeting to new all-time lows after calling for interest rate cuts over the next two months and saying that he had spoken to the country’s central bank governor about it.

Similarly, the positive global economic growth story is emboldening carry traders, while bond yields appear to have found their trading range, for now. Perhaps it is just our high domestic interest rates which make the rand attractive as the cost of holding dollars, rather than rand, is about 0.5% per month, which is a meaningful number for carry traders.

Our view is that the backdrop of a supportive commodity cycle and global positivity towards economic growth is pushing the rand stronger than our fair-value range. Our fair range of R14.50-R15.00/US$1 seems some way off at present and it is feeling more improbable to us that the rand will weaken to that level, at least in the near term. Certainly, the rand is one of the world’s most volatile currencies and, at some point, it will trade within our fair range once again. SA also set a record trade surplus of R52.5bn in March (it was slightly down in April at R51bn but still higher than consensus expectations of R37.5bn) and, for as long as net exports mean that foreigners need to buy R50bn of rand currency each month, the local unit will continue to be supported.

Nevertheless, we reiterate our view that this is a good time to externalise some of your balance sheet and investments if you have not already done so. We are gradually reducing some of the currency hedges in our portfolios to take advantage of the firmer rand. We also note that the commodity cycle of the early 2000s kept the rand stronger than our fair line for 5 years, while the currency was also stronger than our fair line for 6 years after the 2008 global financial crisis. It makes a lot of sense to diversify your balance sheet and invest abroad, after all SA comes with its own set of precarious risks and there are, quite frankly, more diverse opportunities offshore. Having all your assets in SA does not make sense. However, when externalising investments, we also need to be cognizant of the fact that we should not count on rand weakness for returns. The next bout of rand weakness might be many years out, or perhaps not. 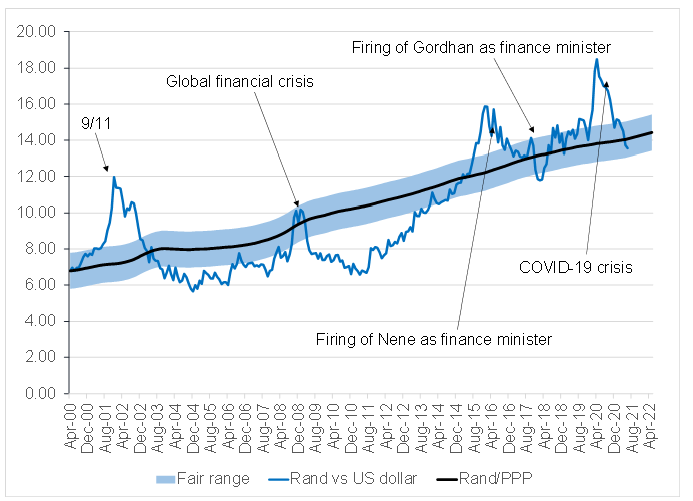