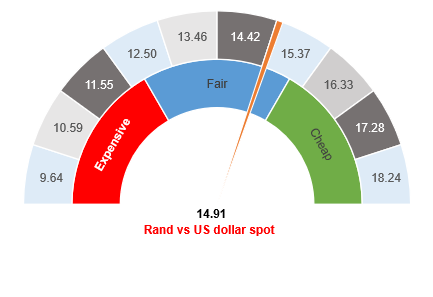 South Africa’s (SA’s) 3Q20 GDP data were released on 8 December 2020. These numbers were better than anticipated and showed that the local economy’s recovery from the lockdown has been a little stronger than people were forecasting. This bolstered the rand, which recovered to trade at R14.91/US$1 overnight. The GDP data still show that the SA economy is c. 6% smaller than it was a year ago, however, it is the improvement in the data which has given the rand hope.

The remainder of this week promises to be action packed. We are expecting SA’s latest trade and current account data to be released on Thursday (10 December). The terms of trade continue to be in SA’s favour, with hard commodity prices (iron ore in particular) being stronger than we had been expecting. A positive surprise from these numbers is therefore certainly possible. The European Central Bank (ECB) will also be meeting on Thursday and the market is broadly expecting some form of increased stimulus. We expect that such a stimulus announcement will provide further support for the rotation towards cyclical emerging market (EM) currencies. The nature and size of the stimulus package is important, however, we think that the rand might prove to be a beneficiary of the ECB’s announcements.

The global environment continues to support a gradual weakening of the dollar against cyclical currencies as the vaccine becomes available and investors position for a cyclical recovery. We also note that the sheer numbers of infections in the US dwarfs those in Europe at the moment. So, even with a vaccine, the likelihood is that Europe (and therefore also the euro) will lead the recovery vs the US (and the dollar). For now, the weaker dollar trend continues to have some momentum behind it. We maintain our view that dollar weakness will be limited, although a further 3% to 8% weakness in the greenback is certainly plausible.

With the rand trading at around R14.91/US$1, it is within our fair range as per both Figure 1 and Figure 2. This strengthening trend is more than likely to continue for a little while longer and we are therefore maintaining our currency hedges while looking for opportunities to buy back some of the US dollars that we sold at higher levels. 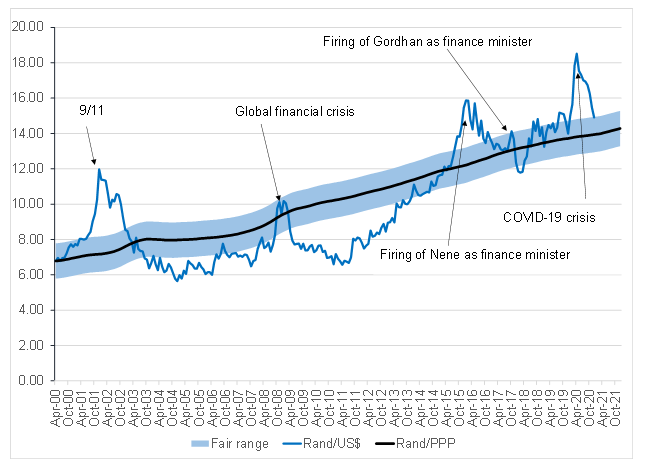 The resilience and future of African financial markets amid COVID-19

Anchor fixed income update: A look at the 2021 global and SA environment