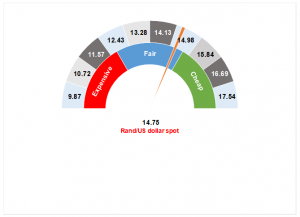 The rand has been rather range-bound in the last few weeks, trading between R14.75 and R15.00/$1. Global newsflow has been supportive as the market anticipates some resolution to the US/China trade war. For now, trade negotiations seem to be going well with US President Donald Trump telling reporters that the parties are; “in the final throes of a very important deal.” That being said, we are getting close to the all-important 15 December deadline, when the US will have to decide on whether or not to carry out its threat of further tariffs on Chinese goods. However, at present, the market seems to be taking a positive view of the negotiations, but anything is possible.

Against this positive global backdrop, the rand has been relatively steady as disappointments continue to pile up on the domestic front. First and foremost, the horrific news contained in Finance Minister Tito Mboweni’s October Medium Term Budget Policy Statement (MTBPS) or mini-budget continues to weigh on the local currency. Markets are increasingly of the view that South Africa (SA) will lose its last investment grade rating during 2020 (Moody’s is the only ratings agency to maintain an investment-grade rating on the country). This will likely create market turmoil and may well see the rand materially weaker against the greenback for a period. Concerns around these risks were effectively the reason why the SA Reserve Bank’s Monetary Policy Committee (MPC) decided not to cut interest rates at its meeting on 21 November. Consumers are suffering under high interest rates directly as a result of the fiscal catastrophe brought on by government’s inaction to make the tough decisions which are best for the country.

The IMF weighed in this week as well, stating clearly that SA is on a path to ruin and that the current policy mix is stifling investment and job creation. Meanwhile, ratings agency Standard & Poor’s (S&P) on Friday (22 November) announced that it has put SA on negative watch for a further downgrade deeper into junk. S&P highlighted Eskom in its outlook statement, noting that the state-owned power utility will likely be an lasting drain on fiscal resources.

It seems to us that the rand can be thankful for a generally forgiving global environment as the domestic news continues to depress.

The rand is currently trading within our fair range. We have been taking the opportunity to increase our exposure to offshore assets as the risk is skewed towards further rand weakness in 1Q20. 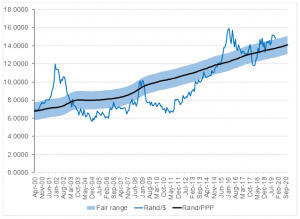