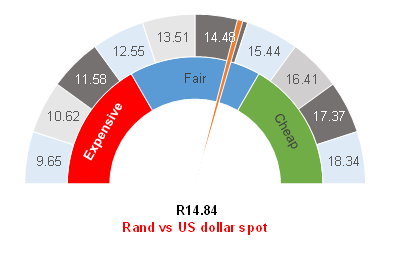 It has been an action-packed few days for the local currency, with the rand trading at around R14.85/US$1 on Wednesday morning (24 March). The unexpected news over the weekend was that Turkey’s President Recep Tayyip Erdogan had fired his central bank governor after only four months in office, following the latter instituting a surprise interest rate hike of 2%. This move has roiled emerging markets (EMs), with the Turkish lira losing about 15% of its value before clawing back some of these losses. Fortunately, we have seen surprisingly little spillover effects on the rand, which remains stronger than it was at the beginning of March.

Unfortunately, the noise this has caused in EMs has kept investors cautious and there was limited appetite for bonds at the South African (SA) government’s bond auction on 23 March. We ascribe this to the long weekend in SA and concerns around the situation in Turkey keeping investors away. As a result, we have seen the SA government announce reduced bond issuances going forward (as we have been expecting). This has reversed much of the impact on the rand, and we see it as a positive step.

We are now waiting for the SA Reserve Bank’s (SARB’s) Monetary Policy Committee (MPC) interest rate announcement on 25 March. Along with most market participants, we expect the repo rate will be unchanged. The markets are, however, pricing in two rate hikes later this year and will likely be looking for some signaling from the MPC that rate hikes might be on the cards later in 2021. In our view, the MPC will need to strike a cautious balance of keeping possible hikes on the table, while not rattling bond markets unnecessarily. There is also the risk that a less hawkish stance from the MPC might even see the rand lose a little value.

Nevertheless, overall, we retain our view that the rand will remain well supported and we believe that our target range of R14.50 to R15.00 vs the US dollar will hold for the next while. We note though that the positive factors for the rand are slowly losing their strength and there is a risk that our fair range might shift a little weaker towards the end of 2021.

We see the rand as fair at the moment and we are slightly underweight the US dollar in our portfolios. We are currently maintaining our positions and are neither increasing nor reducing our currency exposures at current levels. 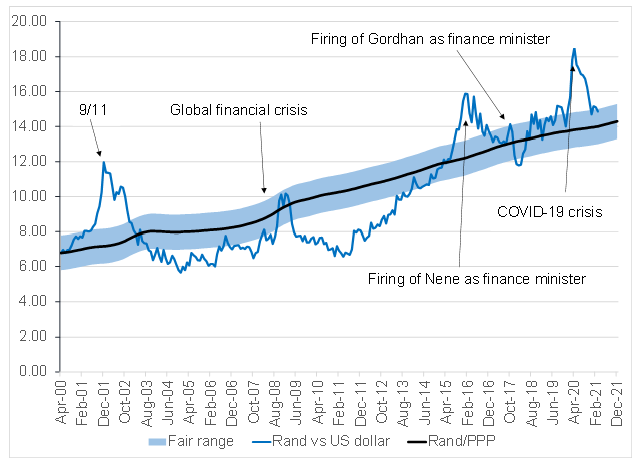