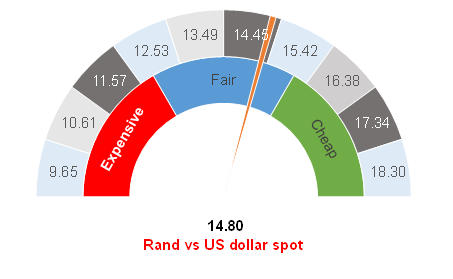 The rand was trading at R14.80/US$1 on Tuesday morning (9 February). Volatility has been the order of the day recently, with the local currency pushing to R15.53/US$1 and back down to R14.80/US$1 in the past few weeks. Jitters over the South African (SA) variant of COVID-19 and the ineffectiveness of some vaccines, nervousness around the size and shape of the US stimulus package, and anxiety over the SA State of the Nation Address (SONA), scheduled for Thursday (11 February) at 7PM, and Finance Minister Tito Mboweni’s upcoming National Budget speech (24 February), have all been fuelling the volatility of late.

It seems that the US is gradually pulling its next stimulus package together and that this will likely pass the approval process in the coming weeks. Hopes for stimulus are high and this is encouraging demand for risk assets and supporting the rand. At the same time, SA’s December tax collection data, which National Treasury released this week, were a positive surprise. YTD, the expectation was that tax collection would be about 17% lower than last year. Instead, it was only 10% lower. While still not a good outcome, it is clearly less catastrophic than what was originally expected. This has fuelled hopes for some positive surprises in the National Budget. The combination of higher tax collection and more successful bond issuances than originally anticipated means that National Treasury has raised just under R100bn more than it needs. This is an immense amount of money and could alleviate 40% of Eskom’s excess debt if National Treasury chose to allocate it as such in the budget. However, instead we think that will give Mboweni some flexibility to pay for vaccines (assuming we can ascertain their effectiveness), and the option to borrow less next year. This news has been received rather positively by the market.

Looking to the future, we think that the market has become a little too positive on the outlook for the budget and on the effects of stimulus measures that the SA government intends to implement. In the near term, it is plausible that the rand will give up some of its gains. In the longer term, our fair range of R14.50-R15.00/US$1 continues to hold. We are neutral on the US dollar at the moment and we can easily make a case for rand weakness (based on SA’s fragile economic situation) or rand strength (based on a cyclical dollar weakness trend that is likely to persist for the remainder of 2021). However, for now, we are not changing our positions and we are retaining our current exposures to the rand and the US dollar. 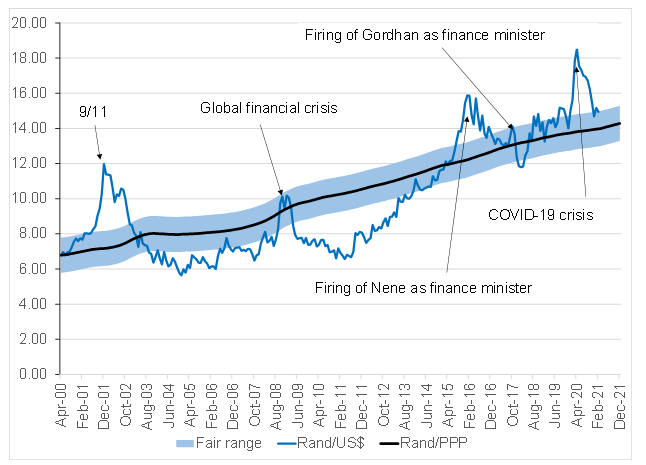