Pfizer surprised markets on Monday (9 November) by announcing that it was closer to a COVID-19 vaccine than people had realised. In trials, Pfizer and BioNTech’s vaccine had shown a more than 90% effectiveness in preventing COVID-19 infections – the most encouraging advance yet in the fight against the virus. This announcement means that the world might soon have a new weapon in managing the worst pandemic in over a century. Pfizer’s announcement was more good news for a market that was already jubilant after Joe Biden’s victory in the US Presidential Election. The rand immediately overshot to c. R15.25/US$1 and, by Tuesday morning (10 November), the local unit had settled at a level of around R15.47/US$1. Like many others, Anchor was surprised by Pfizer’s announcement and we find ourselves asking the question – now what? A vaccine is clearly a game-changer and provides more support for risk assets and emerging markets (EMs).

We take a fundamental view of the rand which is now trading in the upper band of our fair-range expectation as can be seen from our rand gauge in Figure 2 below. This is a stark recovery from the local currency’s oversold position in 1Q20. Our purchasing power parity (PPP) chart in Figure 2 below also indicates that the rand is still on the cheap side of fair. We expect the current economic situation in South Africa (SA) to keep the rand a little above our fair line (the black line in the chart). However, we also believe that there is still some scope for the rand to move into the blue band around our fair-value line, but we expect that the rand’s moves will be smaller from here, with a broadly sideways trend and possibly slight strength as our base case.

There is still significant volatility around the rand. We could make a case for a stronger rand; a Biden presidency will probably produce some stimulus measures early next year which is rand-positive, as SA is still generating strong trade surpluses, which will also support the local currency. Traditionally, these trade surpluses grow into the December period, giving more support to the rand over the festive season. Government is clearly making some progress in its discussions with labour unions, which could prove to be significantly supportive of the currency. Any traction on President Cyril Ramaphosa’s economic recovery plan will also be positive for the local unit. The orthodox economic policies being adopted by government will continue to slow the long-term depreciation of the rand, with inflation likely to remain towards the bottom-end of the SA Reserve Bank’s (SARB’s) target range of 3% to 6%.

Conversely, we could argue that the rand has moved a lot and that SA’s fiscal situation is still a problem. The combination of domestic politics and a stuck-in-the-mud economy will limit further rand strength and could even see the local unit weaken.

In our view, the near-term outlook will be random, though a broadly stable rand in a volatile environment is the most likely outcome. We expect to counterbalance our underweight US dollar currency position back towards neutral levels, although we believe that it is still too early to take an overweight position on the US dollar. 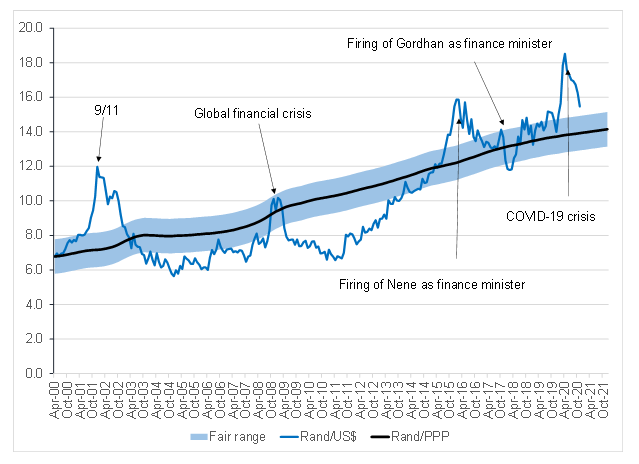