Figure 1: Rand vs US dollar gauge: 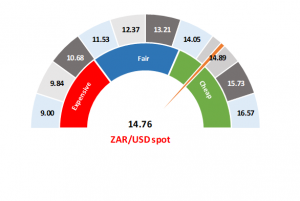 Last week, Statistics SA announced that South Africa’s (SA’s) economy had grown by a higher-than-expected 3.1% (QoQ, annualised) in 2Q19 (Bloomberg consensus forecasts had expected a 2.5% increase). YoY growth at 0.9% also exceeded expectations. This was clearly a bounce back from the Eskom-induced contraction of the previous quarter (1Q19). Nevertheless, it was enough to give domestic bonds and the rand (which had both been under pressure) a brief respite. Meanwhile, in the UK, Britons seem to have taken a “no-deal” Brexit off the table – maybe? Again, this is seen as a positive development for risk assets, giving a little more support to the rand, with foreign buying of local bonds turning positive once again.

While we have seen some benefit from a few specific events, the world continues to be an uncertain place, with protests in Hong Kong and SA making headlines. The next round of trade talks between the US and China (scheduled for October) are likely to give markets direction once again. However, in the near term, this week’s European Central Bank (ECB) meeting which takes place on Thursday (12 September) will be key for the rand’s prospects. We are expecting some form of a stimulus package to be announced but the question remains whether the package that is eventually delivered will satisfy markets.

The aforementioned recent good news has seen the rand recover to R14.76 vs the US dollar. However, this remains outside of our fair-band range, making the rand look slightly cheap. We are not taking positions at the moment, having reduced our US dollar holdings above R15.00/$1. We will wait for the rand to move back into our fair-band range in order to externalise some cash again. 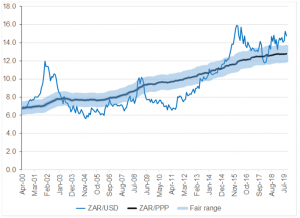