Anchor rand view: A confluence of factors provides support to the rand 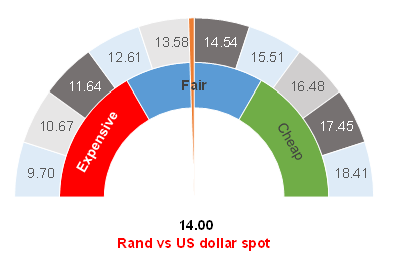 The US announced weaker-than-expected job numbers last week, with the Bureau of Labor Statistics reporting only 266,000 new jobs in April – c. 25% of the median consensus forecast of 1mn new jobs. This fuelled a bout of US dollar weakness, leaving the South African (SA) rand bouncing along at around R14.00/US$1. Recent media reports have also been making a lot of noise about the rand being the world’s strongest currency over the past twelve months, although we note that much of the reason for this has to do with the local currency’s recovery from its excessive sell-off through the COVID-19 crisis last year. The US economic growth rate is expected to peak in 2Q21, while other regions (for example, Europe) have been slower to unlock and vaccinate, which means that their peak growth rates will be a little later. Investors looking to capture the benefits from the unlock rally are thus shifting away from the US towards these other regions and this is expected to keep the US dollar on the back foot for much of 2Q21 and 3Q21. We also think that the recent higher-than-expected US inflation number will act as a speed bump towards US dollar weakness later this quarter.

In addition, commodity prices have continued to rally on the back of global demand being driven by the ongoing economic recovery from the pandemic, with iron ore and certain platinum group metals’ (PGMs’) prices benefitting SA. For March, SA posted a record trade surplus which widened to R52.77bn (or c. US$3.67bn) vs a revised February surplus of R31.22bn, again lending support to the local unit. In contrast to our expectation of a slowdown in the commodity cycle, the cycle appears to be accelerating and this is providing significant positive support to the rand. As long as this positive commodity cycle momentum persists, our expectations favour a stronger rand.

Moody’s also skipped its review of SA’s credit rating (currently at Ba2 – two rungs below investment grade) on Friday (7 May), instead pushing the review out to November. National Treasury is benefitting from a windfall gain in taxes, which is improving the country’s likely debt outcomes. It remains to be seen whether some of this will be spent on a wage deal though, overall, SA is currently in a far stronger position than we had expected. Global investors are also likely to react positively to the more assertive President Cyril Ramaphosa that we have seen of late. Overall, the global yield sell-off has prevented foreigners from buying significant quantities of our bonds. However, SA bonds are cheap and there is every reason to believe that they will, in time, find favour with investors once again.

Anchor applies a purchasing power parity (PPP) model to determine our fair value exchange rate for the rand (see Figure 2). At R14.00/US$1 on 12 May 2021, the rand is in the bottom half of our table – being slightly stronger than the midpoint of our PPP range. Looking ahead, we maintain our view that a R14.50-R15.00/US$1 exchange rate is a reasonable range for the local currency. The current confluence of the three abovementioned factors also means that the pressure on the rand is to trade stronger than our implied fair range over the near term. It appears to us that the rand is poised to break convincingly stronger than R14.00/US$1 at some point. In the long run, we believe that this is a good level at which to externalise some wealth, although we also expect that the rand may remain stronger than our fair value for a protracted period. 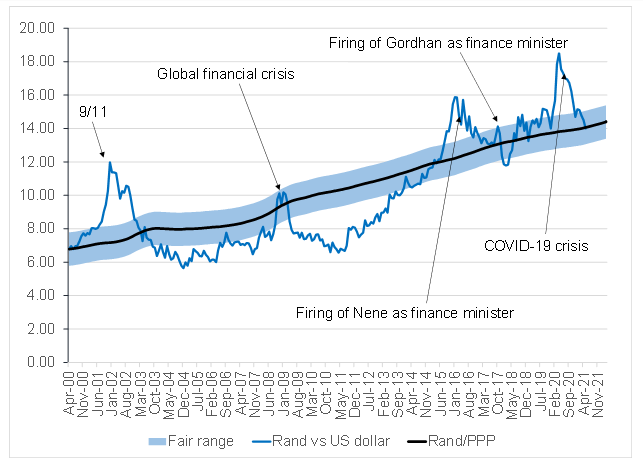