Since 2016, the South African (SA) wine industry has been working through a period of consolidation and restructuring amidst a difficult external operating environment. Over the 10-year period from 2005 to 2015, local wine production grew rapidly. Unfortunately, growth in both domestic consumption and in exports was limited, resulting in a period of stock accumulation, declining real prices and a general lack of competitiveness relative to alternative horticultural products. The result was a contraction of the industry from 2016 to 2018, both in terms of the national vineyard size and wine production volumes. This was further exacerbated by a severe, three-year long drought in the Western Cape, as well as a difficult consumer environment, where spending power dwindled as a result of SA’s limited economic growth. Following a tough 2018, in 2019 SA wine exports continued to struggle. The overall value of exports declined by 7% YoY to R8.5bn, while the total volume of exports went down by a sizeable 24% YoY to 320mn litres.

The wine industry’s continued decline in 2019, both in terms of the value and the volume of local wine exports, largely correlates to the downturn in overall wine production due to the drought. Whilst SA’s main production hub (the Western Cape) had a slightly more favourable rainy season in 2018 compared to the three prior years, vines were still struggling to recover with yields coming in lower than in previous years.

Interestingly, those product ranges that showed distinctive growth were in the premium and super-premium ranges – correlating directly to the Wines of South Africa strategy to work towards a premiumisation of SA wine. Packaged wine exports declined by a mere 4% YoY in value compared to the 14% YoY decline in volume to 145mn litres. Bulk wine exports fell by 30% YoY in volume terms, but the 17% YoY decline in value indicates that higher prices were fetched for these exports.

The UK remains SA’s largest export market, both in terms of value and volume, followed by Germany and the Netherlands. However, 2019 recorded YoY wine export declines to China, Africa, Sweden, and Germany, while exports to the US remained flat. With regards to the top-rated varietals, in 2019 white wine remained the firm favourite in export markets with Sauvignon Blanc leading the pack in terms of volume. Chenin Blanc and Chardonnay both recorded positive value increases of 14% YoY. Positive prices for SA Cap Classique and Sparkling Wine categories are also worth mentioning. 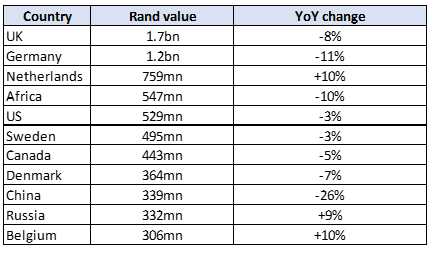 According to the SA wine industry’s annual Wine Harvest Report 2020, this year’s wine grape crop is set to bring a high-quality vintage to consumers, following favourable conditions throughout the season. The 2020 wine grape crop is estimated at 1.35mn tonnes, representing an 8.2% YoY increase, according to the latest estimate (dated 24 April 2020), from industry body, the South African Wine Industry Information and Systems (SAWIS). The Stellenbosch, Swartland, Cape South Coast, Paarl and Breedekloof regions all harvested a larger crop than in 2019, with the Olifants River Valley region almost returning to its normal production levels after being one of the regions hardest hit by the recent drought. The Klein Karoo region is still struggling with the ongoing drought, which was also experienced in certain parts of the Robertson region, while frost damage resulted in significant crop losses in the Northern Cape.

Sadly, for the industry, with the advent of the nationwide lockdown, the positive momentum gained by the larger, high-quality harvest has since been eroded. SA is the only country in the world to stop wine exports due to lockdown measures. With roughly half of SA’s wine production exported on an annual basis, the ramifications are being felt throughout the industry. Further compounding the situation is the uncertainty plaguing the industry because of the government backtracking on regulations regarding liquor exports. Under stage 4 of the national lockdown, government initially lifted the ban on exports, only to do a U-turn a few days later. This resulted in major disruption and congestions at the country’s ports, as wine exporters rushed to get their products out of the country. Wine sales are currently booming in Europe and the US, but without the export option under stage 5 and 4 of the lockdown, local wine producers have been forced to sit back and watch hard-fought for shelf space diminish, contracts lost and orders not being filled.

Whilst under stage 3 liquor sales are seemingly set to resume, the industry has already suffered significant damage. An estimated R2bn worth of sales were lost in April alone, however the full costs of the damage wrought by the lockdown will take some time to calculate. Furthermore, the backlogs at the country’s ports will take weeks, if not months, to clear. In addition, it is important to remember that most wineries in SA rely on more than export and local sales to earn an income and with restaurants and holiday accommodation shut for the foreseeable future, the impact on SA’s booming wine tourism sector is only beginning. Around 80% of the 600 wineries in the Western Cape are small, medium, and micro-enterprises (SMMEs), the majority of which are wholly dependent on local sales and wine tourism.

The question now is what will the future hold for SA’s wine industry, especially given that social distancing will be the ‘new normal’ for the foreseeable future? For the immediate future – and possibly even the medium term – tourism globally will have a more domestic approach. Thus, SA wineries are already developing varied offerings that accommodate different price points and interests for all South Africans to take advantage of any local demand. With COVID-19 induced pressure on consumers’ disposable incomes, wineries will need to carefully consider their pricing structures and make more affordable offerings available. Furthermore, for the SA wine industry ‘going digital’ is now non-negotiable, although we believe that this increasingly digital-reliant future involves far more than setting up a simple e-commerce store but is indeed about a new way of thinking and marketing their products.