There have been several media reports recently regarding disruptions in global meat markets, most notably in the US beef market. Canada, Brazil, the US and Ireland continue to report closures of meat-processing plants because of COVID-19 infections. In the US, Ireland, and Canada, it is mainly beef and pork processing plants being affected, whilst in Brazil the closures are also impacting poultry-related processing plants. Given the significant market share of these countries in the global meat trade (33%), if these processing plant closures spread and they remain closed for a prolonged period, there are fears of a global meat shortage and, potentially, an uptick in prices. The US, Canada and Ireland are amongst the top-ten world beef exporters (as well as pork in the case of Canada and the US). In poultry, Brazil is the leading exporter, followed by the US, Poland, the Netherlands, and Germany.

With regards to beef and South Africa (SA), we note that from around 2014, SA has fortunately remained a net exporter of beef. Thus, from a food security perspective, the closures of certain plants in key exporting countries presents minimal risk to us. From an export perspective, trade without our key partners remains on solid footing. Major markets for fresh/chilled beef include regional markets (Mozambique and Eswatini/Swaziland), as well as Middle East markets (Jordan, Kuwait, and the UAE). Meanwhile, frozen beef markets include Far-East markets (notably China), regional markets (Mozambique, Egypt, Lesotho, and Ethiopia) and Middle East markets (Kuwait, Jordan and the UAE). 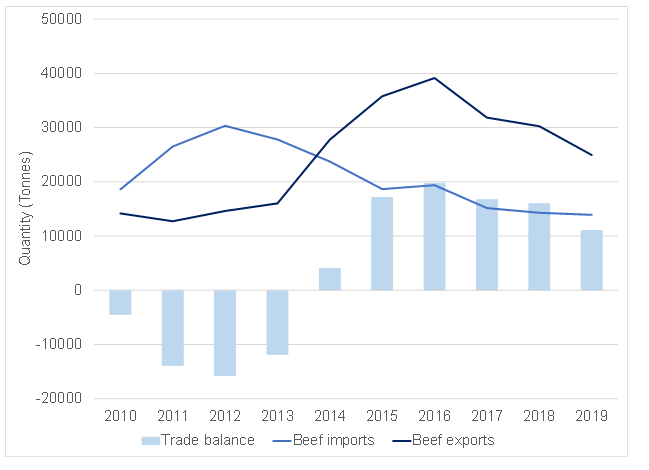 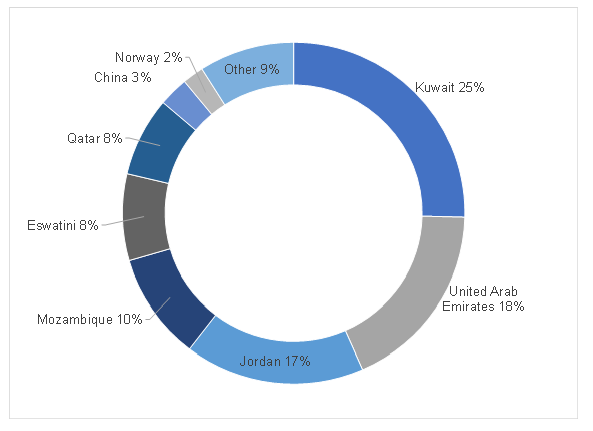 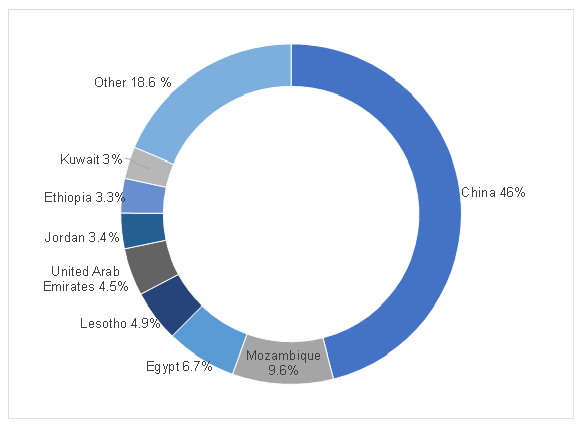 In terms of the other key meat categories, SA will feel a slight impact, but we do not see it as an immediate source of concern. In pork meat, SA remains a net importer of ribs (the most popular cut locally) from Europe. Imported pork accounted for c. 6% of domestic consumption in 2019. Similarly, with poultry, about 20% of domestic consumption is imported, mainly from Brazil, the US, and the EU, among other suppliers. This essentially means that if these disruptions in various meat plants persist for some time and spill over into the global market, SA would not be spared from the price impact, particularly on poultry products. That having been said, we do not see a need to panic at this point. Rather, it indicates to us the need to monitor and strengthen domestic production, where possible.

Overall, disruptions in the meat supply chains in the US, Brazil, Canada and Ireland are important to monitor but we do not foresee an immediate threat to local supplies in the near term. This is because of SA’s relatively low dependency on meat imports and, specifically, beef.

With regards to grain production, the good news continues rolling in. SA’s 2019/2020 summer grains and oilseeds harvest looks to be the second largest on record. Data released on 29 April 2020 by the national Crop Estimates Committee (CEC) forecasts that SA’s 2019/2020 summer grains and oilseeds production could increase by 32% YoY to 17.5mn tonnes. While this is only the third estimate for the current season (with six more to follow), if it does indeed materialise, this could be the second-largest harvest on record after the 2016/2017 crop. More specifically, the 2019/2020 maize, soybeans and sunflower seed harvest are forecast at 15.2mn tonnes, 1.3mn tonnes, and 731,210 tonnes or YoY production increases of 35%, 10% and 8%, respectively.

The maize increase is largely due to an expansion in area-planted and expected improvements in yields on the back of favourable weather conditions during a greater part of the season (i.e. increased rainfall). As mentioned previously, these data prints essentially mean that SA will remain a net exporter of at least 2.5mn tonnes of maize in the 2020/2021 marketing year (which starts in May 2020 and ends in 2021) – a 80% YoY increase.

This comes at a crucial time, as Southern and East African maize import requirements look set to outpace those of the previous year. Zimbabwe’s 2019/2020 summer grains production season started on the back foot due to unfavourable weather conditions. The International Grains Council forecasts Zimbabwe’s 2019/2020 maize production at 800,000 tonnes – less than half of what that country needs (estimated at 2.0mn tonnes).

In East Africa, Kenya, Somalia, and Uganda could experience crop losses as the locust plague continues to spread. These countries will also require maize imports. Furthermore, with a bumper maize harvest of 15.2mn tonnes, SA could potentially export maize beyond the African continent to other high-growth potential markets such as Japan, Taiwan, Vietnam and South Korea, who were not prominent in the 2019/2020 marketing year (which notably ends this month). Naturally, this is dependent on the level of global supply chain disruption amid the COVID-19 pandemic.