Africa and COVID-19: A continent bracing itself for the worst

Following a tentative economic recovery in 2019, the African continent was, in aggregate, set for an improved 2020 economic performance. Better weather conditions, signs of rising demand for commodities, an increase in the pace of infrastructure outlays and accommodative monetary policies in key African markets looked set to boost the continent’s economic recovery. However, the unprecedented nature of the current global COVID-19 pandemic poses elevated downside risks to the continent’s economies, with poorly diversified commodity exporting countries, in particular, the most vulnerable. Whilst the number of coronavirus infections in Africa remains considerably lower than elsewhere in the world, it is nevertheless increasing. In order to avoid a widespread pandemic that would overwhelm the continent’s generally less-developed healthcare sectors and add to the already elevated fiscal cost through significantly higher healthcare spending, governments have closed their borders and instituted emergency lockdown provisions in an attempt to curb the spread of the virus. Overall, the combined effect of border closures, global trade disruption, commodity price declines and financial market volatility is notably deteriorating economic conditions for the majority of countries across the continent.

The most impacted African economies are projected to be those with poor healthcare systems, those that rely heavily on tourism, international trade, and commodity exports, and those with high debt burdens and a high dependence on volatile international financial flows. The overall impact of the pandemic on socioeconomic outcomes, however, remains uncertain. Naturally, it will depend on the unfolding epidemiology of the virus, the extent of its impacts on demand and supply, the effectiveness of public policy responses, and the persistence of behavioural changes amongst communities.

However, Africa does not stand in isolation and one has to consider not only the direct consequences of the COVID–19 pandemic but also the associated ripple effects on other aspects of both the global and domestic economic environments. The IMF forecasts global GDP to fall by 4.9% YoY in 2020, compared with a pre-COVID–19 growth projection of 2.9% YoY. Furthermore, business confidence indicators around the world, such as the industrial production indices and purchasing managers indices (PMIs), especially for Africa’s major trading partners, have only just begun to normalise, with China seemingly recovering faster (see Figure 1). 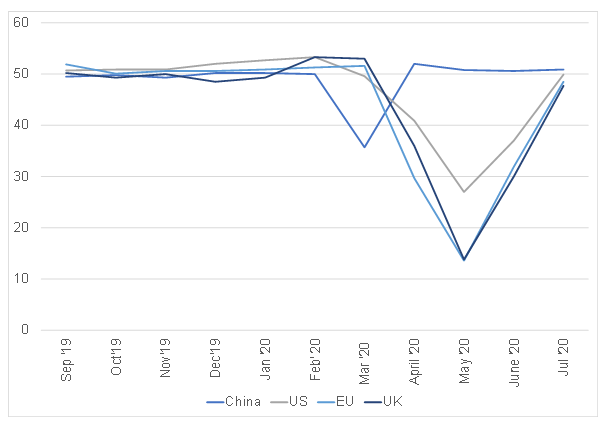 Composite PMIs measure the activity level of purchasing managers in both the manufacturing and services sectors. A reading above 50 indicates expansion in these sectors, while a reading below 50 indicates contraction. Commodity indices — especially for energy and metals, two of Africa’s major export categories — have declined significantly since the onset of the pandemic (see Figure 2). Oil prices could also remain subdued if production cut agreements among the Organisation of Petroleum Exporting Countries (OPEC) and other oil-exporting countries (primarily Russia) are not adhered to. 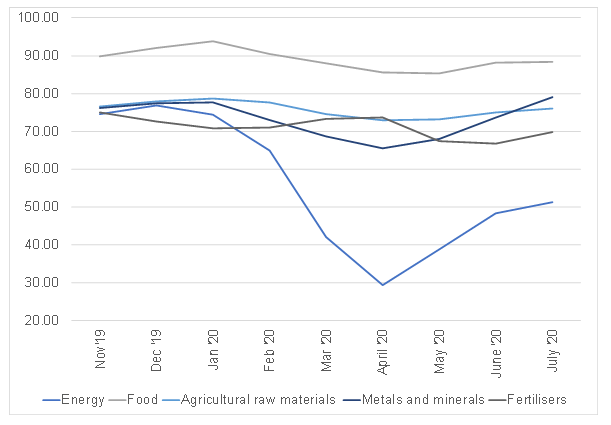 Rising volatility in global financial markets implies tighter financing conditions for Africa. The CBOE Volatility Index (VIX), a measure of global market risk and investor sentiment, increased sharply since February 2020, although it has recently slowly begun to stabilise. In addition to the pandemic and the challenging external environment, some domestic factors compound the situation, including weak healthcare systems coupled with limited coverage of social protection mechanisms. Notably, many African countries entered the crisis with pre-existing fiscal vulnerabilities arising from high debt and low revenue collection, weak external positions, and limited reserve buffers. These adverse domestic and external environments will once again test Africa’s resilience, much like during the recent Ebola and global financial crises.

Whilst 2020 GDP growth is expected to decline for all economies across the continent, there will likely be significant variations across country groupings and regions. Oil-exporting economies such as those of Algeria, Angola, Equatorial Guinea, Libya, and Nigeria, and other resource-intensive economies, such as Botswana, South Africa (SA), and Zambia, will likely witness the sharpest declines in projected growth. Tourism-dependent economies including Mauritius, São Tomé and Príncipe, and Seychelles are projected to be the most severely affected. Growth is expected to be more resilient in non-resource-intensive economies such as Côte d’Ivoire, Ethiopia, Kenya, and Senegal. Most of the countries in this group entered the crisis with very strong average growth rates of above 5.6% in 2019.

Regionally, East Africa is projected to record the most resilient performance amid the pandemic, entering the crisis with strong growth of 5.2% YoY in 2019. This region is generally better shielded by its wider economic diversification and its lower reliance on primary commodities. All other regions will likely experience negative growth rates, with Southern Africa being impacted the most (largely driven by the economic decline in SA, adverse weather conditions, and a fall in commodity prices).

Taking a closer look at the direct impact of the pandemic itself we note that, as of 18 August, the number of confirmed COVID–19 cases in Africa stood at 1,132,795, with a total of 25,946 reported deaths. However, it is important to consider these figures with a pinch of salt – reported numbers are likely to be understated because of the limited testing capabilities in most African countries. Countries in North Africa and Southern Africa appear to be the most affected to date, while the number of cases reported in East, Central, and West Africa have been lower. Still, the differences could be due to lags in testing or variances in mitigation approaches. Overall, we believe that Africa is inadequately prepared to contain the spread of COVID-19, with the trajectory of the virus being largely dependent on the preparedness of countries to separate and treat infected patients. This poses the major risk of a public health emergency because of the region’s high vulnerability to disease and low healthcare system preparedness.

The Global Health Security Index, a comprehensive assessment of a country’s health system capabilities, shows that most African countries are rated as least prepared. Only 21 of 54 African countries are classified as being more prepared from a clinical perspective to deal with epidemic’s threats with international implications. The other 33 are described as being ill-equipped and least prepared to respond to the outbreak. Nevertheless, despite the harshest of forecasts and the continent’s low healthcare system preparedness, overall Africa has thus far held up relatively well with regards to both the spread of the virus and the overall death rate. The reasons for this one can only begin to hypothesize.

The pandemic has already triggered an increase in inflation on the continent – in some cases by more than 5% in 1Q20. This has mainly been caused by disruptions in food and energy supply, the bulk of which are imported. But for many other countries, a drastic fall in aggregate demand due to the lockdown and other containment measures has eased inflationary pressures, especially among non-resource-intensive economies. Overall, although headline inflation, which includes food and basic energy prices, would be expected to rise, core inflation might remain stable until demand picks up after the pandemic. Furthermore, the economic fallout from the pandemic is expected to trigger expansionary fiscal policy responses across all categories of economies in Africa – further exacerbating already high fiscal deficits.

This worsening fiscal position will be driven by increases in budgetary outlays on COVID–19 related health spending, unemployment benefits, targeted wage subsidies and direct transfers, tax cuts and deferrals. Many African countries entered the crisis period with high debt-to-GDP ratios, which are projected to increase further by up to 10 ppts beyond the pre-COVID trajectory in 2020 and 2021. The sovereign debt build-up is particularly worrisome for us because of the changing risk structure in Africa as a result of the increasing share of commercial debt (eurobonds and other private creditors) and the high foreign currency denomination of Africa’s debt.

Africa is proving an interesting case study when considering the global context of the COVID-19 pandemic. From a health perspective, global health authorities naturally assumed the worst with regards to the trajectory of the virus in Africa. However, thus far, the continent has held up fairly well with regards to both the spread of the virus and overall death rates (albeit with numbers on the rise). As it stands, in our view, the greater risk for Africa stems not from a direct health risk posed by COVID-19, but rather from the economic consequences stemming from the pandemic. The economic fallout from the combined effect of border closures, global trade disruption, commodity price declines and financial market volatility has only just begun. The nature and extent of the long-term economic effects for the African continent will largely depend on the trajectory and evolution of the virus itself.