South Africa’s (SA’s) GDP increased at an annualised rate of 4.6% QoQ in 1Q21, quite a bit above Bloomberg consensus forecasts of c. 3.2% QoQ growth and the SA Reserve Bank’s (SARB’s) projections of 2.7% QoQ growth (also annualised). However, this does represent a deceleration from 4Q20’s revised annualised 5.8% growth rate (4Q20 growth was revised downwards from an initial 6.3% estimate).

It is also important to note that in future, Stats SA will publish the QoQ real GDP growth rate (seasonally adjusted) as the headline rate, and not the annualised rate. The QoQ annualised rate shows what the annual growth rate would be if the QoQ rate were to occur over four consecutive quarters. During periods of steady economic growth, annualising is a useful way of expressing QoQ performance in annual terms. However, during times of economic instability, annualising can be misleading, because it exaggerates growth rates that are unlikely to be repeated. For example, largely because of the COVID-19 pandemic and lockdown regulations, real GDP contracted sharply in 2Q20 and then rebounded strongly in 3Q20. However, by looking at GDP growth that has not been annualised, it comes to 1.1% growth in 3Q20.

Interestingly, the agriculture, forestry, and fishing industries performed poorly in 1Q21 in comparison with 4Q20, dragged lower by weaker production figures for field crops and animal products. Despite this being the third-consecutive quarter of growth, the SA economy was still 3.2% smaller than it was in 1Q20, leaving SA as a laggard in the recovery to pre-pandemic real GDP levels. 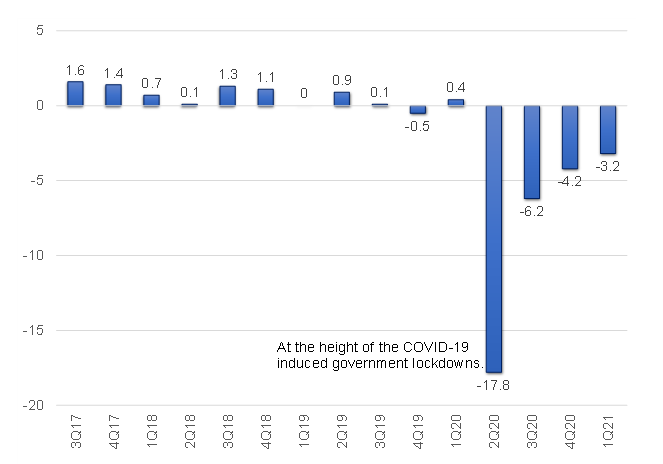 Overall, it is clear that the COVID-19 pandemic and lockdown restrictions significantly disrupted the local economy. Real GDP stood at R782bn in 1Q20 (January to March 2020) but in 2Q20 (April to June 2020), when government-induced lockdown restrictions were at their most stringent, economic output slumped to R652bn. The latest print (1Q21) shows GDP at R761bn, while nominal GDP was estimated at R1.3trn in 1Q21 – down R48bn vs 4Q20.