Tencent reported disappointing 3Q19 results on Wednesday (13 November), which saw Prosus, which holds its largest shareholder, Naspers’ internet holdings, and Naspers, close the day c. 2.4% and c. 2.5% lower, respectively. Tencent’s total revenue came in at CNY97.2bn ($13.7bn]), a 21% YoY increase but still 2% below the consensus analysts’ estimate of CNY99bn. This compares to 21% YoY growth reported in 2Q19 and a 16% YoY rise in 1Q19. So, arguably, this means we have not seen the degree of acceleration off what was already a pretty soft base that had been expected. Meanwhile, net profit of CNY20.4bn ($2.9 bn) was down 13% YoY (from CNY23.3bn in 3Q18) on the back of weaker media advertising and desktop games results. It was also below the Bloomberg consensus analysts’ estimate of CNY23.5bn.

Tencent reported non-IFRS earnings growth of 24% YoY – also 2% below consensus, while basic earnings per share were CNY2.151. However, we note that the comparative period last year was when Tencent was suffering from China’s ban on new online game approvals, so the base was also soft. Market expectations were that growth momentum should have been picking up from this quarter going forward. IFRS earnings were down 13%. The big difference between IFRS and non-IFRS earnings is the lumpy fair value gains and losses that come through the income statement from the investment portfolio. There was a particularly large gain booked in the comparative quarter, which did not repeat.

As far as areas of weakness relative to expectation are concerned, revenue from PC gaming was soft (it fell 7% YoY). PC gaming revenue is relatively mature and is falling slowly as mobile gaming takes over. This period was weaker than expected because it seems Tencent had a poorer response to its eleventh anniversary content update for Dungeon & Fighter, which attracted fewer paying users than expected. In addition, advertising revenue remains weak – partly due to the macro environment and in part because of uncertainty around the screening of some of its flagship dramas which made related advertising more difficult to sell. These issues did not strike us as structural and management made the point that it is seeing momentum in advertising picking up. Historically, Tencent has not relied particularly heavily on advertising revenue. This means that it is still under-indexing in this area relative to its potential, which we believe insulates it to a considerable extent from what is undoubtedly becoming a more competitive field to sell online advertising inventory.

Tencent pushed the point that this is the first anniversary of its strategic pivot away from consumer internet towards what it calls the “industrial internet” (enterprise/cloud solutions etc.). If one thinks back to the major pivots the firm has made before (the diversification from gaming into social media; and then the switch from PC-based gaming/social media to mobile), these have proved (with the benefit of hindsight) to be visionary steps for it. In our view, the move towards enterprise could prove to be on a similar scale if it works. Management is pushing the point that these initiatives are now starting to come through and showing up in a more diversified business than was the case before. What it now calls “FinTech and Business Services” grew revenue 36% YoY and accounts for 27% of Tencent’s total revenue, and this is where most of this enterprise activity sits.

Tencent was also pushing the progress it is making towards internationalising its gaming business. Historically, Tencent has generated about 97% of revenue/profit in China. It was mentioned that, out of a $100bn global gaming industry, China accounts for ~$30bn. Gaming is undoubtedly the area where Tencent is best placed at this point to move internationally. It certainly looks interesting in the context of its ability to play more seriously for the other two-thirds of the gaming market, where it has been significantly under-represented until now.

From a free cash flow perspective, Tencent generated $5.4bn in the quarter under review. Net debt sits at ~$1bn, which gives one a sense of how quickly this business moves into a net cash position if it stops acquisitions.

While the market response was unflattering, we were not as disappointed in these results. Tencent has been weak in the past month or so. Having hit a peak of HKD400 earlier in the year, the share price has pulled all the way back to HKD327. It certainly seemed that investors were anticipating weakness into these results. Currently, it is trading on a fwd PE of 27x, which is undemanding relative to its history. One would think this disappointment is largely already in the price at these levels. In the short term, it may be unrealistic to think it stands much chance of re-rating again until it starts to beat consensus forecasts. It has been disappointing for the past 4-5 quarters. However, with a longer-term investment horizon in mind and with Tencent’s greater diversification helping sustain growth in the 20%-25% range, this looks like a compelling entry point. 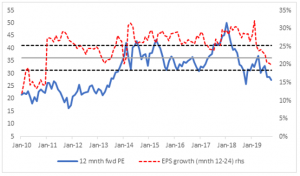