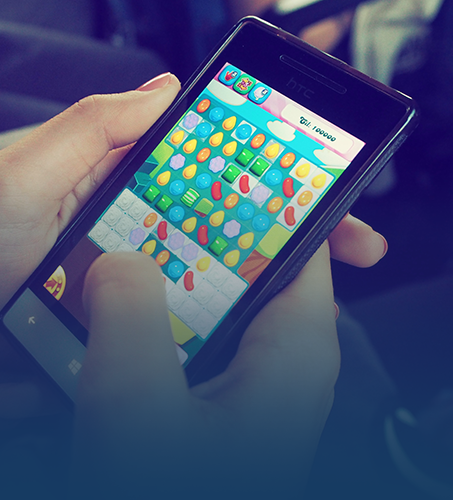 According to MediaKix, the global mobile gaming market is forecast to grow at a robust pace (of c. 60%) from 2018 to 2023, with the world’s mobile gaming population expected to increase from 2.2bn last year to 2.7bn-plus by 2021. Statista defines a mobile game as any video game that is played on any mobile device including phones, tablets, media players and even calculators. The mobile gaming industry globally is projected to reach $106bn in revenue by 2021 – an impressive feat considering revenue stood at only $12.7bn in 2012, meaning that the industry will increase revenue by over 730% over nine years.

In 2018, mobile gaming revenue accounted for 50%-plus of the global games market as it reached $70.3bn, with its market share predicted to rise to 59% by 2021. To contextualise this performance – the $70.3bn in revenue generated by the global mobile gaming market last year was c. $30bn more than total 2018 global box office revenue of $41.7bn (itself a record).

China is the country where mobile gaming is by far the most popular, accounting for 25%-plus of global mobile games revenue, according to Niko Partners. A key driver being that China’s average mobile user owns a relatively cheap, but high-performance mobile phone, enabling them to easily play mobile games. So many people have smartphones, that it is also an appealing market for developers of both games and hardware, helping it grow quickly into a space that can stand alongside the likes of consoles and computer games. 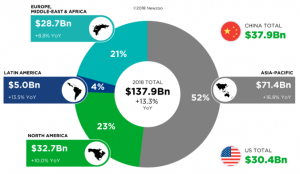 Apple’s App Store and the Google Play store are dominated by mobile games and, according to gaming research firm, Newzoo, mobile gaming app revenue generated over three-quarters of total app store revenue in 2018, and there were over 2bn global players. In terms of revenue, China’s mobile games market it is expected to spike by over $8bn in the next five years, growing from $16bn to $24.7bn in domestic revenue by 2022. As the fastest-growing gaming segment, China’s mobile gaming market is forecast to overtake online PC games this year, accounting for just under two-thirds of total games revenue by 2022. Buoyed by a rise in female gamers, China’s mobile gamers have a projected annual growth of 5.2% over the next few years, reaching a total of 720mn mobile gamers by 2021.

North America is also expected to emerge as a leading region due to early adoption “of technological advancements in wireless and multiplayer gaming”, with the region also being the hub for major gaming developers. With mobile devices more advanced (and accessible) than ever before, c. 77% of Americans now own a smartphone, while globally there are c. 3bn smartphone users, according to Mediakix. This has turned out well for mobile gaming since anyone with a smartphone literally has a video game at their fingertips – available anywhere, anytime.

Figure 2: Growth of mobile gamers in the US, mn 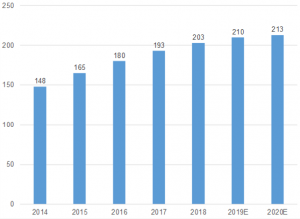 In terms of top-grossing mobile games, as at end December 2018, Pokemon GO generated $1.4mn in daily revenue, with Fortnite in second spot at $1.3mn per day (see Figure 3). Candy Crush, originally released 7 years ago, currently generates $1.1mn in daily revenue (it has also seen three spin-offs) and factors contributing to the games’ success are its easy format and the fact that all games are free for download. 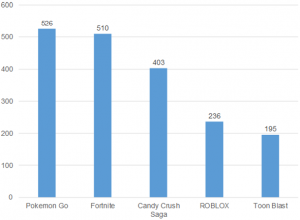 Despite its impressive growth, China’s gaming market had a difficult 2018 across all platforms after the Chinese government banned all new game releases from March-December 2018, forcing publishers to look abroad to increase market share (the ban was eventually lifted in December 2018). During that period, mobile gaming approvals by government dropped significantly from 8,039 in 2017 to only 1,872, according to a recent IHS Markit report. What had been double-digit growth in the games market slowed significantly due to the suspension of government licenses and the introduction of regulations to improve the protection of minors “from the harmful effects of playing games.” This impacted companies (such as Tencent and NetEase), which nevertheless saw an increase in mobile gaming revenue outside of China last year. The data show that combined international mobile revenue increased 505% YoY in 2018 to $472mn.

So, what is driving the popularity of mobile games? Newzoo writes that in just “… the span of a decade, mobile gaming will have grown from the smallest segment in 2012 to a $100bn-dollar industry in 2021”. Below, we highlight several factors that have driven growth:

Easy accessibility – The main reason for the impressive growth is that mobile games are easily accessible – almost everyone has a smartphone and an individual’s phone is always with them. People spend several hours daily checking their social media accounts, messaging, and playing mobile games.

Increased mobile population: Another driver is the large number of people with smartphones and getting their first smartphones in regions such as, for example, south east Asia. Similar to the rise of China’s mobile population being largely responsible for the boom in total mobile game revenues over the past few years, so the likes of India (c. 1.4bn people) and Indonesia (c. 260mn) will likely drive mobile games growth in the next decade.

Low costs – Most games can be played for free.

Advertising – Following on from the point above, according to AppsFlyer’s report on The State of Gaming App Marketing 2018, 50%-plus of gaming revenue in several genres is now primarily supported by advertising especially mobile. In-app ad monetisation is increasing for hyper-casual games. Meanwhile for casual games, there is a c. 60:40 split in favour of ad monetisation vs in-app purchases. However, in the case of strategy games, 70% of all revenue still comes from purchases. Bottom-line brands also see mobile games as valuable promotional tools with increased interest in game integrations by way of custom branded levels, branded game menus etc.

In-app gaming purchases not popular in EMs – We note though that the report found players in developed markets (DMs) are three-and-a-half times more likely to pay for games than gamers in EMs.

A rise of hyper-casual games – these games saw a 350% rise in popularity last year.

The Chinese mobile gaming market continues to be the biggest in the world, although growth slowed slightly due to the impact of increased regulations. In-app advertising is the most popular way to monetise apps, vs in-app purchases. Finally, mobile games are becoming increasingly compact, designed to play in short but recurring sessions. Using applications like WeChat to host these games without needing to download a separate application, the future points towards mini-games and hyper-casual games continuing to dominate the market.