Below we introduce a fair value gauge of the Rand against the US Dollar.  Forecasting the Rand is a fool’s errand. No model is able to predict this and we must accept that actual USD/ZAR will be different from the modelled value for long periods of time. We have settled for a Purchasing Power Parity model which depreciates the Rand by the inflation differential between South Africa and the United States. This model has been shown to have an R2 of 76% over time (meaning it explains about 76% of the move).

We know that on average the Rand has traded within a R2.50 range from strongest to weakest over a year. In this context, we have put a R2.00 band around our PPP fair value. When the Rand is within that range, then to us it is fair. When it is above the range it is cheap and conversely it is expensive when it is below the range. This also means that at least once a year, we would expect the currency to trade outside of our range.

We have discussed a number of times that the challenge with the PPP model is that your starting point determines your outcome. This is true, however, by looking a range of possible outcomes rather than trying to predict spot, we deal with this to a degree.

In the context of rising global interest rates, a strong US dollar and negativity towards the emerging markets it is natural to expect that the Rand is on the cheap side of fair. This is clearly evident in the graph. We note that at R14.70 it is actually just outside of our range and it has traded much further away from fair in 2002, 2010 and 2016. Simply put, now is not the time to go all in on the currency reverting back to fair. It is really just a touch on the cheap side.

We have seen some work on the amount of time that the currency is outside of the fair range. When it pushes too high or too low versus our model, it has on average remained that way for just over two years. This means that while the rand is a little on the cheap side of fair right now, it could very reasonably remain so for the next two years.

The fair value of the Rand is date dependent under the PPP model. Therefore, while midpoint of the fair value range is 12.80 right now, this will have pushed out to 13.40 at 30 September next year. Based on this fair range, we can graph the PPP versus spot and also we can create a gauge which shows when the Rand is outside of our range and how extreme this is from a statistical perspective (measured in Z-scores). Perhaps what our CEO Peter Armitage often says is most important, “In ten years’ time, the fair value of the Rand is likely well over R20 to the dollar. So, when looking to take long term cash out of South Africa, it doesn’t really matter if we do it now or at R13.00, the outcome will be good in the long run.”

If you like to discuss taking money offshore or how to trade forex, contact one of our portfolio managers at [email protected] or call us on 011 591 0677. You can also read more about our products and services here. 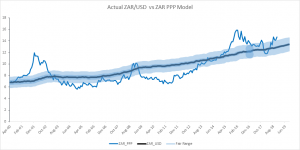 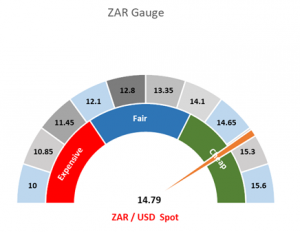